The $1 million Breeders' Cup Juvenile Fillies Turf (G1) featured a full field of 14 two-year-old fillies going 1 mile on the turf. Moyglare Stud (G1) and Cheveley Park Stakes (G1) runner-up Meditate was sent off as the 2-1 favorite. In to challenge her included 6-1 second choice Pleasant Passage, winner of the Ms. Grillo Stakes (G2) at Aqueduct, and 7-1 third choice Xigera, 4th in the Alcibiades (G1) on dirt after breaking her maiden on the Saratoga turf. 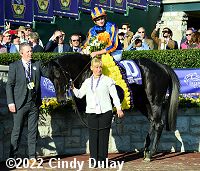 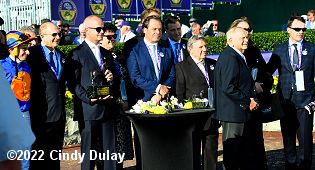 Left: Meditate in the winner's circle. Winning trainer Aidan O'Brien said, "Ryan was very patient. He let her go to sleep the first half of the race because of where she was drawn. He saved all the gas all the way. And we were delighted as a result. But we always felt she was very high class."

Right: The trophy presentation for the Juvenile Fillies Turf. Winning jockey Ryan Moore said, "She was always very comfortable. And she started well. She's got a lot of pace. There's a bit of speed inside of me that went forward early. And I thought we'd just come back. And the pace steadied once we got around the bend. And I just walked myself out wide. I was following a filly I didn't want to be following, but the pace was slow so that brought me far enough. She had them covered very quickly. And the race was over a furlong and a half out and I felt she had a lot left." 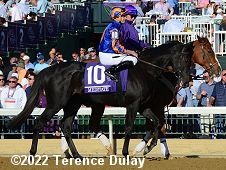 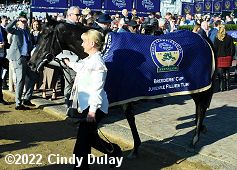 Left: Meditate heads out to the track. Moore added, "She was probably just a level above all of them. She really showed her class today. Very straightforward, does everything you want her to do."

Right: Meditate heads back to the barn after the race. O'Brien added, "I think she's fine on the ground. But Ryan said to me, when he came in, listen, we just need to ride her more patiently. And I think probably for me that's how I would have learned from listening to Ryan after the race and what he felt today. So that's great. So at least we know that she will get a mile, but ride her patiently. Maybe I was giving Ryan the wrong instructions in telling him to be riding her too forward. I suppose when she went up and tripped that suited her better, Ryan, really." 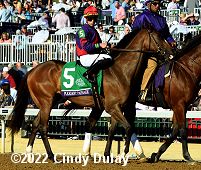 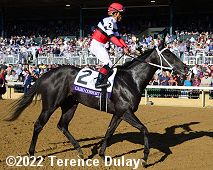 Left: Second place finisher and beaten favorite Pleasant Passage in the post parade. Trainer Shug McGaughey said, "I thought she ran great. She missed the break just a tad, but I loved her position back there. When the winner moved, we sort of had to wait a little bit. When she got clear in the stretch I thought she finished really well." Jockey Irad Ortiz Jr. added,  "Beautiful trip. I dropped in and saved some ground. I had the winner beside me going into the second turn and I could tell he had horse. I just followed him, but had to wait a bit. My filly responded really well. I was happy with her."

Right: Third place finisher Cairo Consort returns after the race. Trainer Nathan Squires said,  "We came here hoping for the best and hoping we would finish in the top three. At the top of the lane, it looked like she could do it, but she hung on for third. She's an honest filly, as honest as they come. No one wants to blame anything about the last race – that's racing luck– and we looked at the tape because we had to and we decided we should bring her here. She broke well today and she ran absolutely great. Phenomenal. I'm very proud of her and so happy – this is my first Breeders' Cup and my first time here."

The fillies break from the starting gate for the Breeders' Cup Juvenile Fillies Turf. Joel Rosario aboard third place finisher Cairo Consort (2) said, "She ran great. She broke well and had a good inside trip, but I think the winner was much the best. She ran her race so we're happy with it."