The $2 million FanDuel Breeders' Cup Juvenile (G1) presented by Thoroughbred Aftercare Alliance features 2-year-old colts and geldings going 1 1/16 miles on the main track in a race that usually determines the early Kentucky Derby favorite for next year. Keeneland Futurity (G1) and American Pharoah (G1) winner Cave Rock was sent off as the 1-2 favorite in the field of 10. In to challenge him included 5-1 second choice Forte, winner of the Breeders Futurity (G1) at Keeneland, and 8-1 third choice National Treasure, second in the American Pharoah. 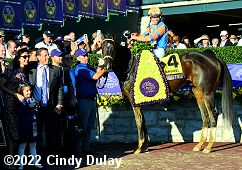 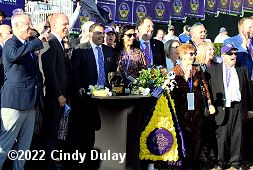 Left: Forte in the winner's circle. Winning trainer Todd Pletcher said, "He got a beautiful trip. Just kept coming. I think we both got a fair run at it today (referring to being second choice to Cave Rock). He got that two-turn experience (in the Breeders' Futurity) and it paid off today. He's much more professional today. We learned a little something (from the Breeders' Futurity) and we tweaked off the last race and it paid off coming here. Today, if we were lucky enough to get in a position to get (the lead), we wanted to give ourselves plenty of space and not get close to the horse next to him."

Right: The trophy presentation for the Juvenile. Winning owner Mike Repole said, "Cave Rock's numbers are incredible. But one thing we saw was all West Coast races, first time he's really shipped halfway across the country. I would also say -- Baffert is an amazing trainer, but when he has four horses out of seven in the race, okay, you go first, you go second, you go third. They don't go four across the track." 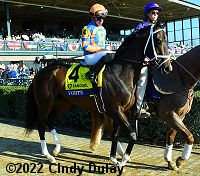 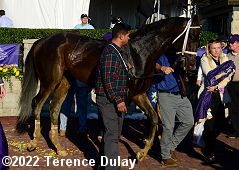 Left: Forte heads out of the tunnel from the paddock to the track. Winning jockey Irad Ortiz Jr. said, "Beautiful trip. I broke good, saved some ground around the first turn and took my time down the backside. I started making my move around turn. I hit him once and he responded. He deserves all the credit."

Right: Forte heads back to the barn. Repole added, "I really think (Pletcher) is going to make the Hall of Fame. I didn't really give Irad the proper shout out. Irad is an Eclipse Award-winning jockey this year. He's so good right now. There's such incredible talented jockey pool. But you almost have Irad here. And two to 12 is like nose to finish. But Irad, he's got five lengths on the field right now." 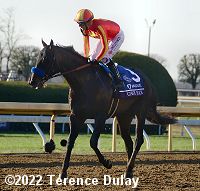 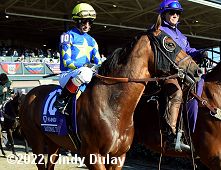 Left: Second place finisher and beaten favorite Cave Rock returns after the race. Trainer Bob Baffert said, "I knew they went very fast early and I thought Juan (Hernandez) did a good job. He stayed away when they were going fast and slowed it down. He didn't switch leads until way late. He got tired and that other horse came running. He ran a big race. There is a reason why he won three in a row. He'll get a lot out of it. He's a big, strong horse. It's a different kind of surface, but he had every chance to win, even though he was going fast."

Right: Third place finisher National Treasure heads out for the post parade. Trainer Bob Baffert said, "He ran a great race. He's getting better and better. Johnny (Velazquez) had him in a perfect spot. He just hasn't caught up with (Cave Rock) yet." Jockey John Velazquez added, "I thought I'd be a little closer. I was fourth early. I caught up to him and I thought he had done that pretty easy, but that's all there was. He's still learning." 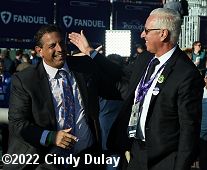