Jockey Joel Rosario sent Jackie's Warrior to the front out of the chute through fractions of 21.91 and 44.11 while pressed by Special Reserve and stalked by Dr. Schivel. Turning for home Dr. Schivel gained a short lead through 5f in 56.05 but 11-1 fourth choice Aloha West, 6th early under Jose Ortiz, rallied to just get up by a nose in 1:08.49. It was another 2 1/2 lengths back to Following Sea third. 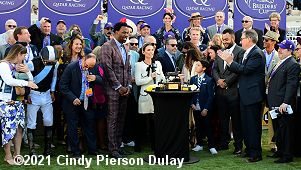 Left: Aloha West in the winner's circle. Winning trainer Wayne Catalano said, "The horse is an unbelievable horse. He runs incredibly, as everybody knows. He trains like lights out. And all the way up to this race I told Aron he's training like you want a horse to train. That's all you can ask. When they come in and train like that, I'm like, we're on."

Right: The trophy presentation for the Sprint. Winning owner Aron Wellman said, "It's surreal to be here. This is my home track. I live five minutes down the road from Del Mar Racetrack, so to do it here with my family, this guy right here, he's a treasure to the racing industry and a Hall of Famer in my book. And Jose and I have had some incredible moments together. We won a classic four years ago and now to win a Breeders' Cup with him, it's just I'm surrounded by class. And the horse of course deserves the most credit of all. He's an incredible specimen that there's no telling how good he can be." 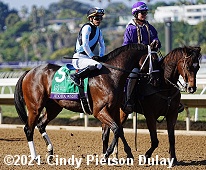 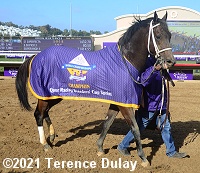 Left: Aloha West in the post parade. Winning jockey Jose Ortiz said, "I was thinking on the half going into the three-eights and I was very happy when we hit the quarter pole but I wasn't sure if I was going to be good enough to catch him, because they have a very good horses in front of me. And I look at the 9 horse and he was the best horse early, so I decide to swing wide. And my horse, he gave me a great kick. And when we hit the wire, honestly, I don't ride here on a daily basis, so I just ride hard, three or four jumps to the wire and I thought I had it, I wasn't sure."

Right: Aloha West heads back to the barn after the race. Catalano added, "We've been fortunate enough to have some good horses, some good clients, and some good people working for me, and all that. A good ride honestly by Jose today up to the last ride." 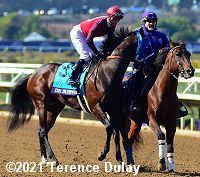 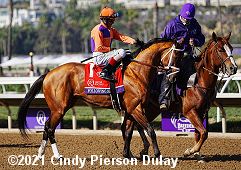 Left: Second place finisher Dr. Schivel in the post parade. Jockey Flavien Prat said,  "That was a tough loss. He was running really strong and didn't see the winner coming as I did not look up."

Right: Third place finisher Following Sea in the post parade. Trainer Todd Pletcher said, "He ran great. He had a good run up the rail and the door closed on him. He had to alter course and re-rally. Looked like he could have been right there if he could have snuck through." 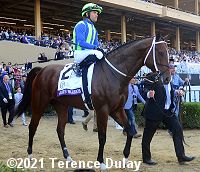 Sixth place finisher and beaten favorite Jackie's Warrior heads out to the track. Jockey Joel Rosario said,  "He broke really well and was running easy early on. Sometimes it is just hard to win all the time.  He gave his best and we were just outrun. On the far turn, two horses came to me a little bit, I could see they were moving better than we were. He always fights but, as I said, you can't win all the time."