Jockey Irad Ortiz Jr. hustled Golden Pal to a clear lead immediately and he set fractions of 22.25 and 43.91 while chased by Lieutenant Dan and 17-1 Caravel. In the lane Golden Pal continued to hold his lead, cruising for the final furlong to win by 1 1/4 lengths over Lieutenant Dan in 55.22. It was a long 3 1/2 lengths back to 28-1 Charmaine's Mia third. 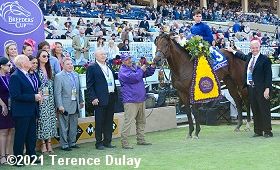 Left: Golden Pal in the winner's circle. Winning trainer Wesley Ward said, "He's very quick and very agile as you've seen today and my only concern with the race today was the first jump. I knew if he broke with them that his quickness and his agility would just bounce him out like he did. And not only did he break with them, he broke in front of them. And then Irad I think he was a little bit surprised the first few strides how he just kind of opened up like he did on such fast horses. So I was very happy with the first few strides."

Right: The trophy presentation for the Turf Sprint. Winning owner Derrick Smith said, "He's so sound right now and like he said, he's lightly raced, and his stallion value, if he can do this over on the other side over there in Ascot it just makes him worth so much more, if he can show what he does here over there. Being a turf sprinter sire -- he's not just a turf sprinter, I kept him on there because he was a little fragile early on, but his workouts on the dirt have been eye-openers, so that's something, if we do decide to move forward that's something that would also be in consideration. This way breeding-wise he'll be open to either surface." 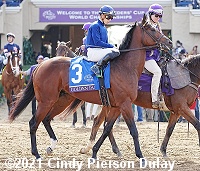 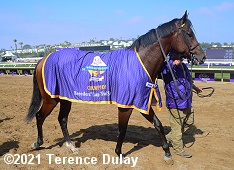 Left: Golden Pal in the post parade. Winning jockey Irad Ortiz Jr. said, “I was happy to get the lead easily and he responded to me when asked I him for the run down the stretch. I was confident coming for home and he still felt very strong. He was ready today.”

Right: Golden Pal heads back to the barn after the race. Ward added, "He ran such a great race at two at Ascot. And he's the type of horse that really -- he's had all of his workouts -- we've had a lot of rain at Keeneland and all of his workouts have been on deep surfaces, and he's just kind of guided through it. So the track condition over there, no matter what it is, he can handle. That's always a big question for American horses. So he can handle a soft or heavy ground or firm ground." 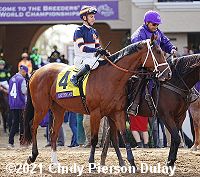 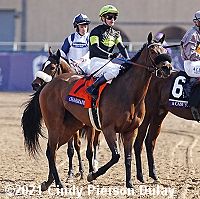 Left: Second place finisher Lieutenant Dan in the post parade. Trainer Steve Miyadi said, “He wasn’t ready to run against a rocket ship. He ran great, probably the best race of his life.” Jockey Geovanni Franco added,  “I had a great trip.  He gave us a great race, I thought.  He always tries very hard for us.  I’m not disappointed in his effort.”

Right: Third place finisher Charmaine's Mia returns after the race. Trainer Phil D'Amato said, “I was very happy with her performance. The top two horses are extremely nice colts. My filly is so game and outfinished the rest of the field. She’s a G1-placed filly now going to sell at Keeneland. I would love to train her again, but I know she’s at a stage when some like to breed them. If she goes back into training, I would love to train her again.”