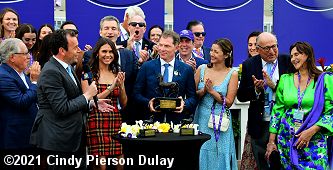 Left: Pizza Bianca in the winner's circle. Winning trainer Christophe Clement celebrating his first Breeders' Cup winner said,  "Very nice. Great win. I'm delighted. I was surprised with (agent) Ron Anderson and Rosario didn't ride the filly because we always thought that she a nice one and she proved us right today. I'm absolutely thrilled with the confidence showed in us. It's nice."

Right: The trophy presentation for the Juvenile Fillies Turf. Winning owner-breeder and celebrity chef Bobby Flay said, "He's the best trainer in the world that hasn't won the Breeders' Cup, and I'm glad that that story's over. He is a very deserving trainer. Listen, my favorite thing to do is to go over the mating and breed. And you never know what you're going to get. And this, the dam is a horse that I bought as a yearling who never ran, but her, she has one of the best pedigrees in the stud book, and so I just knew that I was going to keep her for ever because I always say that the blood shows up eventually. And I didn't think it was going to show up in the very first foal, but obviously she's a really great filly." 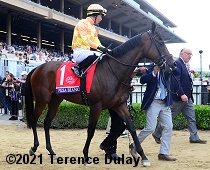 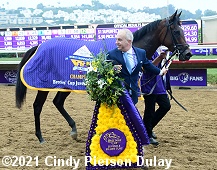 Left: Pizza Bianca heads out to the track. Winning jockey Jose Ortiz said, "For some reason on the second turn I ended up farther back than I wanted to be.  So, I kept going in, going in and finally I got in at the quarter pole. At the eighth pole, I got a perfect split.  I had a lot of horse." 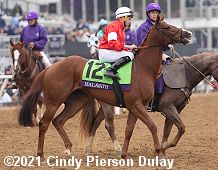 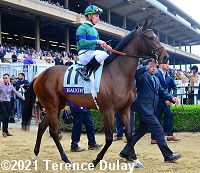 Left: Second place finisher Malavath in the post parade. Trainer Francis-Henri Graffard said,  "I'm absolutely delighted with the run. She gave it her all. It's obviously disappointing to be narrowly beaten however I'm very proud of the filly. She's going to be even better next year."

Right: Third place finisher Haughty heads out to the track. Trainer Chad Brown said,  "Tyler (Gaffalione) rode a great race from that post. I was very happy with the trip. I think, in the end, the three weeks rest really did me in. She made a really big jump in her numbers from her first to her second race and I think I just didn't have enough space between races. Not every horse can do that back in three weeks. I think that's where she lost a little bit of the starch from the quarter-pole home." 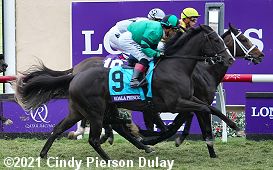 Left: Seventh place finisher and beaten favorite Koala Princess first time by. Jockey Joel Rosario said, "She ran well but hung a little bit. I got stopped a little bit right before the quarter pole but what can I say? We will try another time."

Right: The fillies break from the starting gate for the Breeders' Cup Juvenile Fillies Turf. Tyler Gaffalione aboard Haughty said,  "I felt real confident coming into the stretch. She gave me a nice kick but it wasn't enough to hold off the closers. It was a great performance coming off the maiden victory."