The $1 million Breeders' Cup Juvenile Turf (G1) drew a full field of 14 two-year-olds going 1 mile on the turf. Silver Knott sent off as the 7-5 favorite off his win in the Autumn Stakes (G3) at Newmarket. In to challenge him included 5-1 second choice Packs a Wahlop, winner of the Del Mar Juvenile Turf (G3) and Zuma Beach Stakes (G3), and 11-2 third choice Victoria Road, winner of the Criterium de Fonds and Prix de Conde (G3).

Jockey Francisco Arrieta sent 59-1 Curly Larry and Mo to the lead first time by through fractions of 23.40, 48.29, and 1:13.04 while pressed by 52-1 Mo Stash and stalked by Packs a Wahlop. Turning for home Curly Larry and Mo tired badly allowing Mo Stash to briefly lead through 7f in 1:24.61. Victoria Road, 6th early under Ryan Moore outfinished late-running favorite Silver Knott to win by a nose in 1:35.99. It was another 2 1/4 lengths back to 40-1 Nagirroc third. 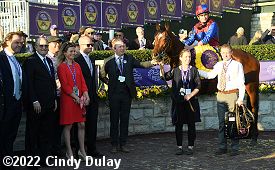 Left: Victoria Road in the winner's circle. Winning jockey Ryan Moore said, "My horse, he was in a nice spot and the pace set again down the back straight. And there was a lot of traffic going into the lane. I thought I would try to get out, Mike was going out, and I was thinking to follow him. There wasn't much room. There was much room, but there was enough of a gap and my horse showed a really good attitude and he quickened and he got through."

Right: The trophy presentation for the Juvenile Turf. Winning trainer Aidan O'Brien said, "Ryan said to me after that he thought he was our French Derby horse for next year. So he's a very exciting horse. He's not big. He's well-balanced. Ryan had him in a lovely spot today. Took his time on him, said he was going to produce him late. I didn't know he was going to produce him that late. But delighted, really." 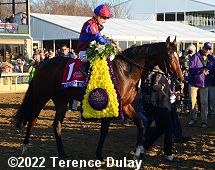 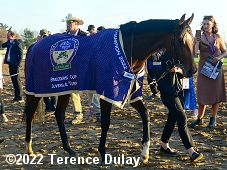 Left: Victoria Road circles after the race. O'Brien added, "We thought when his form changed from he was getting beat a few times early. Then when he stepped up and tripped, looked like he was going to get seven furlongs, when he got seven furlongs, looked like he was going to get a mile. He won over nine furlongs the last time. He's a horse that had pace to run over 5 and 6 no problem. And when you're that type of horse that relaxes the way he does and gets that type of trip, we thought it was going to suit him well."

Right: Victoria Road heads back to the barn after the race. Moore added, "I've been very fortunate to ride for Aidan for a long time now. And I'm very privileged that they produce, I think, the best horses in the world, really. And you can't do it without the horses. Doesn't matter how good a jockey or trainer you are, you need the horses. That's what it's about. We're fortunate, real strong team this year. The 2-year-olds looked good and Aidan's been spot on all year." 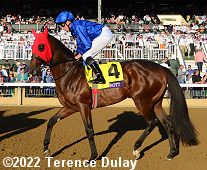 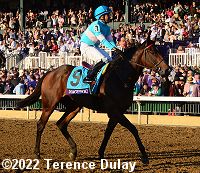 Left: Second place finisher and beaten favorite Silver Knott in the post parade. Trainer Charlie Appleby said, "To be fair, he was slow out of the gate and Will dropped him down onto the rail. To be fair, he was lucky enough to get the splits when he needed them. No excuses there. And it was a headbobber. I thought Aidan had got there at first. The more I watched (the replay), the more I got a little hope. He's run well and lost nothing in defeat. We brought a good team and brought over more horses, at the end of the day. We were confident and they've all shipped well and so far they're running well."

Right: Third place finisher Nagirroc returns after the race. Trainer Graham Motion said, "Manny gave him a great trip. The Europeans are tough in these races. I couldn't be happier with this little horse." Jockey Manny Franco added,   "I had a beautiful trip and everything went my way. My horse gave me his all. He came running in the end he was just a little late. He ran a really big race." 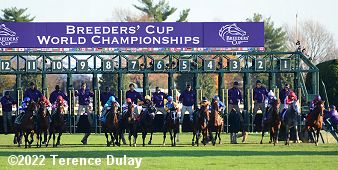 The horses break from the gate for the Juvenile Turf. William Buick aboard Silver Knott (4) said, "He ran a very big race, but things just didn't quite go his way, which ultimately cost him the race."