A field of 12 older horses went 1 1/2 miles starting on Santa Anita's downhill turf chute in the $3 million Breeders' Cup Turf (G1). Irish Champion Stakes (G1) and Yorkshire Oaks (G1) winner The Fugue was sent off as the 3-2 favorite in the field of 12 over 4-1 Point of Entry, winner of the Manhattan Handicap (G1) on Belmont Stakes day, and 11-2 defending champion Little Mike, off his win in the Turf Classic Invitational (G1) also at Belmont. 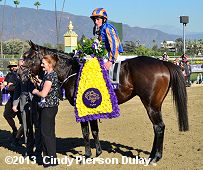 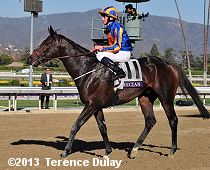 Left: Magician heads to the winner's circle. Trainer Aidan O'Brien, celebrating his fourth Breeders' Cup Turf win said, "Ryan said going out he was drawing a little bit wide, and he was going to go forward and slash him in.  And because the pace was so strong, he was very happy to let him relax. He got him balanced after the bend, and that's an art to do that.  He produced them after the bend long later on, and the run just carried him to the line. He's by Galileo, which is just probably the most incredible stallion that we ever, ever had or probably ever will have anything to do with.  Just don't know when to give up, really.  It's incredible determination and class that he puts into it."

Right: Magician returns after the race. 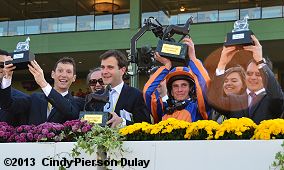 The trophy presentation with owners Paul Smith and J.P. Magnier, jockey Ryan Moore, and trainer Aidan O'Brien. J.P. Magnier said, "(Moore) gave him a lovely, patient ride.  He wouldn't have liked to be back at him halfway, but he obviously knew what he was doing and he gave him a very good ride. Aidan brought him here for a reason.  He must have been confident enough.  So that was very good."

Jockey Ryan Moore said, "He's one of the best horses I've ridden in a long time.  He switched off nice at the beginning. I was a little farther back than I wanted to be because he got a bump at the turn and he lost his back end, but he leveled off nicely, got his balance. From there he took me where I wanted to be." 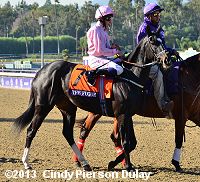 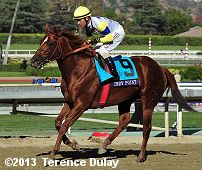 Left: Second place finisher and beaten favorite The Fugue heads over to the turf course. Trainer John Gosden said, "She's run a great race.  We came a bit wide into the straight. We've beaten a very good Argentinian horse (Indy Point), but the form is very hard to assess as the winner (Magician) hasn't run since June. He's a bit of a joker in the pack (deck). She ran her race. She improved her position. She just got beat at the end." Jockey William Buick added, "She did nothing wrong, she did everything right. She felt good to me. She ran well."

Right: Third place finisher Indy Point returns after the race. Trainer Richard Mandella said, "He ran great.  I was very pleased with his effort.  Gary (Stevens) told me he wished he would have gone one way instead of the other. In a race you have to make a quick decision and he did.  I sure will take this race over Arlington (Million, last of 13)." Jockey Gary Stevens added, "He gave me a big run. It was a game effort. He's a very nice horse and I enjoy riding him. He dug in and gave me everything he had. I couldn't ask for anything more from him."