The $1 million Breeders' Cup Juvenile Fillies Turf (G1) featured a full field of 14 two-year-old fillies going 1 mile on the turf. Vorda, winner of the Cheveley Park (G1) at Newmarket, was sent off as the 5-2 favorite over 5-1 My Conquestadory, winner of the Summer (G2) at Woodbine and Alcibiades (G1) at Keeneland, and 6-1 Al Thakhira, winner of the Rockfel (G2) at Newmarket. 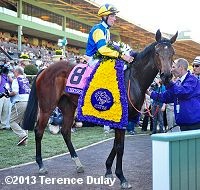 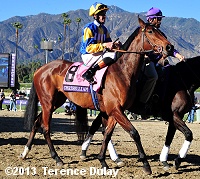 Left: Chriselliam in the winner's circle.

Right: Chriselliam in the post parade. Trainer Charles Hills said, "It's just the icing on the cake this year.  But really, something about being here and it was just the filly, I think.  She's exceptional.  She's got everything you want, really.  She travels very well, and she's so professional, you can put her anywhere you want in the race, and she's also a very good turn of foot. It's not often you can win a Breeders' Cup by taking a pole halfway down the straight.  Just looking forward to getting her home now, and then next year we'll obviously aim for the Guineas.  But just to have a winner out here, it really does mean the world to me." 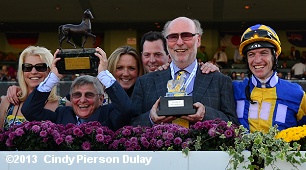 The trophy presentation for the Juvenile Fillies Turf with co-owner Willie Carson, trainer Charles Hills, co-owner Chris Wright, and jockey Richard Hughes. Carson said, "Bloody marvelous.  What else can you say?  The European horses are usually a little bit slow to get going in the first furlong and usually have to overcome that, and he did that marvelously and pushed her up to a very good position.  And actually, my only thoughts then was we're getting a little too close to the inside rail.  Will we get a clean run?  That was my only worry. But when I saw her enter into the straight, I knew the way she was going, it will make a hole.  One wouldn't have to appear.  We could have made one the way she was going." 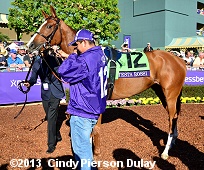 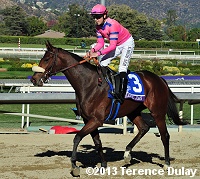 Left: Second place finisher Testa Rossi in the paddock. Jockey Jose Lezcano said, "She broke good, got a good place, and I could have gone outside, but I stayed inside and got through. She gave me a great closing kick." Trainer Chad Brown added, "The winner looked very impressive to me, so I can't say if there was anything that cost me the win. I'm proud of the way (Testa Rossi) ran. She fired another big one for me. She's a nice filly."

Right: Third place finisher Colonel Joan returns after the race. Jockey Joe Talamo said, "She ran an unbelievable race for a maiden. It was a heck of a race. I had a great trip, followed the winner the whole way. She ran an unbelievable race and my compliments to her." Trainer Eoin Harty added, "I'm ecstatic.  I'm over the moon. I'm over the moon for my wife (co-iowner Kathy Harty).  She's by Colonel John who was such a big part of my life." 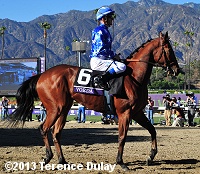 Seventh place finisher and beaten favorite Vorda in the post parade. Jockey Olivier Peslier said, "It may have been the ground today.  She was more comfortable last time at Newmarket on softer turf and the competition was tougher today. She's OK. She'll be all right next year.  The trip wasn't too far."