The $2 million Breeders' Cup Juvenile (G1) features 2-year-old colts and geldings going 1 1/16 miles on the main track, and often decides the early favorite for the next Kentucky Derby. Champagne Stakes (G1) winner Havana, undefeated in 2 starts, was sent off as the 5-2 favorite in the field of 13 over 3-1 Tap It Rich, a debut winner at Santa Anita last out, and 7-1 Strong Mandate, winner of the Hopeful (G1) at Saratoga before disappointing in 7th in the Champagne (G1) at Belmont.

48-1 Conquest Titan and Strong Mandate battled for the early lead through fractions of 22.66 and 45.38 before Conquest Titan tired, allowing Strong Mandate and jockey Joel Rosario to open a 1 1/2 length lead on the far turn through 3/4 in 1:09.70. Havana, who stalked the lead pair in fourth under Gary Stevens, opened up a 2 length lead in mid-stretch through 1 mile in 1:36.66, but 10-1 New Year's Day and jockey Martin Garcia, 8th early, came through on the rail to win by 1 1/4 lengths in 1:43.52. It was another 3/4 length back to Strong Mandate third.

Owner Gary West said, "We've had a lot of nice wins, and we've won a lot of Group 1 races, but this is by far the biggest accomplishment that Mary and I have ever achieved in horse racing.  I think when everybody takes a look at what's happened over the last couple of days with the incredible speed bias, and when you go watch the replay of this race to see the amount of ground that this horse made up, I think it's going to be an impressive race when the sports writers and all the equine analysts take a look at this." 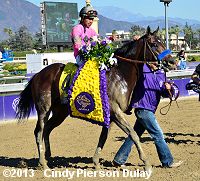 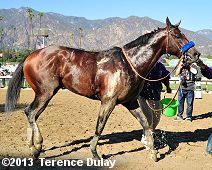 Left: New Year's Day heads to the winner's circle. Jockey Martin Garcia said, "My horse doesn't have that much pace. I was exactly where I wanted to be.  I saved ground at every corner. The rail was open and I took it. I didn't panic.  My horse was ready to start running.  I thought I had a lot of horse.  I had never ridden him in a race, but I have been getting on him in the morning most of the time. We're starting to get to know each other. It looks like a good team."

Right: New Year's Day heads back to the barn. Trainer Bob Baffert said, "You know, he's not a speed ball.  I said don't get caught up in the track bias.  Ride your horse, not the track.  If he gets there, he gets there.  If not, he's going to get something good out of it.  We're looking down the road. So when he turned for home in that spot back there, he did the best job he could to keep him as clean as possible, but he didn't panic early and he rode a great race.  He just bided his time and didn't get caught up in all the speed tactics.  So when he turned for home, I knew about 16th pole that this colt was going to win." 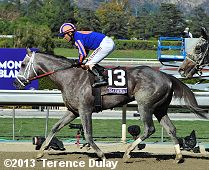 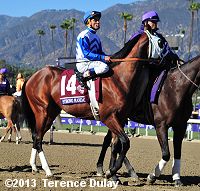 Left: Second place finisher and beaten favorite Havana returns after the race. Trainer Todd Pletcher said, "I thought he ran super. He just came up a little tired in the very last part there. But he ran very well. I thought he actually settled beautifully. I'm really happy with the way he positioned himself. Gary (Stevens) said he got a little bit lost when he made the lead turning for home. Then he just got tired the last 100 yards."

Right: Third place finisher Strong Mandate in the post parade. Jockey Joel Rosario said, "Wayne (trainer Lukas) wanted me to put him in the race, which I did, he handled everything very well today. When Havana went by him, it looked like he slowed down for a few steps, but then he picked it right up again. He ran a huge race."