The $1 million Breeders' Cup Filly and Mare Sprint (G1) features older fillies and mares sprinting 7 furlongs on the main track. Defending champion Groupie Doll was sent off as the 3-1 favorite off her third place finish in the Thoroughbred Club of America (G2) after winning the Presque Isle Masters (G2). In to challenge her included 5-1 Sweet Lulu, winner of the Test (G1) at Saratoga but second in the Cotillion (G2) at Parx, and 11-2 Dance Card, third in the Gallant Bloom (G2) after winning the Gazelle (G1) both at Belmont.

Sweet Lulu and jockey Julien Leparoux led exiting the chute through fractions of 22.19 and 44.19 while stalked by 11-1 Teddy's Promise and Groupie Doll. Entering the lane, jockey Rajiv Maragh sent Groupie Doll to the front through 3/4 in 1:08.19. 10-1 Judy the Beauty, 4th early under Luis Saez, closed late but Groupie Doll held her off by 1/2 a length in 1:20.75. It was another 1/2 length back to late-running Dance Card with Joel Rosario third. 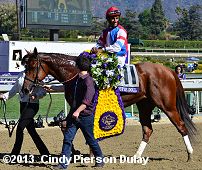 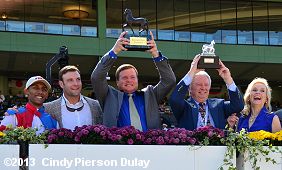 Left: Groupie Doll parades with her flowers. Trainer and co-owner Buff Bradley said, "we're very lucky to have two great partners, my father and I, happy to have them on board with us for this and share this great experience with them.  We all decided that at this time this was the best thing to do, really.  We have a lot of ?? we've got a farm full of babies that we have to take care of and keep moving forward.  And the cost of keeping a mare that value is pretty high. So we all decided that that was probably the best thing to do.  We knew it was going to be hard for us and it was a hard decision to make, and we didn't do it overnight."

Right: The trophy presentation for the Filly and Mare Sprint. Winning co-owner Brent Burns said, "Well, the great thing about this partnership is we always agree on everything.  It's very much friends first and partners second.  It's a great decision for us and for her.  I hope she's one of the great broodmares of all times. She's been great to us.  She's been terrific." 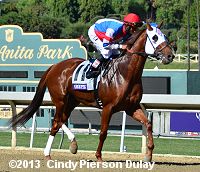 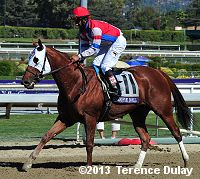 Left: Groupie Doll in the post parade. Jockey Rajiv Maragh said, "It set up just like last year. Good trip and when we got to the quarter pole, I was like ‘Whew, we're passing horses.' And I haven't even asked her yet.  She ran great."

Right: Groupie Doll returns after the race. Bradley added, "She's the best! I'm so glad she got to show that today. No one on my team ever lost confidence in her. We've always knew how good she is. The dirt and the seven furlongs were the difference today. Today was going to be emotional no matter what. This is her last race for us. I'm just so happy she's going out a winner." 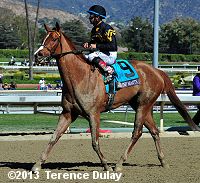 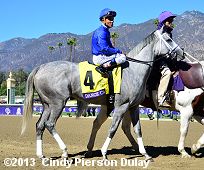 Left: Second place finisher Judy the Beauty returns after the race. Jockey Luis Saez said, "Fifteen minutes before the race, the (assistant) trainer (Blake Heap, assistant to Wesley Ward) asked me if I could ride (in place of the injured John Velazquez).  I had never been on her before. He told me to get good position.  She doesn't like to run inside but Maragh (on Groupie Doll) kept me inside. I came flying but it was too late."

Right: Third place finisher Dance Card in the post parade. Trainer Kiaran McLaughlin said, "She had to go a little bit wide, but she ran great to two very good fillies. You're never just really happy when you run third, but we lost to a true champion. A special filly won it and we're happy that we're back along with the Grade I fillies. She ran very well."