Kicking off the Championship races on Saturday was the $2 million Breeders' Cup Juvenile Fillies (G1), featuring the best 2-year-old fillies going 1 1/16 miles on the main track. Sweet Reason, winner of the Spinaway (G1) at Saratoga but second in the Frizette (G1) at Belmont, was the 3-1 favorite in the field of 10 over 7-2 Artemis Agrotera, winner of the Frizette (G1), and 9-2 Untapable, winner of the Pocahontas (G2) at Churchill Downs.

5-1 She's a Tiger and jockey Gary Stevens set an uncontested pace of 22.55, 45.31, and 1:09.30. On the far turn, Sweet Reason opened up a 4 length advantage but 32-1 Ria Antonia, 7th early under Javier Castellano, was closing well on the outside. Inside the 1/16 pole, She's a Tiger bore out and bumped Ria Antonia, and then the pair resumed their duel to the line with She's a Tiger finishing a nose in front, with late-running 11-1 Rosalind third. Due to the interference, the stewards disqualified She's a Tiger and placed her second, handing the win to Ria Antonia in 1:43.02.

Unfortunately, Secret Compass broke down at the 5/16 pole with a lateral condylar fracture with dislocation, which is not repairable, so she had to be euthanized. In addition, her jockey John Velazquez was injured in the spill and was taken to hospital to have a ruptured spleen removed. Gary Stevens, who would go on to win the Classic aboard Mucho Macho Man, was handed a three-day suspension for the bumping incident. 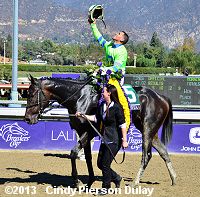 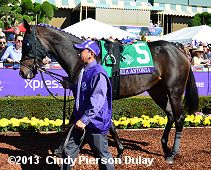 Left: Ria Antonia heads to the winner's circle. Jockey Javier Castellano said, "I had gotten by Gary (Stevens aboard She's a Tiger) but when he came in to me, he bumped me off stride."

Right: Ria Antonia in the paddock. Trainer Jeremiah Englehart, celebrating his first Breeders' Cup win said, "I don't usually root that much for my horses.  But when I saw her, I was looking at the infield TV and I saw Javier get her in a nice position to make a run down the backside and was kind of picking horses off one by one.  And I'm thinking well, she's 29-1, she'll probably fade here at some point because I was getting excited. Then when I saw he still hadn't cracked a whip yet, that's when I knew that she was going to finish." 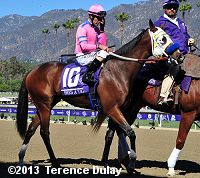 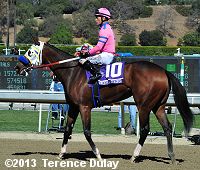 Left: Second place by disqualification She's A Tiger in the post parade.

Right: She's A Tiger returns after the race. Trainer Jeff Bonde said, "This is heartbreaking – heartbreaking.  There is nothing else I can say.  She is still a wonderful filly, but this is just heartbreaking." Jockey Gary Stevens added, "I was really disappointed for the filly. She's a great filly and probably deserved to win. It was a tough call. The stewards made their call and I wouldn't disagree with that. I wouldn't have wanted to be up there in that booth with them." 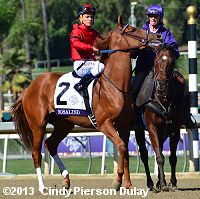 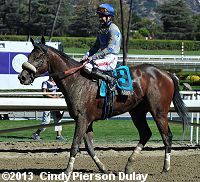 Left: Third place finisher Rosalind in the post parade. Jockey Joel Rosario said, "She ran a huge race.  We were far back early but I didn't want to take her out of what she likes to do. We had plenty of room on the inside, but I wish the race had been a little longer, like 1 1/16 miles 10 yards.  She'll be better as the distances get longer."

Right: Fourth place finisher and Beaten favorite Sweet Reason. Trainer Leah Gyarmati said, "I thought we had it there for a minute. She made a huge move at the 1/16 pole and was even from there." Jockey Alex Solis added, "At the 3/8 pole, I decided to go out.  She ran good."