The first turf event of the 2013 Championships was the $1 million Breeders' Cup Juvenile Turf (G1), a 1 mile test around 2 turns of the 7 furlong infield oval at Santa Anita. Bobby's Kitten, winner of the Pilgrim Stakes (G3) at Belmont, was sent off as the 6-5 favorite over 4-1 Giovanni Boldini, winner of the Star Appeal at Dundalk after finish second in the National (G1) at the Curragh, and 6-1 Outstrip, third in the Dewhurst (G1) at Newmarket after winning the Champagne (G1) at Doncaster. 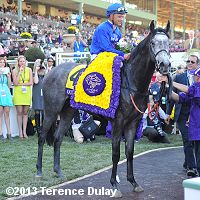 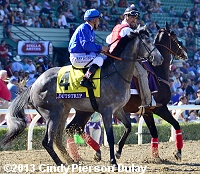 Right: Outstrip in the winner's circle. Simon Crisford of Godolphin said, "He was top rated coming into the race today, so anything less than a win we might have been scratching our heads a little bit, although obviously when you travel to California from Newmarket, it's very different set of circumstances. But we felt he belonged in the race for certain.The plan at the moment would be he would winter in Newmarket and be prepared for the QIPCO 2000 Guineas, and then all of the features sort of champion mile races throughout the European campaign, including the St. James Palace Stakes at Royal Ascot."

Left: Outstrip was a bit fractious in the post parade. 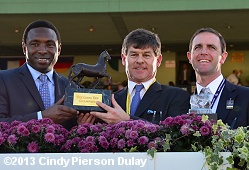 The trophy presentation for the Juvenile Turf with Simon Crisford of Godolphin (center) and trainer Charlie Appleby (right). Appleby said, "We broke a bit slower than we'd probably like to have done.  Thankfully we went a good clip early on.  When you're going down the far side, I knew we were making ground, but we had a lot of ground to make.  Once Ryan (Moore aboard Giovanni Boldini) made his move, I just thought he might have put it to bed there because it was a bold move and it was a good move. In hindsight, it wasn't a bad move for us because this horse likes to have something to run at, and Mike (Smith) said when he came down to the last furlong there, he was always confident he was going to get there.  He felt like once he got there, he could have gone away a little bit longer. But it was a great ride, and he's a brave horse." 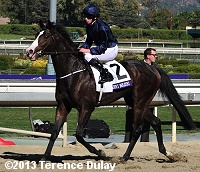 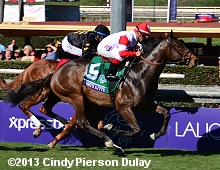 Left: Second place finisher Giovanni Boldini return after the race. Jockey Ryan Moore said, "We had a great trip. We were able to save ground.  He ran a little green. Maybe a little more experience would have helped today.  I saw (Outstrip) coming for a long way, I didn't think I had the race won after I put (Bobby's Kitten) away." Trainer Aidan O'Brien added, "He's run a great race.  I have no complaints. He was just run out of it again."