The feature race on Championship Friday is the $2 million Breeders' Cup Distaff (G1), back to its original name after a few years as the Distaff, contested at 1 1/8 miles over the main track and usually decides Champion Older Female and Champion 3-Year-Old Filly. Royal Delta, winner of the last 2 editions of this race but second in the Beldame (G1) last out, was sent off as the 7-5 favorite in the field of 6 over 5-2 second choice Princess of Sylmar, winner of four straight Grade 1 races, and 3-1 third choice Beholder, winner of last year's Juvenile Fillies and winner of the Zenyatta Stakes (G1) at Santa Anita last out.

9-1 Authenticity and jockey John Velazquez was pressed by Royal Delta with jockey Mike Smith through fractions of 22.78, 46.30, and 1:10.28. Beholder, who stalked the lead pair under Gary Stevens, took over at the top of the lane through 1 mile in 1:34.78, and drew off to win by 4 1/4 lengths in 1:47.77 over 7-1 Close Hatches. It was another 1 3/4 length back to Authenticity third, while Royal Delta faded to fourth. Beholder is the only filly to win both the Breeders' Cup Juvenile Fillies and the Distaff. 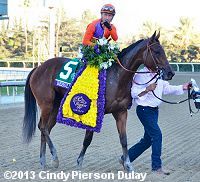 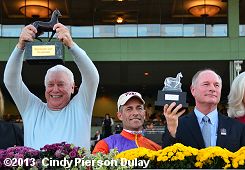 Left: Beholder circles before going into the winner's circle. Winning trainer Richard Mandella said, "she's always had natural speed.  We've never had to teach her that.  We've always tried to teach her to relax and finish. It takes a lot out of her each race.  After I had gotten through the Kentucky Oaks, it was a pretty tough day on her there.  I thought surely we could crank her up and run her a few more times in the summer and go through her with things. But I thought that the air might go out of her by the end of the year.  I've done it with a few of my other horses pointing towards the Breeders' Cup.  But I thought best to take the time off in the middle of the summer and get a couple of races to point for the Breeders' Cup." 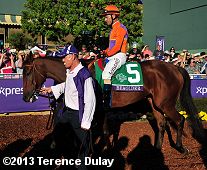 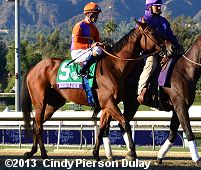 Left: Beholder in the paddock before the race.

Right: Beholder in the post parade. Winning jockey Gary Stevens said, "I actually had a smile on my face going around the first turn.  It's how every workout has been devised, and the workout two weeks ago, if anybody had seen it, it was a thing of beauty.  She's just so intelligent.  I've always said what separates the mediocre horses to the good holders to the great horses is intelligence, and she's the most intelligent animal that I've ever been around. She listens.  She doesn't always obey, but when she's in a race, she listens to what I want to do and the lessons that she's been taught.  There was never a bit of panic from her, so there was never a bit of panic from me." 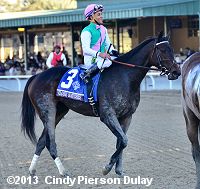 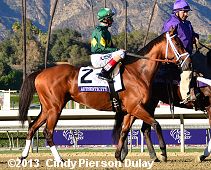 Left: Second place Close Hatches returns after the race. Her jockey Joel Rosario said, "She ran big today. She broke well and put me in the race. I was tracking (Authenticity) because it looked like she was going well. When I called on my filly at the 3/8 pole, I thought I had a good chance, but (Beholder) had another gear."

Right: Third place finisher Authenticity in the post parade. Her jockey John Velazquez said, "She ran a really good race.  It kind of changed her style of running to go to the lead, but the lead was there so we took it." 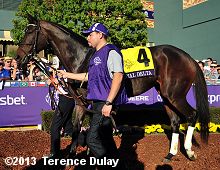 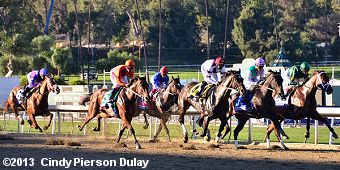 Left: Fourth place finisher and beaten favorite Royal Delta. Trainer Bill Mott said, "She's had three hard campaigns. I've been very blessed to have a lot of good horses and it's difficult to have more than two good campaigns with any horse. This mare has come back and won Grade I's this year and I see no reason why she wouldn't be champion older mare." Jockey Mike Smith added, "She didn't have it today. No spark.  Early on, I knew it. She usually takes the race to somebody, but not today.  I thought when Beholder come up to her, she would pick it up, but she didn't. I asked and I asked and nothing.  I'm kind of dumbfounded."

Right: The field for the Distaff shortly after the start.