A full field of 14 older horses went to post in the $1.5 million Xpressbet Breeders' Cup Sprint (G1), a 6 furlong trip around one turn of the main track. 2011 Breeders' Cup Juvenile Sprint winner Secret Circle, an allowance winner at Santa Anita after finishing second in the 2012 Arkansas Derby (G1) at Oaklawn, an 18-month layoff, was sent off as the 5-2 favorite in the field of 12 over 7-2 Private Zone, winner of the Vosburgh (G1) at Belmont, and 5-1 Justin Phillip, winner of the Alfred Vanderbilt (G1) at Saratoga but second in the Vosburgh last out.

Private Zone with jockey Martin Pedroza, and 20-1 Sum of the Parts under Leandro Goncalves contested the pace exiting the chute through an opening quarter of 21.34 before 9-1 Gentlemen's Bet and Javier Castellano took over at the end of the backstretch through a half of 43.72 and 5/8 in 55.97. Secret Circle, 6th early under Martin Garcia, came out 6 wide for room and rallied late to win by a neck over deep closing 16-1 Laugh Track in 1:08.73. It was another 1 1/4 lengths back to Gentlemen's Bet third. 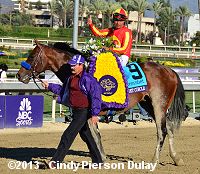 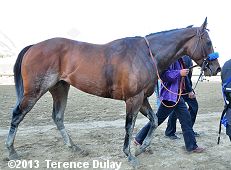 Left: Secret Circle heads to the winner's circle. Jockey Martin Garcia said, " I was having a lot of horse, and then when I went by everybody he started looking around and he was trying to like it a little bit and trying to go find other horses. I didn't have a choice (but to go wide).  There were plenty of horses in front of me."

Right: Secret Circle heads back to the barn after the race. Owner Mike Pegram said, "You need to be lucky to win these kind of races.  It's all about people and horses and I've been lucky to have people like Martin, Karl and Paul as greatest partners that you can ever have.  And what can I say about Bobby?  I mean, we've been here before.  He deserves it all, and Martin a little bit.  You did listen today. 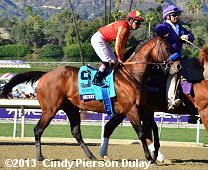 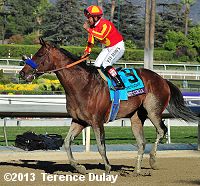 Left: Secret Circle in the post parade. Trainer Bob Baffert said, "The championships are given away in the fall, so you have to keep that in mind.  When I brought him back, I really didn't want to do a whole lot.  I wanted him on his best on his big days.  It's just like most horses.  But you just have to. You want to win the big races.  If you want to be involved in the Breeders' Cup, you've just got to really come into it in a different way, freshen them up."

Right: Martin Garcia celebrates as Secret Circle returns after the race. Garcia added, "(Baffert) told me you need to win.  If you don't win, don't come back, just keep going around!" Secret Circle is the only horse to win the Juvenile Sprint (cancelled as of this year) and come back to win the Sprint. 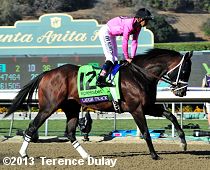 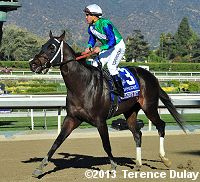 Left: Second place finisher Laugh Track in the post parade. Trainer Mark Casse said, "This is the story of my Breeders' Cups. You can't ever be unhappy when a horse runs the kind of race he ran. They run the Filly and Mare Sprint at 7/8, gee, I wish they ran this race at 7/8. He ran a great race."

Right: Third place finisher Gentlemen's Bet returns after the race. Jockey Javier Castellano said, "He ran a great race today. He was running very smoothly down the backside. When the hole opened on the rail (inside Sum of the Parts), we went on because I didn't want to take a chance of getting trapped inside by tiring horses. When we got to the 1/4-pole, I still had a lot of horse and I thought I was going to win, but those other two horses just flew on by me. I was pleased with him."