Day two of the 30th Breeders' Cup World Championships took place Saturday at Santa Anita Park before a crowd of 58,795 enjoying clear skies and temperatures in the low 80's with a light wind late in the card. The main track was fast and the turf firm as is typical during the autumn meeting at the historic Arcadia oval.

The $5 million Breeders' Cup Classic (G1) is the richest race in North America, featuring top older horses going 1 1/4 miles on the main track, in a race that often decides Champion Older Horse, Champion 3-Year-Old Male, and/or Horse of the Year. Pacific Classic (G1) and Hollywood Gold Cup (G1) winner Game On Dude was sent off as the 9-5 favorite in the field of 11 over 4-1 Mucho Macho Man, winner of the Awesome Again (G1), and 6-1 Declaration of War, winner of the Juddmonte International (G1) at York. Defending champion Fort Larned was dismissed at 10-1 off his win in the Homecoming Classic at Churchill Downs. 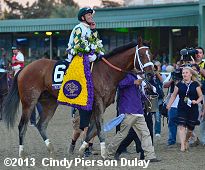 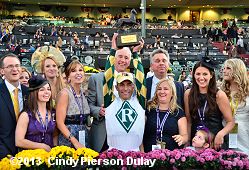 Left: Trainer Kathy Ritvo (far right) rushes to Mucho Macho Man after winning the Classic. Ritvo, the first female trainer to win the Classic, said, "I was just hoping he got it.  When I saw Gary shake his stick, I was confident.  He ran a fantastic race."

Right: The trophy presentation for the Classic. Winning owner Dean Reeves (beneath the trophy) said, "That's what really makes this so special.  He is a fan favorite.  He's just a neat horse.  He is easy to love, and he gives you everything he's got every time out.  Gary rode just a phenomenal race.  He knew what he was doing out there.  And Kathy and Finn have worked on this all year long to come back and make up a half a length, and they did it today, and it's just pretty special."Ritvo added, "He's been a pleasure to get up and see in the barn in the morning.  I love this horse.  He's fantastic.  He gives us a hundred percent.  He's a happy horse, intelligent.  I'm just very blessed to be here.  Very blessed to have met him.  Very blessed to have my team, Finn, my assistant, the groom, the exercise rider, his hotwalker." 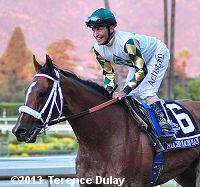 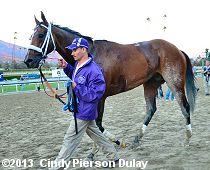 Right: Mucho Macho Man heads back to the barn after the race. Trainer Kathy Ritvo said, "He's been a pleasure to get up and see in the barn in the morning.  I love this horse.  He's fantastic.  He gives us a hundred percent.  He's a happy horse, intelligent.  I'm just very blessed to be here.  Very blessed to have met him.  Very blessed to have my team, Finn, my assistant, the groom, the exercise rider, his hotwalker." 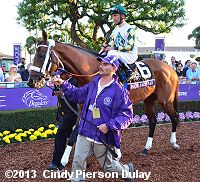 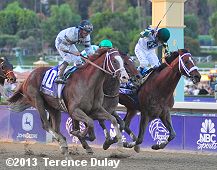 Right: Gary Stevens celebrates aboard Mucho Macho Man just past the finish. Jockey Gary Stevens, celebrating his first Classic win, said, "I'm new to the team.  It's only been two races, but I feel like I've been here with him from the word go.  It's actually the culmination of a career.  I had never won a Breeders' Cup Classic.  I'd been so close so many times and I figured it just wasn't meant to be. It's sweet to go all these years and not have won it, and then take seven years off and come back with a horse like this for these people." 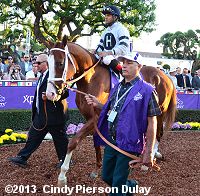 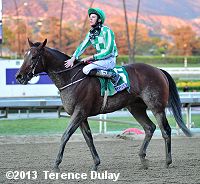 Left: Second place finisher Will Take Charge in the paddock. Jockey Luis Saez said, "We had a good trip. Every time I ride this horse he's always very steady early in the race, when you turn for home, he's a totally different horse. In the stretch, the 8 horse (Palace Malice) drifted out a bit and that forced me even wider and yes, it probably cost me the race."

Right: Third place finisher Declaration of War returns after the race. Trainer Aidan O'Brien said, "He ran a great race. He fought all the way to the wire. He was always going nicely and held his position well.  I couldn't believe how well he was going. I would like to thank my team for letting me run him here. It's a privilege to be here… and to be able to bring good horses here. Joseph (O'Brien) did everything right on the horse." 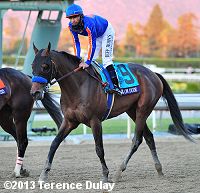 Left: Beaten favorite Game On Dude returns after the race. Jockey Mike Smith said, "The pace was real fast. I didn't know what else to do. Do I take back or not? He's a free-running horse and I already have a pretty good hold on him. I tried to ease out and see if he'd drop in a little on me and he was on it. The crowd was screaming and he was on it then. Gary (Stevens on winner Mucho Macho Man) was right there too. He was in front of us a little while and then he eased back and when he did that, he knew it was the winning move. He was right there and I thought, 'Wow, he's taking it to me quick.' He (Gary) did a great job. The point I knew my horse wasn't going to get it was on the backside when Gary came to me, I squeezed him a little to put some distance between us and I couldn't. I knew I was in trouble right then."

Right: First time by with Game On Dude vying for the lead and Declaration of War, Mucho Macho Man, and Will Take Charge behind him.