The $2 million John Deere Breeders' Cup Turf brought out a competitive field of nine to contest the longest race of the afternoon, 1 1/2 miles around three turns of Santa Anita's very firm turf course. Defending champion High Chaparral was back, sent off at 5-1, while Storming Home was the lukewarm 2-1 choice.

When the gate opened, 24-1 outsider Balto Star went straight for the front while 14-1 shot The Tin Man prompted the pace to his outside. Balto Star kept the pace honest, with fractions of 25.12, 48.73, 1:11.42, and 1:35.76. But the brisk pace took its toll and Balto Star was done with still a half mile left to go. The Tin Man inherited the lead at the top of the stretch, getting 1 1/4 miles in 2:00.04, which set the race up perfectly for the closers. Down the lane, 7-2 shot Falbrav, who stalked back in 4th early, came on and got the lead a furlong out, while High Chaparral and 14-1 shot Johar closed with every stride. High Chaparral, Johar, and Falbrav hit the wire together in a time of 2:24.24. After a lengthy delay as the judges examined the photo, the first dead heat for win in Breeders' Cup history was announced. High Chaparral and Johar tied for the win, and it was a head back to Falbrav. Favored Storming Home took a wide trip and had nothing left at the end, finishing seventh. 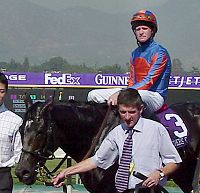 Mick Kinane on High Chaparral circle and wait for the stewards decision. Kinane said, "There was more pace than I expected. When I asked him he responded. I'm very happy with the result." 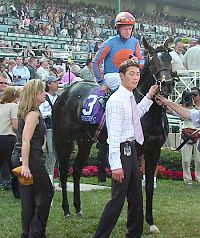 After the dead heat was declared, High Chaparral was first in the winner's circle. He became the first repeat winner in the Turf. His trainer Aidan O'Brien said, "We were delighted to be involved [in the dead heat]. Obviously he's an exceptional colt. He was a little tight down the backside but he came home real well." 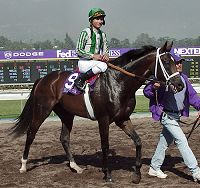 Johar was second to enter the winner's circle. His jockey Alex Solis said, "This is incredible. I got him into the race, and at the quarter pole I swung him out and he came flying. He's a game little horse and he beat some of the best horses in the world. I'm very proud of him." 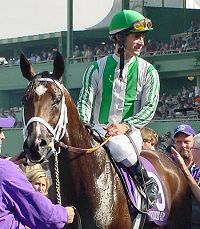 Johar and Solis pose for their win photo. Richard Mandella, trainer of co-winner Johar, said after the dead heat was declared, "I'm having a very good day. Johar ran fabulous." 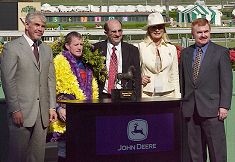 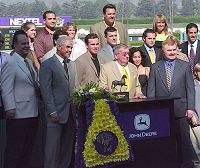 And then again to Johar's connections. 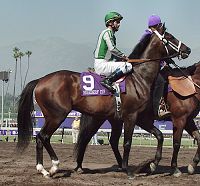 Co-winner Johar in the post parade with Alex Solis up. Johar was one of the best looking horses all week during the workouts. 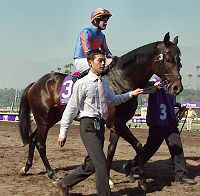 Co-winner High Chaparral in the post parade with Mick Kinane up. 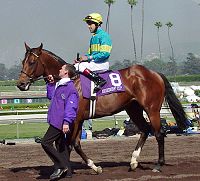 Third place finisher Falbrav in the post parade. His jockey Darryll Holland said, "He just exploded turning into the stretch and I thought we were going to roll to the finish. He's a brave horse but I could feel him tiring on me the last 20 yards." Trainer Luca Cumani added, "He ran a fantastic race for a horse that doesn't get 1 1/2 miles. He was the winner all the way except the last 50 yards. I'm very proud of him." 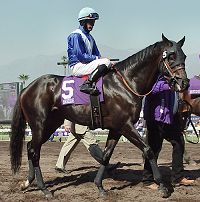 Beaten favorite Storming Home, who finished 7th, in the post parade. His jockey Gary Stevens said, "We had a smooth trip other than getting bumped around early on. He just flattened out on me, I don't know why."