In the NetJets Breeders' Cup Mile, a full field of 14 was entered, including 3-1 lukewarm favorite Peace Rules, a veteran of the Triple Crown trail being switched back to turf, and three-year-old French filly Six Perfections taking on males at odds of 5-1.

As the field loaded into the gate, Six Perfections acted up and jockey Jerry Bailey had to dismount briefly. When the proceedings got underway, as expected Peace Rules was sharpest out of the gate and led the pack through the first half mile through fractions of 22.28 and 45.40, with 5-1 shot Designed for Luck and 22-1 outsider Soaring Free close behind. Peace Rules was done after five furlongs and dropped back, as Designed for Luck inherited the lead, getting 3/4 in 1:09.41. Turning for home, Jerry Bailey aboard Six Perfections got the filly into gear and she rallied strongly between rivals, outfinishing the late runs of 12-1 shot Touch of the Blues and 39-1 outsider Century City. The margin of victory was 3/4 length over Touch of the Blues, in 1:21.86 for the mile on firm turf. It was a neck back to Century City in third. 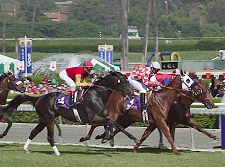 First time by with Peace Rules, Designed for Luck, and Soaring Free vying for the lead. 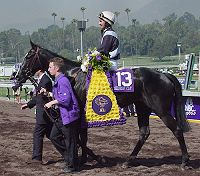 Six Perfections circles with her flowers after winning the Mile. Winning jockey Jerry Bailey said, "I told them she might be fractious going into the gate but it wasn't an issue once the race started. She saved ground going into the first turn even with the post (13) we had. She has a great turn of foot and put in an exceptional performance." 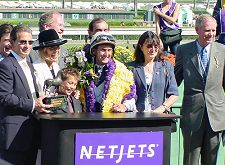 The trophy presentation. Winning trainer Pascal Bary said, "She is so good at one mile. I was a bit worried in the first turn, but with the draw, [Jerry Bailey] figured to be behind. But when he found his way, she was gone." 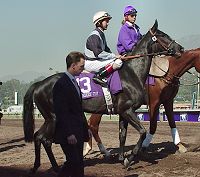 Six Perfections in the post parade. Alan Cooper, racing manager for winning owners the Niarchos family, said, "She acted up before the Irish 1000 Guineas as well. That powerful finishing kick is her strength." 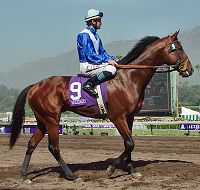 Second place finisher Touch of the Blues in the post parade with Kent Desormeaux up. Desormeaux said, "There was plenty of speed to run at. When I hooked [Six Perfections] I actually got a half length in front. This horse has beaten everybody and is one of the best grass milers. We threw them our best bullet." Trainer Neil Drysdale added, "I'm thrilled that he was able to finish the year with this nice finish. He's been an unlucky horse in his career and today he ran great." 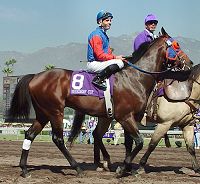 Third place finisher Century City in the post parade with Jose Valdivia up. Valdivia said, "[Trainer] Beau Greeley had this horse ready to roll and he showed it today. We got squeezed a little bit around the turn but for the most part I had a good trip." 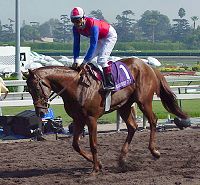 Beaten favorite and last place finisher Peace Rules returns after the race. His jockey Edgar Prado said, "He had the rail and that hurt us. They pressured us the whole way. He never got a breather."