In the Breeders' Cup Sprint, a field of 13 entered the gate to contest the six furlong distance around one turn at Santa Anita. Sent off as the 2-1 favorite is Aldebaran, despite the fact he had never run six furlongs in his career.

As expected the pace pressure was very fast indeed. 28-1 outsider Zavata was quickest out of the gate and he got the first quarter in 21.02 seconds, with 7-2 second choice Shake You Down in hot pursuit. At the quarter pole, 23-1 longshot Cajun Beat made his run to challenge for the lead, got it, ran the half in 43.32, and then drew a clear advantage down the lane to win by 2 1/4 lengths over late-running 14-1 shot Bluesthestandard. The final time was 1:07.95, just 0.18 seconds off the stakes record set by Kona Gold in 2000. It was another 2 lengths back to Shake You Down in third. Favorite Aldebaran finished sixth in what may be the final career start before retiring to stud. 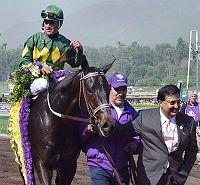 Owner Satish Sanan of Padua Stable leads his Breeders' Cup Sprint winner to the winner's circle. Sanan said, "I think this horse was not given a lot of credit earlier on. As I said earlier, ever since it's moved to Steve the horse has improved a lot. New connections, new trainer, new jock, it's just tremendous." 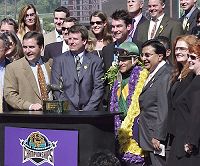 The trophy presentation with celebrity guest Jerry O'Connell. Winning trainer Steve Margolis said, "We took a big gamble coming here but he had been training so good, and his last race he ran such a big Beyer (Speed Figure) number. He showed his abilities today. He can lay where he was today and make the lead. He is versatile." 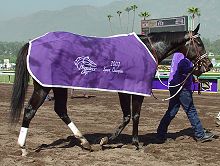 Cajun Beat being led back to the barn in his winner's blanket. 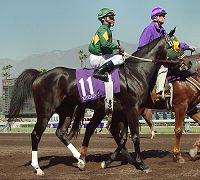 Cajun Beat in the post parade. Winning jockey Cornelio Velasquez said, "I knew I had a lot of horse. He closes easy. He got a little brave." 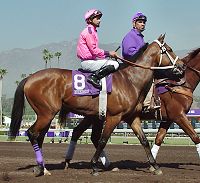 Second place finisher Bluesthestandard in the post parade with Mike Smith up. Smith said, "He ran dynamite. We initially wanted to be on the pace, but everybody was going so fast out of the gate, I was trying to stay with them and sometimes a horse gets discouraged when you do that. I just put my hands down and after slipping and sliding a little, he was fine. Anywhere I pointed him, he went and we would up getting through the hole." 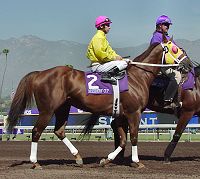 Third place finisher Shake You Down in the post parade with Mike Luzzi up. His trainer Scott Lake said, "This horse always shows up. He broke a little slow today, and Mike [Luzzi, jockey] had to hustle him up. They were going at it pretty good, and he ran a good race to be third. We'll go back home tomorrow." 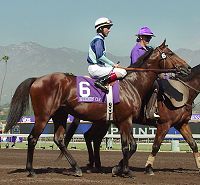 Beaten favorite and 6th place finisher Aldebaran in the post parade. His jockey Jerry Bailey said, "I had to alter course slightly turning for home, but it was for the better, because I could save some ground. He was flying. A sixteenth past the wire, we were by all of them. We got a good pace on a speed-favoring track."