In the Juvenile Fillies, Halfbridled was expected to be the odds-on favorite but having drawn the outside post number 14, she was sent off at only 2-1. However, Julie Krone spoke confidently all week about her chances in the race and she lived up to expectations.

Krone kept the 2-1 favorite out in the four path down the backstretch, relaxed in midpack, while 7-1 shot Forest Music set early fractions of 22.88 and 46.82. 8-1 shot Victory U.S.A. stalked Forest Music and inherited the lead briefly, going 6 furlongs in 1:10.84. By this point, Halfbridled was getting into gear. Turning for home, Krone asked Halfbridled for her run and got it as the favorite accelerated to the front, opening a clear advantage inside the 1/8 pole and won going away by 2 1/2 lengths over 13-1 outsider Ashado in 1:42.75 for 1 1/16 miles. It was another neck back to Victory U.S.A. in third. 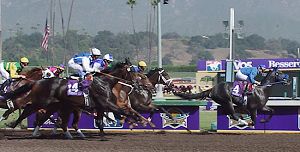 First time by with Forest Music out front and Halfbridled five lanes outside in the second flight. 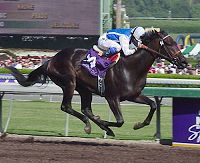 Halfbridled seems to float above the track as she is in full flight for the wire. Winning trainer Richard Mandella said, "Julie [Krone] did a great job of finessing her around the turn. That's why she's in the Hall of Fame/ She was ready to go on the backstretch and all Julie had to do was move her hands a little bit and she would have taken off. But Julie stayed patient and that takes real cool. I could see that when she finally asked her she had a lot of confidence. It was just a great ride." 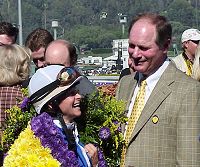 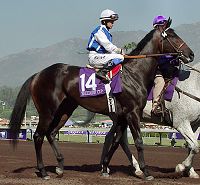 Halfbridled in the post parade. Winning jockey Julie Krone said, "This [filly] was so great. I can't say enough about her. I did more pulling than pushing on her. She's just phenomenal." 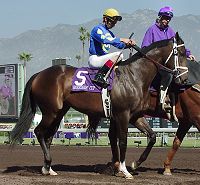 Second place finisher Ashado in the post parade with John Velazquez up. Velazquez said, "We were right behind Halfbridled and around the quarter pole I came up alongside her and I thought I had a chance. But she had a bit more today. My filly has a future. I think today was more the winner having more but my filly will go on." 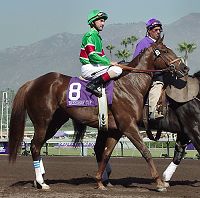 Third place finisher Victory U.S.A. in the post parade with Jerry Bailey up. Her trainer Bob Baffert said, "She chased a ridiculously fast pace. I was worried about all the speed in there but what are going to do? She hung in there pretty good." Jockey Jerry Bailey added, "My horse just wasn't ready. It was time for Halfbridled, not me."