Twelve juveniles faced the starter and a 1 1/16 mile tour of Santa Anita to settle the issue, with Cuvee sent off as the overwhelming 8-5 favorite. Unfortunately several top contenders opted to pass this race out of fear of the Breeders' Cup Derby jinx, so year end honors may still be up in the air.

42-1 longshot Mambo Train went right to the front under Edgar Prado, and he set the early pace of 22.31 and 45.17 as Chapel Royal and Race for Glory stalked in behind him. But the brisk pace took its toll and Mambo Train gave way after 5 furlongs, allowing Chapel Royal to inherit the lead and continue with 3/4 in 1:09.80. Chapel Royal held the lead till the 1/8 pole, but 27-1 outsider Action This Day, who trailed the field far back early on, launched his rally on the turn, and then blew right by everybody down the straight to win going away by 2 1/4 over another closer, stablemate Minister Eric. It was a whopping 5 lengths back to Chapel Royal in third. The final time was 1:42.62. 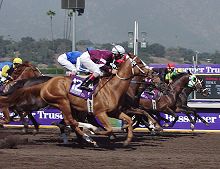 First time by and it is six across the track with favorite Cuvee on the far outside. 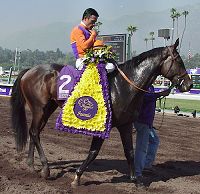 Action This Day on the way to the winner's circle. Winning jockey David Flores said, "He's such a great horse. He breaks a little slow so I just let him come out of the gate. At the three-eighths pole, he started picking up horses and I was just hoping no one got in my way. It just worked out perfect. It was a great trip." 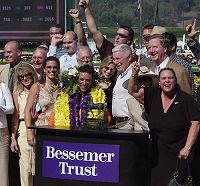 The happy connections celebrate in the winner's circle. Trainer Richard Mandella, whose entrants Action This Day and Minister Eric finished 1-2 in the event, said, "They both ran their hearts out. Minister Eric ran a great race. The winner had the right style because of the hot pace. Like I said all week, he's the man. He was the 'ugly duckling' this spring and now he is the 'swan.'" 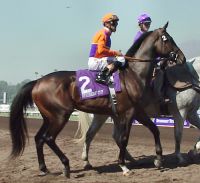 Action This Day in the post parade with David Flores up. 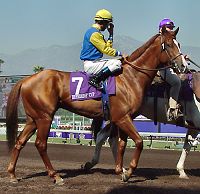 Second place finisher Minister Eric in the post parade with Alex Solis up. Solis said, "Around the 5/16 pole, I thought I had it won. I got to the lead at the top of the stretch and I saw the other horse coming. Then, I saw it was Action This Day, the stablemate. I'm happy for the barn. It's a team effort. In fact, I took off the winner to ride this one. I think my horse has a future. He's going to keep improving." 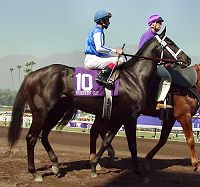 Third place finisher Chapel Royal in the post parade with John Velazquez up. His trainer Todd Pletcher said, "[The starters] grabbed his ear at the start; I don't know why they have to do that. He got off a little slow, but he got into the race and he ran a big race." 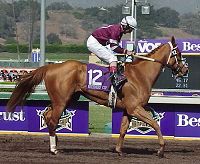 Beaten favorite Cuvee is eased across the finish line. His trainer Steve Asmussen said, "Four-wide on the first turn, pushing a half in 45 3/5, it's not where you want to be. But it happens, and its over." Jockey Jerry Bailey added, " I went out there, I thought I could get the lead and I wound up biting the bullet and getting four-wide. But it didn't matter, by the half-mile pole, he was spent."