The Filly and Mare Turf brought out the best female turf runners in the world, and with the result, may have put to rest the idea that Europeans cannot compete fairly when the World Thoroughbred Championships are held in Southern California. Despite the hot dry air, smoke from the nearby fires, smog, and the very dry firm turf course, Europe-based runners swept the top three places and Europe-bred runners swept the top five. Notably, all three were out on the course working every day this week to get acclimated.

American hope and 16-1 shot Bien Nicole was first out of the gate breaking from the far outside, and led the field for the first mile through brisk fractions of 23.82, 46.73, 1:10.52, and 1:35.31, as 47-1 outsider L'Ancresse stalked the pace to her outside. Turning for home, Bien Nicole was done and fell out of contention as the closers all made their moves. Closing from midpack was 3-1 favorite Islington, who was sixth early, charged for the lead on the turn, gained a short lead over L'Ancresse inside the 1/8 pole and prevailed in the final strides by a neck, in 1:59.13 for the 1 1/4 mile distance. It was 2 1/2 length back to the very late closing Yesterday, and just a scant nose back from her to Heat Haze in fourth. 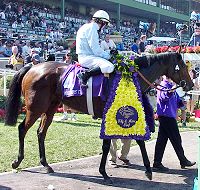 Islington in the winner's circle. Winning jockey Kieren Fallon said, "She got hot and so did I. It got to both of us. I thought that Aidan O'Brien's filly [Yesterday] was going to tire but she kept pressing on. Things happened for me in here. It was such a great run." 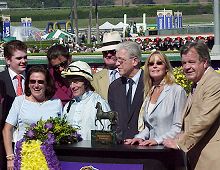 The trophy presentation with celebrity guest Bo Derek. Winning trainer Sir Michael Stoute said, "I was always happy with her position. As soon as we straightened out for him I knew she would win. She is a wonderful filly, there are not many better." 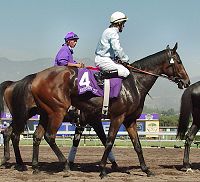 Islington in the post parade with Kieren Fallon up. 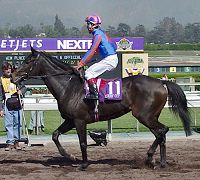 Second place finisher L'Ancresse returns after the race. Her jockey Edgar Prado said, "The heat didn't seem to bother her. She was nice and relaxed. We had a nice clear run chasing the horse in front, then the favorite came up on us slowly gaining on me. We had a good stretch duel but just got beat by a better filly." 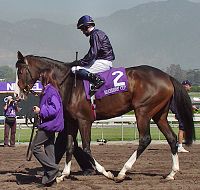 Third place finisher Yesterday in the post parade with Mick Kinane up. Kinane said, "Islington had first run on me, but I had a great position turning for home. Then she started to fade a bit on me. I also think the ground was a touch quicker than she would have liked."