In the $4 million Grade 1 Breeders' Cup Classic - Powered by Dodge, ten horses faced the starter in hopes of possibly stealing Horse of the Year honors from current leader Mineshaft, who retired and was unable to make the race. Sent off as the 5-2 favorite was Medaglia d'Oro, trained by Bobby Frankel who so far had been shut out on the day. Also in the field were defending champion Volponi, dismissed at 17-1, Derby and Preakness winner Funny Cide at 9-1, and Perfect Drift at 4-1.

When the gate opened, Medaglia d'Oro was sent to the lead by jockey Jerry Bailey, and he went the first quarter in 22.79 and the half if 46.35, with 6-1 shot Congaree in hot pursuit. Congaree inherited the lead midway down the backstretch, and he continued the quick pace with fractions of 1:10.32 and 1:34.32. Turning for home, the two continued to battle. Inside the 1/8 pole Congaree slowed to his 4th place finish. Medaglia d'Oro got to the front briefly but Pleasantly Perfect, a 14-1 outsider who trailed in 8th early, reached contention on the turn, came out wide at the top of the stretch, and wore down Medaglia d'Oro in the final 1/16 to prevail by 1 1/2 lengths in a final time of 1:59.58 for the 1 1/4 miles. It was another 3/4 length back to 15-1 shot Dynever in third. Funny Cide was 9th and Volponi showed his best days are over, finishing last. 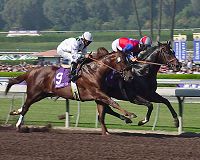 First time by and Congaree and Medaglia d'Oro were two lengths clear of the rest of the field. Patrick Valenzuela, aboard pacesetter and fourth place finisher Congaree, said, "He ran a great race, he tried hard. He could never pull away from Medaglia d'Oro because he kept pressing me. My horse paid for it." 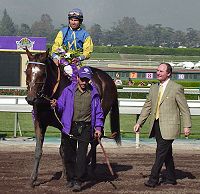 Richard Mandella is all smiles after winning his fourth Breeders' Cup race of the day. Mandella said, "These old horses have done everything and been everywhere. My horses just needed to get his race under him. We thought he was good enough last year for those and we didn't get a chance to prove it. And we have now." 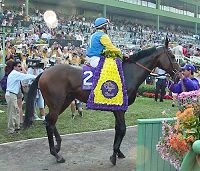 Pleasantly Perfect and Alex Solis enter the winner's circle. Solis said, "The whole way out he had a good trip. I knew he was coming so strong, and I know when you really ask him down the stretch he was going to give it to me today, a big kick like he always does. I put my whip to him on the left side and he just blew by those two horses [Medaglia d'Oro and Congaree]". 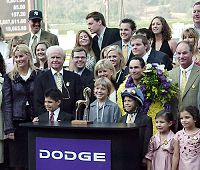 The happy connections at the trophy presentation. Winning owner Jerry Ford said, "We really are thrilled with the race and thrilled with racing. I would anticipate we would keep running until we're ready to put him out." Alex Solis added, "Too many horses retired this year." 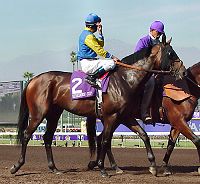 Pleasantly Perfect in the post parade. He was set to go to the Classic las year and was not allowed to compete because of the medication rules at Arlington. When Mandella was asked about this he said, "I never had frustration over the rule in Chicago. Rules are rules, and I don't have any problem with them. Again, I'll say that rules should be uniform from state to state so that people don't get mixed up or do the wrong thing when they travel, because nowadays travel's a big part of racing." 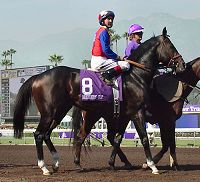 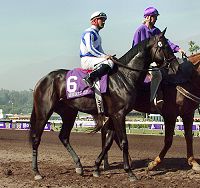 Third place finisher Dynever in the post parade. His trainer Christophe Clement said "I've said all along this is a great horse. He's just been unlucky. He handled this, the shipping, the heat, everything, and got beat by two older horses. We'll put him away for the year and bring him back next year."