A field of seven faced the starter in the $2 million Breeders' Cup Distaff - Presented by Nextel. With expected favorite Azeri scratching from the race on Monday, Sightseek earned favoritism and was sent off at 3-5. Got Koko, who defeated Azeri last time out, was the 4-1 second choice. 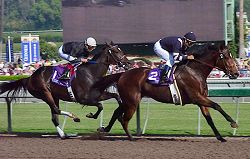 First time by and Adoration is in front enroute to a wire-to-wire victory. 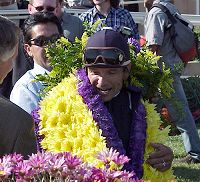 Winning jockey Patrick Valenzuela with the flower wreath. He said, "We weren't surprised. She had run a great race against Elloluv, Got Koko, and Azeri [in the Lady's Secret], and only got beat 3 lengths and I had to check pretty hard. We took advantage of her getting out on the front." 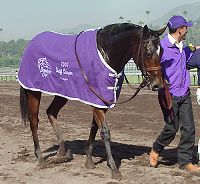 Adoration returns to the barn in her winner's blanket. Winning trainer David Hofmans said, "The plan was to go to the front all along. When I saw the makeup of this race I told Pat [Valenzuela] to come out riding hard if everyone gave you a length [clear]. I know she loves this racetrack." Assistant Grant Hofmans added, "I knew if she got a half in 47 it's over. It was over." 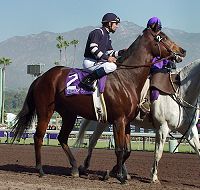 Adoration in the post parade with Pat Valenzuela up. 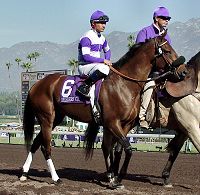 Second place finisher Elloluv in the post parade with Corey Nakatani up. Her trainer Craig Dollase said, "It was a giant race, a winning race. She sat up close and finished. It was a big run for our filly and we'll be back next year. Hats off to Hofmans and his crew." Jockey Corey Nakatani added, "She is a 3-year-old and she will get better. I definitely think she is a 3-year-old [filly] champion, no doubt." 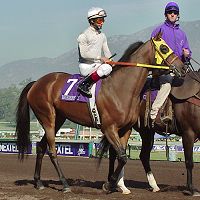 Third place finisher Got Koko in the post parade. Her jockey Alex Solis said, "I had a good trip. I thought there would be more pace. On paper it looked like there would be." Trainer Bruce Headley added, "She ran great, just didn't win. Nobody went out with the speed. We'll be back next year." 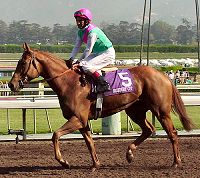 Beaten favorite and fourth place finisher Sightseek returns after the race. Her jockey Jerry Bailey said, "She broke well today but got pushed behind a wall of horses going into the first turn, although that's where I wanted to be. I sensed the slow pace and that's when I pulled her out on the backside, but I didn't have any horse. I never had a confident feeling."