Kicking off the Cathay Pacific Hong Kong International Races for 2011 was the HK$14 million (US$1.8 million) Cathay Pacific Hong Kong Vase (G1), a 2400 meter (about 1 1/2 mile) trip for older horses over the right-handed turf course at Sha Tin. Campanalogist was sent off as the 3-1 favorite in the field of 13, exiting wins in the Preis von Europa (G1) and Gran Premio del Jockey Club (G1). In to challenge him included 4-1 second choice Silver Pond, a distant 8th in the Prix de l'Arc de Triomphe (G1) after finishing second in the Grand Prix de Deauville (G2), and 9-2 third choice Vadamar, winner of the Prix du Conseil de Paris (G2) last out. 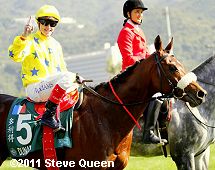 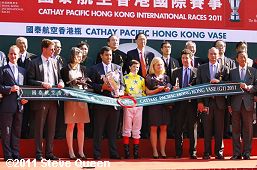 Left: Dunaden heads to the winner's circle. Trainer Mikel Delzangles said, "I still can't believe it. If you told me in May that I would be here in December I would not believe you. He's got a great temperament and travels so well. He's happy wherever he is. He deserves a holiday now and I'm going to enjoy this before making plans."

Right: The trophy presentation for the Hong Kong Vase. 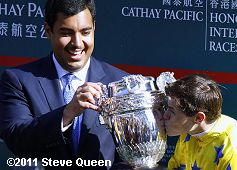 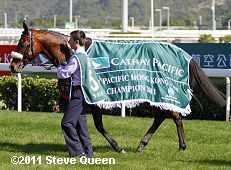 Left: Owner Sheikh Fahad Al-Thani holds the trophy while jockey Craig Williams kisses it. Williams said, "I couldn't have been happier with him since I sat on him earlier in the week. I've been looking forward to today. We decided to have him up as close as we could, and he produced so much when I pulled him out, the hairs were standing on the back of my neck some way before the line. I really love this horse and the way he fights. He tried to put me on the floor on Tuesday and I knew he was in great form."

Right: Dunaden heads back to the barn after the race. 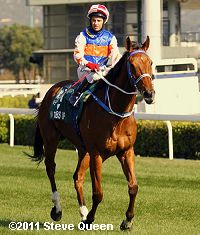 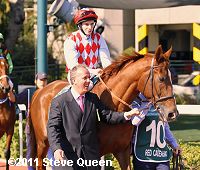 Left: Second place finisher Thumbs Up returns after the race. Jockey Brett Prebble said, "He probably had his chance, but ideally we needed something to cart him into the race. We were left in front a touch soon. He has gone from a mile, to 2000m to this and just didn't have the miles in his legs. Caspar (Fownes, trainer) has done the best he can but there's just not the races for him. The horse has given me an awesome feel in three runs this preparation , we'll win a big one with him."

Right: Third place finisher in a dead heat Red Cadeaux heads out to the track before the race. Jockey Ryan Moore said, "He ran a blinder. He had a beautiful run and finished it off even though the ground might have been a bit quick for him." Trainer Ed Dunlop added, "He was coming to win, but in the last 50 yards the ground was to too firm for him." 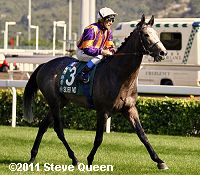 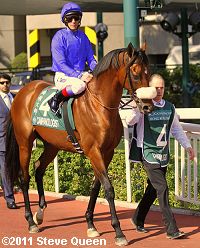 Left: Third place finisher in a dead heat Silver Pond returns after the race. Jockey Thierry Jarnet said, "The horse ran great, and we could have finished closer, had we not been so unlucky in the straight. He was checked before I was able to find a gap. He showed he's right up there with these good international horses."

Right: Fifth place finisher and beaten favorite Campanalogist heads out to the track before the race. Jockey Frankie Dettori said, "He's a little bit away from being absolutely top class, I was surprised they made him favourite. He gave me his best but that's probably as good as he is."