The shortest of the International Races at Sha Tin is the HK$14 million (US$1.8 million) Cathay Pacific Hong Kong Sprint (G1) at 1200 meters, the richest 6 furlong turf sprint in the world, and the final leg of the Global Sprint Challenge. Little Bridge was sent off as the 9-5 favorite in the full field of 14, off his win in the Jockey Club Sprint (G2), the major local prep for this race. In to challenge him included 3-1 second choice Lucky Nine, fifth in the Sprinters Stakes (G1) at Nakayama last out, and 5-1 third choice Entrapment, second in the Jockey Club Sprint after finishing a close third in the Premier Bowl (G2).

Jockey Katsumi Ando sent 53-1 Pas de Trois to the lead immediately along the rail and set fractions of 23.61 and 45.94 over the good-to-firm turf while pressed by 106-1 Bated Breath and 7-1 fourth choice Rocket Man. With 3/16 mile to go, Pas de Trois tired to eventually finish last, allowing Entrapment to inherit the lead. Lucky Nine, who raced in midpack early, closed in the final furlong to win by a head in 1:08.98. Entrapment held on for second, in a dead-heat with late-running 81-1 longshot Joy and Fun, while favorite Little Bridge was another 1 3/4 lengths back in fourth. 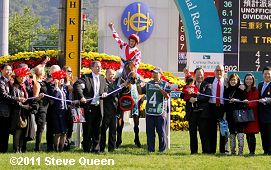 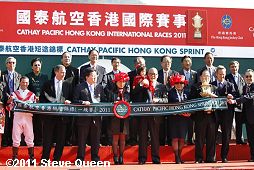 Left: Lucky Nine in the winner's circle. Jockey Brett Prebble said, "There was always going to be speed with Rocket Man drawn wide. He missed the kick slightly and I was on the back foot from the start. I got to them at the 200m and I hadn't pushed him yet. I knew I'd had a tough trip and had to save everything I had. When I did press him, he gave me a half-neck and kept the momentum to the line. This horse is all heart and 100% credit to Caspar, he couldn't have had him any better - it's a big factor. He has the stamina to go further but this horse never shirks a challenge." 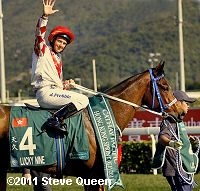 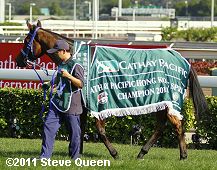 Left: Lucky Nine's parades for the fans. Trainer Caspar Fownes said, "In Japan, we were so close first-up and then nearly got put over the rail. After he came back from Japan in October we were really struggling. His coat had gone and he wasn't himself. Luckily we turned his around and it helps that he stays further as he had to come wide to challenge. He's versatile and I can stretch him to a mile so Dubai is certainly an option now. This is huge for us, we wait all year for this meeting."

Right: Lucky Nine heads back to the barn after the race. 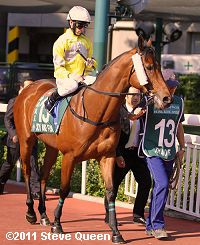 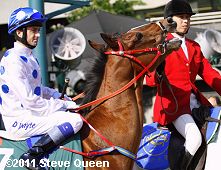 Left: Second place finisher in a dead heat Joy and Fun heads out to the track before the race. Jockey Brett Doyle said, "Every chance in the run, and he's run out of his skin. Just a super effort."

Right: Second place finisher in a dead heat Entrapment heads out to the track. Jockey Douglas Whyte said, "If I rode the race five times over I'd ride the same race. A better horse beat me on the day, I dropped the winner at the top of the straight and he's come back and got me. He ran his heart out." 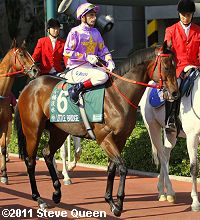 Fourth place finisher and beaten favorite Little Bridge heads out to the track before the race. His jockey Gerald Mosse said, "He didn't have enough room in the straight, but he was a bit timid, a bit shy."