American Pharoah was a stand out in all his races and went on to sweep the 2015 Triple Crown, the first horse to do this since 1978, then things went back to normal with three different horses winning the Triple Crown races both in 2016 and 2017. Then three years ago Justify broke all the rules by not only winning the Derby without racing as a juvenile, but completing the Triple Crown sweep before retiring after only six starts. Once again we will handicap the Preakness field using angles that have pointed at the winner in past years. It is well known that to win the Preakness, you have to have raced in the Kentucky Derby, and if the Derby is not in the horse's past performances he is almost an immediate toss for the win. However, despite a possibility Derby winner Medina Spirit will be disqualified (the second horse after Dancer's Image to be taken down due to a drug positive, and only the third DQ ever, after Maximum Security), Derby second place finisher Mandaloun is not here, possibly missing out on a Triple Crown. Although Pimlico is often called a speed-favoring oval, in recent years it tends to favor stalkers so we want a horse that stays close to the pace but not setting it. The track is being completely rebuilt for the 2022 running, so the new configuration may favor a different running style.

We also recommend checking workout patterns in the final week since these are a good indicator of who is ready. Not having a work between the Derby and the Preakness used to be a negative, but winners such as Justify, Exaggerator, American Pharoah, California Chrome, I'll Have Another, Shackleford, and Lookin at Lucky did not have a timed work during the 2 week layoff. But note again that all of them came out of the Derby, so with that short layoff a timed work may be unnecessary. Horses who skipped the Derby definitely need a timed work.

Where there is a tie in points we will use their morning line odds as the tie-breaker. You can view free past performances here from BrisNet.com (look for Medina Spirit). 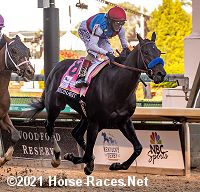 Medina Spirit as expected tops the list as the Kentucky Derby winner, but unlike past top horses, he did not meet all our requirements so he cannot be considered a lock, and at low odds could be a considered a poor value proposition. Obviously he is coming off the correct prep race within the correct layoff range, a stakes win at 3, and it was a sharp effort. He earned a 101 BRIS speed figure in the Derby, which was his 6th start of the year. On the negative side, he did not compete in a stakes race as a juvenile, in that start he just missed with a 94 figure at Los Alamitos (we want 95+), and he runs on the lead. Regular rider John Velazquez gets the call again for trainer Bob Baffert, drawing post 3 as the 9-5 morning line favorite. 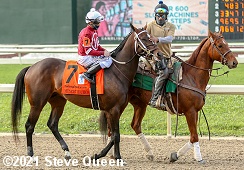 Midnight Bourbon comes here off a wide, bumpy trip in the Derby, his 4th race this year (we want 3-6 starts) where he checked in 6th, so he is coming off the correct race, inside 30 days, but not sharp. He did have a stakes win this year in the LeComte at Fair Grounds, and finished in the money in stakes company as a juvenile. Among his knocks, along with his "dull" race at Churchill, he comes up short on speed, with a juvenile top of 87 and a 3-year-old best of 98 when third in the Risen Star, and usually runs on or near the lead (his troubled start in the Derby placed him out of his element). New jockey Irad Ortiz Jr. picks up the mount for trainer Steve Asmussen and will break from the 5 hole on the 5-1 third choice. 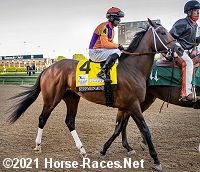 Keepmeinmind was 7th in the Derby, which was his third start this year. As a 2-year-old he ran a 98 when finishing 3rd in the Breeders' Cup Juvenile,, qualifying as an in-the-money finish in stakes company to go with his win in the Kentucky Jockey Club. However he is still winless as a 3-year-old, his best figure this year the 91 earned at Churchill Downs, his prep was not sharp, and he rallies from well off the pace. Regular rider David Cohen gets the call again for trainer Robertino Diodoro aboard the 15-1 longshot from post 2. 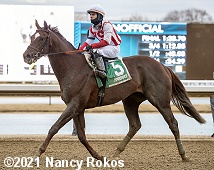 Crowded Trade is the first of 7 horses entered who did not come out of the Kentucky Derby; the strength of that angle is such that all 3 that did qualify, were 1-2-3 in ranking. He comes here off a 3rd place finish in the Wood Memorial, a sharp prep after earning a 104 when he just missed in the Gotham Stakes. The Wood was his third start this year, but also his third start lifetime, so he does not qualify under any of the juvenile requirements. The Wood was run April 3, six weeks ago, when we prefer horses coming off of 30 day layoffs or shorter. New jockey Javier Castellano picks up the ride for trainer Chad Brown from post 4 aboard the 10-1 shot. 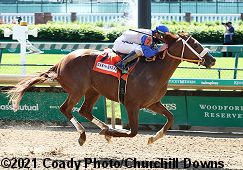 Ram makes his stakes debut in the Preakness after posting a juvenile best BRIS of 76 and a best this year of 88, both well short of par. He comes here off an allowance win on the Derby undercard, earning him a sharp prep 2 weeks out, in his 5th start this year. He usually stalks the pace which is the preferred runstyle, but will he be able to keep up with the pace of this field? New jockey Ricardo Santana Jr. rides the 30-1 longest shot on the board for trainer D. Wayne Lukas from the rail. 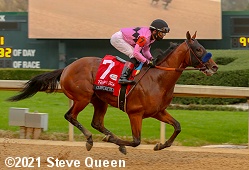 Concert Tour is Bob Baffert's second horse in the field, coming here off a 3rd place finish in the Arkansas Derby, giving him a sharp prep but 5 weeks out, in his 4th start this year. He does have two stakes wins his year, the San Vicente and the Rebel. However, like Crowded Trade he did not race as a juvenile so fails on those requirements, and his best BRIS fig of 97 is three points short of par. Finally he tends to race close the pace, so it remains to be seen how the race strategy plays out as stablemate Medina Spirit is also a front-runner. New jockey Mike Smith picks up the mount on the 5-2 second choice from the outside post 10. 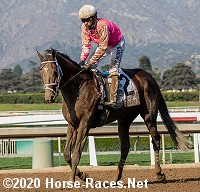 Rombauer was third in the Blue Grass Stakes and then skipped the Derby, a race where he earned a career best 96 BRIS. This was a sharp prep but 6 weeks out and short in speed figure, but also was just his second start this year, one short of the range we seek. He did win a stakes this year, the listed El Camino Real Derby at Golden Gate Fields. On the juvenile side he finished second in the American Pharoah but only earned an 89, 6 points short of par. New jockey Flavien Prat rides for trainer Mike McCarthy aboard the 12-1 shot from post 6. 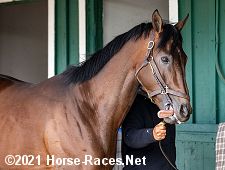 Risk Taking was a disappointing seventh in the Wood Memorial, clearly not a sharp prep off too long a layoff, in just his second start this year (one short of par). His 92 earned when winning the Withers is also short of the 100. He did not compete in stakes as a juvenile, however he did run a 98 BRIS in December and he does stalk the pace. New rider Jose Ortiz breaks from post 9 for trainer Chad Brown aboard the 15-1 shot. 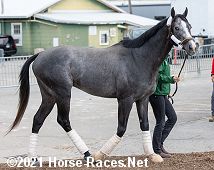 Unbridled Honor finished second in the Lexington on April 10, which is a sharp prep but 5 weeks out, in his 3rd start this year. He earned a 92 BRIS figure in that race, well short of the 100 par. He lacks a stakes win this year, and did not compete in stakes last year, with a juvenile best figure of just 84. Finally, he usually closes from well off the pace, not preferred over the stalker-favoring trip of the Preakness. New jockey Luis Saez picks up the ride for trainer Todd Pletcher, drawing post 8 aboard the 15-1 shot. 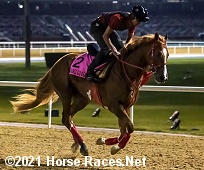 France Go de Ina is the first horse in recent memory to completely fail the analysis, as he did not qualify on any of our requirements. He only raced once this year (we look for 3-6 starts) where he finished a distant sixth in the UAE Derby at Meydan in Dubai, earning a 98 Racing Post Rating which roughly translates to a 93 BRIS, well short of the 100 par, and a whopping 7 week layoff, the longest of any horse in the field. As a juvenile he raced 3 times in Japan, none in stakes company, but with figures unavailable for these races, given they were not even listed stakes I will assume none met the 95 BRIS par. Finally, he usually closes from off the pace. Joel Rosario, who rode him in Dubai, gets the mount again for trainer Hideyuki Mori aboard the 20-1 shot from post 7.