There were three Breeders' Cup Challenge Series races in the juvenile divisions on Friday, opening day for the fall meeting at Santa Anita. Conditions were typical for early October with sunny skies and temperatures in the mid 90's, the main track fast and the turf course firm, with 5,062 fans in attendance. The 2-year-old Breeders' Cup Championship races will be run at Del Mar on Friday November 5.

The $300,000 American Pharoah Stakes (G1) featured a field of seven 2-year-olds going 1 1/16 miles looking for automatic entry into the Breeders' Cup Juvenile. Corniche was sent off as the 2-5 favorite off his debut win at Del Mar on September 4. In to challenge him included 4-1 second choice Rockefeller, a debut winner at Del Mar on August 28, and 13-2 third choice Oviatt Class, off his maiden win at third asking. 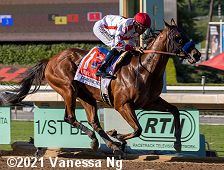 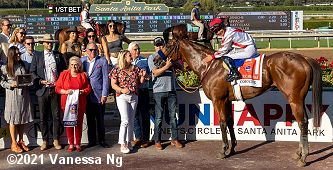 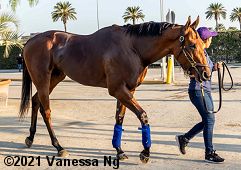 Left: Corniche in the winner's circle. Winning trainer Bob Baffert said, "You never know until you send them two turns whether they'll be able handle it or not, and it looked like he handled it pretty well. He's got a great mind so I'm pretty happy about that. I loved how they both broke well and were forwardly placed, that's where we like to be. Down the backside he was being chased by a really good horse. It was a really good race all around. The main thing is to keep them healthy and have them ready for the next dance. I just focus on these horses day in and day out."

Right: Corniche heads back to the barn after the race. 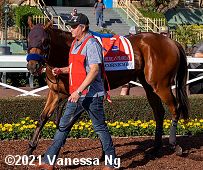 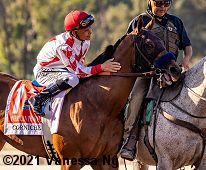 Left: Corniche in the paddock before the race.

Right: Corniche in the post parade. Winning jockey Mike Smith said, "That's what makes a good horse, a great horse, a champion, so to speak. Not only do they have the speed and the stamina, but they have the mind to go with it, and he's an extremely intelligent horse. He just aims to please. If you notice, I was aggressive with him leaving there and as soon as I put my hands down, he just put his ears up and waited on me, at every pole or as soon as he felt horses behind him, on his hip he would go just fast enough, kind of playing cat and mouse a little bit. I'm just excited about the upside to him. I think there is a whole lot there." 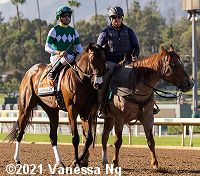 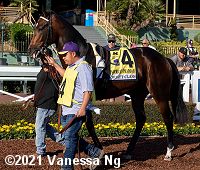 Right: Third place finisher Oviatt Class in the paddock before the race. The Keith Desormeaux trainee improved his record to 1 win, 0 seconds, and 2 thirds in 4 starts, earning $87,620 for owner James Downey.

The start of the American Pharoah Stakes. Winning owner Peter Fluor added, "When we first bought him, we thought that he was the best looking colt we've bought in five years. By the way he moved and his stride. We had obviously high hopes as anybody would. Then came his first race which was probably not better than I had hoped, but it was better than I ever thought it would be. Mike (Smith) was excited, so we got very excited about this. It was a very good field and for your second race to go into a Grade 1. Kudos to the horse and to Mike. We are very excited."


Kicking off the graded stakes action on Saturday was the $200,000 Chandelier Stakes (G2) featuring 7 two-year-old fillies going 1 1/16 miles looking for automatic entry into the Breeders' Cup Juvenile Fillies. Del Mar Debutante (G1) winner Grace Adler was sent off as the 9-10 favorite. In to challenge her included 7-2 second choice Ain't Easy off her debut win on August 21 and 5-1 third choice Electric Ride, a debut winner on August 28. 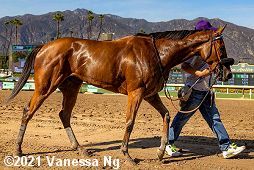 Left: Ain't Easy in the winner's circle. Winning trainer Phil D'Amato said, "She acted very professional, sitting behind horses. When Joel (Rosario) wanted to, she came up the inside, which I like to see with a young horse. She just looked like she was having fun in the stretch. I think it set up perfect. A good two turn experience, confidence booster, an easy win, where it didn't look like she was taxed too much, so I like everything I saw right now. I'm excited, I won a lot of stakes down the hill, I won my first Breeders' Cup down the hill, so I'm excited to get back. I think I have two nice horses in here."

Right: Ain't Easy returns to the barn. Winning jockey Joel Rosario said, "It was a very good trip, she broke really sharply. It was her first time going long and she did it really easily. You don't know how good you are until you go with tough competition like this, and she did it the right way. She sat up a little bit at the rail and then finished very nicely. I feel very good about it." 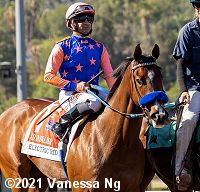 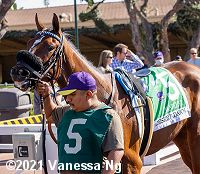 Right: Third place finisher Desert Dawn in the paddock before the race. The Phil D'Amato trainee improved her record to 1 win and 2 thirds in 3 starts, earning $74,400 for owner-breeder H & E Ranch, Inc. 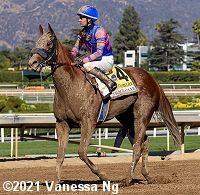 Right: The fillies break from the gate for the Chandelier.

Jockey Flavien Prat sent Charmaine's Mia to lead down the hill through fractions of 21.61 and 42.95 while pressed by 10-1 Law Abidin Citizen and stalked by Lieutenant Dan. Turning for home, jockey Geovanni Franco moved Lieutenant Dan 3 wide for room and he took over, opening up a 2 length lead through 3/4 in 1:05.66. Despite drifting out late Lieutenant Dan held off late-running Snapper Sinclair to win by 1/2 a length in 1:11.74. It was a neck back to 36-1 Chaos Theory third. 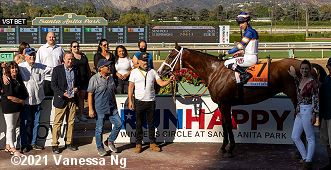 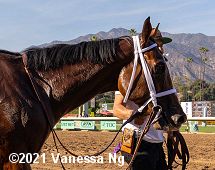 Left: Lieutenant Dan in the winner's circle. Winning trainer Steve Miyadi said, "I don't feel he's a real miler against top horses, and I consider the 6 ˝ furlongs a mile so, I was worried about that. Down in Del Mar you need a good post inside and it's a different race. It's fantastic to run down that hill and to win." Jockey Geovanni Franco added, "He's a pretty fast horse and he's very versatile. He broke sharp like he always does and put me in a nice spot where if they were going too slow, I could have gone and if they were going too fast, I could have sat back. All in all, he was the one taking me through the trip. At the end of the race he kept on going. I heard some noises of people coming but he never slowed down or waited for anybody."

Right: Lieutenant Dan returns to the barn. Winning owner Nick Alexander said, "It was so unexpected. I think he was the seventh or eighth foal out of the mare (Excusabull), and the first seven did nothing so, we had very low expectations for this horse and he just continues to succeed them. He just loves to win. I love that turf course. We have always excelled on it and Grazen babies just seem to love that distance and that downhill. It is so beautiful. 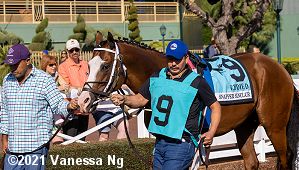 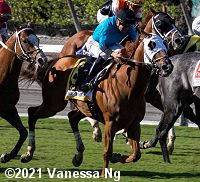 Left: Second place finisher Snapper Sinclair in the paddock before the race. The Steve Asmussen trainee improved his record to 7 wins, 9 seconds, and 4 thirds in 34 starts, earning $1,833,340 for owner Jeffrey Bloom.


Kicking off the fall meet stakes action was the $100,000 Speakeasy Stakes, a 5 furlong turf sprint for two-year-olds and a Breeders' Cup Challenge Series race in the Juvenile Turf Sprint division. Debut winner Forbidden Kingdom was sent off as the 9-5 favorite in the field of 6 over 2-1 One Timer, winner of the Victoria Stakes at Woodbine, and 11-4 Miss Alacrity, winner of the Colleen at Monmouth. 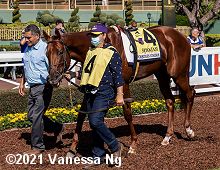 Left: One Timer in the winner's circle. Winning jockey E.T. Baird said, "He broke well, I had to ask him out of there, but he's pretty professional outside of the post parade. He just kept running true. I think he took to the (turf) great. We worked him one time in Chicago over the (Arlington) grass and I happened to work another horse, an older horse on the same morning, and the older horse ended up winning (a) stake after that work, against older horses, but he didn't work that well over it, and this horse worked excellent over it. It pretty much hasn't changed he just likes to go, I mean he's competitive, he loves to run."

Right: Third place finisher and beaten favorite Forbidden Kingdom in the paddock. The Richard Mandella trainee improved his record to 1 win and 1 third in 2 starts, earning $54,000 for owners MyRacehorse and Spendthrift Farm.