Opening weekend for Santa Anita's fall meet concluded with the premier race for older fillies and mares, the $200,000 Zenyatta Stakes (G2), a 1 1/16 mile main track trip with the winner earning automatic entry into the Breeders' Cup Distaff. Conditions were similar to Saturday, with sunny skies and temperatures in the high 90's for the 7,086 fans in attendance. Torrey Pines Stakes (G3) winner Private Mission was sent off as the 11-10 favorite in the field of 8. In to challenge her included 8-5 second choice As Time Goes By, 6th in the Personal Ensign (G1), and 6-1 third choice Stellar Sound, 3rd in the Rancho Bernardo Handicap (G3). 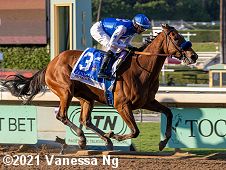 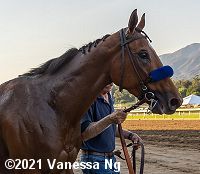 Left: Private Mission in the winner's circle. Winning owner Susan Chu said, "I am so psyched for Bob and the entire team. We are grateful for everybody who made this happen today, we are so grateful."

Right: Private Mission heads back to the barn after the race. Winning trainer Bob Baffert who trains the first two finishers said, "I'm happy to run one-two. Private Mission, I'm glad I stayed home with her. I decided this would be best for her with the Breeders' Cup in mind, we didn't want to stress her. She's on the improve, getting better and better. I'm really happy with the way both fillies ran." 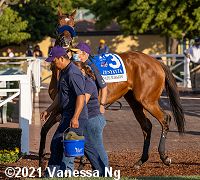 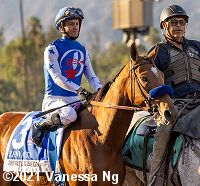 Left: Private Mission in the paddock before the race. Winning jockey Flavien Prat said, "She broke well and got herself into the race. She relaxed well and took a nice breather going to the 3/8 pole and ran good when I asked her to make her move. I thought this race was better than last time, for sure." 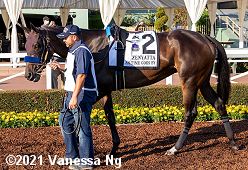 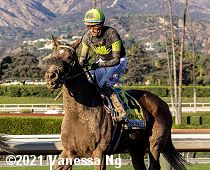 Left: Second place finisher As Time Goes By in the paddock before the race. The Bob Baffert trainee improved her record to 4 wins, 3 seconds, and 1 third in 10 starts, earning $455,600 for owners Michael Tabor, Mrs. John Magnier, and Derrick Smith.

Jockey Geovanni Franco sent 46-1 longest shot Eyes Open to lead out of the chute through fractions of 21.99 and 45.15 while pressed by Scotish Star and stalked by Ce Ce. Turning for home Ce Ce took over through 3/4 in 1:09.46. Under a hand ride by Victor Espinoza, Ce Ce powered away to win by 5 lengths over 32-1 On Deck. It was a neck back to Scotish Star third. 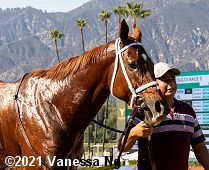 Left: Ce Ce in the winner's circle. Winning trainer Mike McCarthy said, "This is great, I couldn't have written this up any better. She had a couple of easy weeks after Saratoga, I thought she was doing well enough today to do it in the fashion she did it. Especially when I wasn't sure how the pace would wind up early. I couldn't be happier with her. We are looking forward to getting her to Del Mar."

Right: Ce Ce heads back to the barn. Winning jockey Victor Espinoza said, "She's good right now. Her last race was a little tough, but I worked her here and she was ready to run today. This race will be good for her confidence going into the Breeders' Cup." 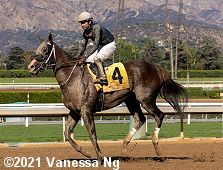 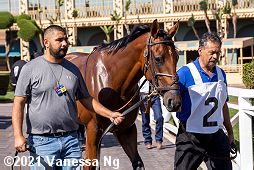 Right: Third place finisher Scotish Star in the paddock before the race. The Richard Mandella trainee improved her record to 2 wins, 1 second, and 1 third in 5 starts, earning $46,131 for owner-breeder La Providencia and co-owner LNJ Foxwoods.

The $200,000 Zuma Beach Stakes featured a field of 10 two-year-olds going 1 mile on the turf. Del Mar Juvenile Turf Stakes winner Mackinnon was sent off as the 6-5 favorite over 3-1 second choice Silver Surfer, 3rd in the Del Mar Juvenile Turf, and 5-1 third choice Law Abiding, 3rd in his debut last out. 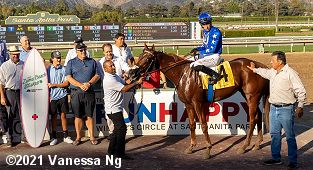 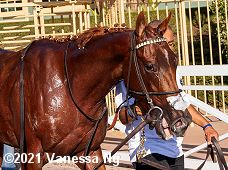 Left: Mackinnon in the winner's circle. Winning trainer Doug O'Neill said, "We didn't get the most ideal trip. He was a little green early but Juan said once we got the first half mile behind us, he settled nicely and as you could see, he finished up real well. If he comes out of this in good shape, it's on to the Breeders' Cup (Juvenile Turf)."

Right: Mackinnon heads back to the barn. Winning jockey Juan Hernandez said, "He's getting better every race. He broke good, there was little speed, and he felt a little tired on the right side, so he changed leads to the right side. That's why I had to check a little bit and decided to stay inside and save ground and make one run. He came with a huge run today. He's getting better. He's improved a lot because the last couple of time I rode him, I had to work a little hard in the stretch with him, today I asked him a little and after that he just took off again." 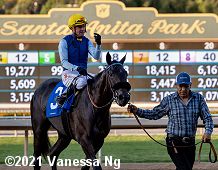 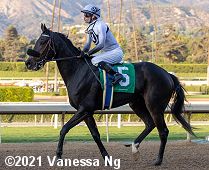 Left: Cairo Memories heads to the winner's circle. Winning trainer Bob Hess Jr. said, "She's been doing everything right," said Hess. "We were encouraged by the way she broke her maiden and she's been moving forward in her training. Hopefully, this sets us up for the Breeders' Cup." Jockey Kent Desormeaux added, "She brought some new energy from her first start. I think she was excited. I spent more time in the post parade calming her down. I worked her at Del Mar and before I ever rode her I thought she was great. I was with the owners in the paddock and that was the longest wait because I wanted to see how deep the water was, and she's shown that she could really swim."

Kicking off the Sunday stakes quintet was the $75,000 Unzip Me Stakes for three-year-old fillies sprinting 6 1/2 furlongs on downhill course. Burgoo Alley was the 8-5 favorite in the field of 7 over 3-1 Zero Tolerance and 7-2 Thrilling. 10-1 Equilove dueled for the lead with Thrilling down the hill and across the dirt through fractions of 21.86 and 43.45 while stalked by 12-1 Carpe Fortuna. Turning for home Carpe Fortuna gained the lead through 3/4 in 1:05.66 but Zero Tolerance, 6th early under Flavien Prat, came out 5 wide to win by a length in 1:11.67. It was a neck back to favorite Burgoo Alley third. 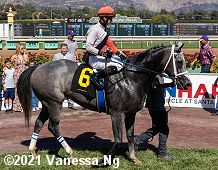 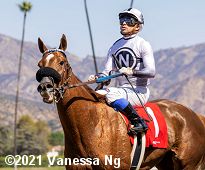 Left: Zero Tolerance in the winner's circle. Winning trainer Peter Miller said, "I thought that she's kind of a ‘tweener,' she's not really a two turn filly but five might be a little short for her, so we thought this would be kind of the distance that would be good for her. I love the hill and I'm glad to have it back. She broke bad but Flavien, he didn't panic, I'm just glad that he had enough horse. I think she's equally as good on dirt and turf, so it gives us a lot of options. I think her only real limitations will be distance, I don't think she is a one turn filly, but she's a nice one turn filly."