The major New York prep race for the Triple Crown is the $750,000 Wood Memorial Stakes (G2) Presented by Resorts World Casino, contested at 1 1/8 miles, one complete circuit of the Aqueduct main track, worth 100 points to the winner as part of the Kentucky Derby Championship Series. Conditions were typical for early April at the Long Island oval near Kennedy Airport, with partly cloudy skies and temperatures in the low 50's. Withers Stakes (G3) winner Risk Taking was sent off as the 9-4 favorite in the field of 9 three-year-olds. In to challenge him included 11-4 second choice Crowded Trade, 2nd in the Gotham (G3), and 3-1 third choice Prevalence, making his stakes debut after winning his first 2 starts. 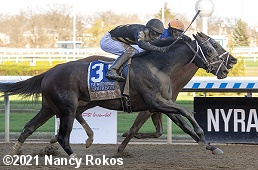 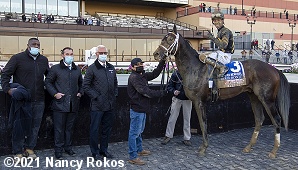 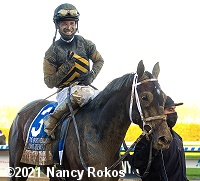 Left: Bourbonic in the winner's circle. Winning trainer Todd Pletcher said, "We always felt this horse [Bourbonic] would handle added distance. He was able to get a perfect trip and sit back and make one late run. He was able to get there just in time. It was a big effort. To have any chance, I think the only way he could be successful was to stay back and make one late run. He doesn't have any early speed. Right: Bourbonic returns after the race. Winning jockey Kendrick Carmouche said, "I rode this horse twice before. Once on the turf, which he didn't really like. Then I came back and rode him in a starter allowance after he broke his maiden. He ran such a good race. He fought back, which I really like with young horses. I like that fight at a young age." 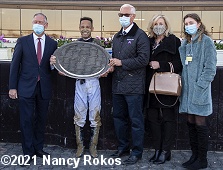 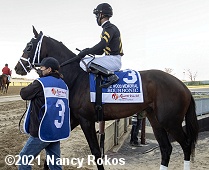 Left: The trophy presentation for the Wood Memorial. Pletcher added, "I'll talk to all the connections and see what everybody wants to do but that was the purpose of being in today's race; take a shot and see who would step up and fortunately it worked out. Sometimes the worst thing you can have is a hot hand in January and February. We were hoping something would come together and we always thought he had potential to step up. It was good to see him do it."

Right: Bourbonic heads out for the post parade. Carmouche added, "I was just going to sit, sit, sit, and hopefully get out the last 1/4 mile. I knew he would go on from there. My horse was in a good stride. Each pole I was picking them up one by one without even asking. I'm thrilled for Calumet Farm. I won my first Grade 1 with True Timber in the Cigar Mile for them and now I won the Wood for them. These past six months of my career have just been what you dream of." 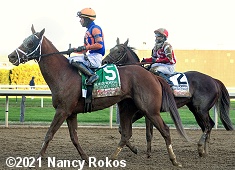 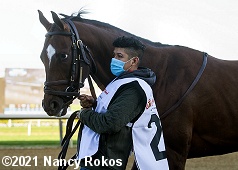 Left: Second place finisher Dynamic One returns after the race. Trainer Todd Pletcher said, "The one thing we were concerned about is if he made the lead he might idle a little bit. Jose said he tried to time it as well as he could and he was hoping the leader would carry him to the wire more than he did. It was another step forward for him." Jockey Jose Ortiz added, "Passing the 1/16 pole I thought I would hold on, but we couldn't get there. It was a very tough beat, but the other horse put up a good run the last sixteenth and beat me. My horse ran a hell of a race. I think he would handle the mile and a quarter pretty nicely."

Right: Third place finisher Crowded Trade walks over before the race. Jockey Eric Cancel said, "I had a good position. It was his first time going a mile and an eighth, so I wanted to be relaxed with the horse. He was very comfortable where he was and he gave me all that he had. He got beat by a horse that came running at the end and one that was there the whole way. He ran very good." 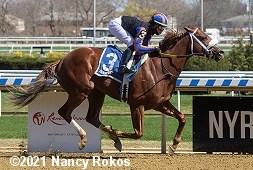 Kicking off the graded stakes quintet was the $200,000 Bay Shore Stakes (G3) featuring a compact field of just five 3-year-olds sprinting 7 furlongs on the main track. Swale (G3) winner and Fountain of Youth (G2) runner-up Drain the Clock was sent off as the 3-10 favorite over 4-1 Whiskey Double, an allowance winner last out, and 8-1 Too Boss, 4th in an allowance. 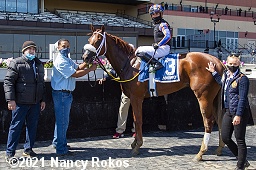 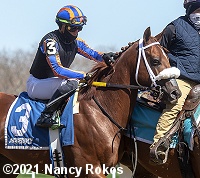 Left: Drain the Clock in the winner's circle. Winning trainer Saffie Joseph Jr. said, "I thought he kicked away well at the top of the lane and did what he had to do. If you ease up on him, he's going to relax. [Beren] didn't get a good break, unfortunately and we didn't get pressed. If that horse went, we were going to sit. He's a very versatile horse and he doesn't need the lead. He acted up in the gate a little bit. In the morning, he's fine; but it's something he does in the afternoon sometimes. That was the only anxious moment."

Right: Drain the Clock in the post parade. Winning jockey Irad Ortiz Jr. said, "He just wants to break out of there. He broke a little slow out of there but he put himself right away into the race and took me to the lead. I let him relax and then I asked him to go and he was running hard to the wire. He was running so I just showed the whip and never hit him back. I put the stick away. He was right there. He's a nice horse and he waits for you. It's the first time I've been on him; he's nice." 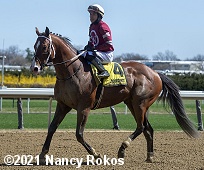 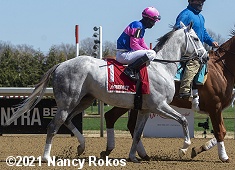 Left: Second place finisher Whiskey Double returns after the race. Jockey Jose Ortiz said, "[Beren] stumbled and that hurt our chances, for sure. I think if he had a clean break, we'd have had a better shot to win the race. The winner was wrapped up in the last few yards, but the key was the five horse stumbling from the gate."

Right: Third place finisher Too Boss in the post parade. The Todd Pletcher trainee improved his record to 1 win, 1 second, and 1 third in 4 starts, earning $86,460 for owner-breeder Michael Cascio. 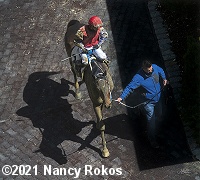