There were 5 graded stakes races run over the Aqueduct main track on Saturday. The only Grade 1 event on Wood Memorial day was the $300,000 Carter Handicap (G1) for older horses sprinting 7 furlongs and an early prep for the Breeders' Cup Sprint (G1). Gulfstream Park Sprint (G3) winner Mischevious Alex was sent off as the 4-5 favorite in the field of 5. In to challenge him included 5-2 second choice Mind Control, 3rd in the Mr. Prospector (G3), and 3-1 third choice Chateau, winner of the Tom Fool Handicap (G3). 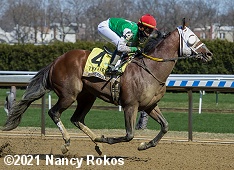 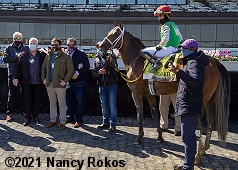 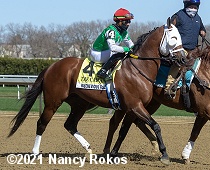 Left: Mischevious Alex in the winner's circle. Chuck Zacney of winning owner Cash is King Stable said, "He came to Saffie's barn in December and he took it from there. This was always our goal: we felt this horse deserved a Grade 1. That's what we were shooting for, and now he has it. A year ago, he made the winner's circle here at the Gotham at a mile, so we have a lot of good memories here at Aqueduct. As far as the next race, we're going to strongly consider the [Met Mile] on the Belmont undercard. It's another Grade 1. If not, we'll probably shorten him up after that. Six-to-seven furlongs seems to be in his wheelhouse."

Right: Mischevious Alex in the post parade. Winning trainer Saffie Joseph Jr. said, "I was a little concerned early in the race. He was a little far back and I know the track has been heavy and I didn't know if he could make up that much ground. Obviously, he was giving Irad [Ortiz, Jr.] some feel and he rode him with a ton of confidence. He ran well but I didn't expect him to win a Grade 1 as easy as he did." 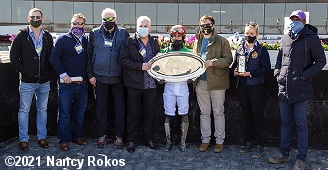 The trophy presentation for the Carter Handicap. Winning jockey Irad Ortiz Jr. said, "I broke so well and the other horse [Chateau] went, so there was some speed. I was in no hurry. I just rode him with confidence and patience. Turning for home, I changed leads on him and he just took off. Now, he's a growing horse mentally. Saffie has done a great job with him. He's back. He's the same good horse he was last year."

Trainer Saffie Joseph added, "Chuck has always wanted to go to the Met Mile because we want to make [Mischevious Alex] a stallion. Winning a Grade 1 today takes a lot of pressure off. In my opinion, he wants to sprint six or seven furlongs. Can he get a mile? Yes, against the right company. But it all depends on who shows up. The Met Mile is definitely under consideration and then the two Grade 1s at Saratoga [Forego and Vanderbilt]. There's a lot of options. Hopefully, he comes out of it good and then we'll make a game plan." 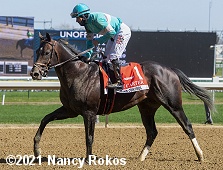 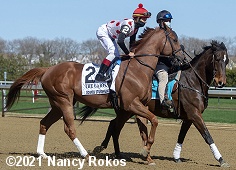 Left: Second place finisher Mind Control returns after the race. Trainer Gregg Sacco said, "We were stuck on the rail a little bit but that's how it goes. We took what they gave us. The winner ran dynamite, take nothing away from him. Congratulations to Saffie and his crew. We were coming off a little bit of a break and we'll meet again down the road. We're very proud of Mind Control. It was a great way to start the year. "We could try the Met Mile. I'll talk with my brother [Rick Sacco] and the owners and figure out our plan, but it looks like he's back on track. He certainly loves New York." 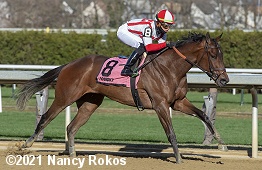 The filly counterpart to the Wood Memorial is the $250,000 Gazelle Stakes (G3) for 3-year-old fillies, also contested at 1 1/8 miles, worth 100 points to the winner as part of the Kentucky Oaks Championship Series. Busher Invitational Stakes winner Search Results was sent off as the 2-5 favorite in the field of 6 (after 2 scratches). In to challenge her included 4-1 second choice Alwayz Late, making her stakes debut off 2 straight allowance wins, and 13-2 third choice The Grass is Blue, 3rd in the Busher after winning the Busanda. 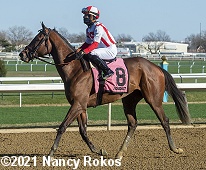 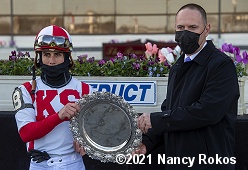 Left: Search Results returns after the race. Winning trainer Chad Brown said, "I thought she was very professional today. She maybe lost focus when she surged to the front and there was no one around her in deep stretch. When she had a horse in front of her, I loved the way she was moving into the bit. I was relieved to see that she could handle the 1 1/8. We were cautiously optimistic, but you always have to see them do it first to be sure."

Right: The trophy presentation for the Gazelle with jockey Irad Ortiz Jr. and trainer Chad Brown. Ortiz Jr. said, "She relaxed so good. She did everything right. We broke out of there and had a target. Going into the last turn, I had plenty of horse, I was just waiting to make my move. When I asked her, she really picked it up." 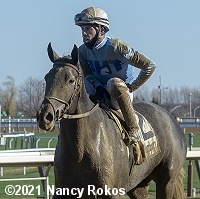 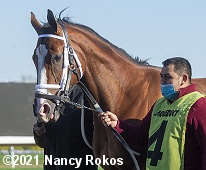 Left: Second place finisher Maracuja returns after the race. Winning trainer Rob Atras said, "The track was a little slow and they were going slow, but I wasn't too concerned as she has that late running style. She was settled and when Kendrick [Carmouche] asked her to pick it up, she did it. She raced wide and closed and ran a really game second. I'm really happy with her effort."

Right: Third place finisher Army Wife walks over before the race. Jockey Trevor McCarthy said, "I had an inside trip the whole way. The hole was there when we shot for it. We had a bit of inside pressure and outside pressure. It was just a tough situation. Sometimes, you get lucky. Sometimes, you don't."

The fillies break from the gate for the Gazelle. 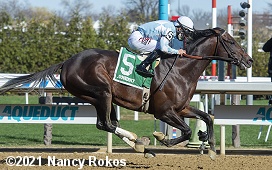 Jockey Trevor McCarthy sent 9-2 fourth choice Backsideofthemoon to the lead first time by through easy fractions of 25.54, 52.08, and 1:17.29 while pressed by Modernist and stalked by 44-1 longest shot Tintoretto. Turning for home, Modernist swept to the front 4 wide through 1 mile in 1:41.73. Kept to task by Junior Alvarado, Modernist drew off to win by 2 1/2 lengths over late-running Haikal in 1:54.38. It was another 3 3/4 lengths back to Limonite third. 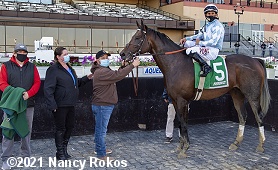 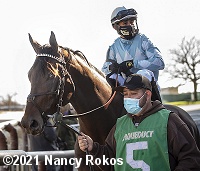 Left: Modernist in the winner's circle. Leana Willaford, assistant to winning trainer Bill Mott said, "I was expecting him to be close to the lead with the scratch of Mr. Buff. This horse has been effective near the lead in the past. We told Junior, 'Don't take anything away coming easy.' I was really happy with him. He's matured both physically and mentally. I think he's going to have a good year."

Right: Modernist heads out to the track before the race. Winning jockey Junior Alvarado said, "He helped me get my position in the first turn and after that I was just a passenger. I was just waiting to turn for home to ask him and he kicked on very nicely. At the 1/4 pole, when I asked him to run, he picked it up so quickly that he didn't even have a chance to switch leads. Then, I felt him running faster and I didn't want to badger him to switch leads until we passed the 1/8 pole. I pulled a little on my inside reins and then he switched leads and kept on. Nothing to be worried about." 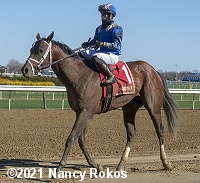 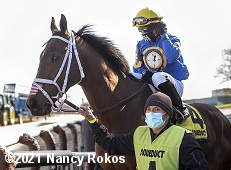 Left: Second place finisher Haikal returns after the race. Jockey Irad Ortiz Jr. said, "He had a really good race I think. The winner is a nice horse, and we just got beat. We were second-best today. They went a little too slow I think [with the fractions], but we can't control that. The pace didn't help me, but he just beat by a nice horse. I thought I had a good chance but I had to move a little early. We went too slow. I asked him a little early and he responded so well, but the winner just kept going."

Right: Third place finisher Limonite heads out to the track before the race. The Amira Chichakly trainee improved his record to 6 wins, 3 seconds, and 5 thirds in 22 starts, earning $338,195 for owner Novak Stable.