Kentucky Oaks Day on Friday usually draws the second largest attendance of any raceday in North America, second only to the Kentucky Derby run the very next day, however due to coronavirus restrictions, attendance was limited to just 41,472, a far cry from the 100,000+ usually packing the stands, apron, paddock area, and infield. Five graded stakes were contested on the Oaks undercard, both over the fast main track and firm Matt Winn turf course. Conditions were excellent for late April, with partly cloudy skies and temperatures in the mid 70's. Churchill Downs president Mike Anderson said, "The success of the 147th Kentucky Oaks is a tribute to the team at Churchill Downs, our community partners, sponsors and participants who worked tirelessly to ensure that we could safely and responsibly welcome back the fans that are an essential part of this great tradition."

The first Grade 1 stakes of the Churchill Downs meeting is the $500,000 La Troienne Stakes (G1) for older fillies and mares going 1 1/16 miles on the main track. Last year's Kentucky Oaks (G1) winner Shedaresthedevil was sent off as the 8-5 favorite in the field of 7 off her win in the Azeri Stakes (G2). In to challenge her included 2-1 second choice Dunbar Road, unraced snce 3rd in the Breeders' Cup Distaff (G1), and 7-2 third choice Envoutante, 4th in the Azeri.

Jockey Florent Geroux sent Shedaresthedevil to the lead first time by through fractions of 23.99, 47.94, and 1:11.71 while pressed by 19-1 Bajan Girl and stalked by Envoutante. Turning for home Envoutante moved up to challenge through 1 mile in 1:36.21 but Shedaresthedevil turned her away late to win by a length gate-to-wire in 1:42.69. It was another 2 lengths back to 10-1 Finite third. 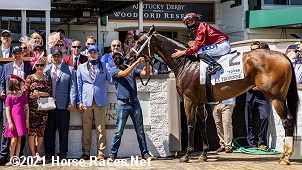 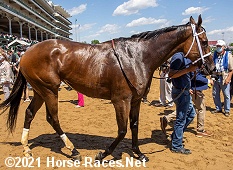 Left: Shedaresthedevil in the winner's circle. Winning trainer Brad Cox said, "This is huge. She has been training really well coming up to this. We freshened her up after the Spinster last year. We didn't want to try and chase the Breeders' Cup Distaff. It was obviously the right move. She's moved forward at 4. She's shown that in her two starts. She has a lot of fight and determination down the lane. She showed that again today down the lane. She's now a Grade 1 winner at 4. We'll target the Breeders' Cup Distaff and work our way back from that. There some obvious races in New York and one at Del Mar we are thinking about."

Right: Shedaresthedevil heads back to the barn. Winning jockey Florent Geroux said, "She loves to race at Churchill; she showed it again today. They made me work hard for this. When we turned for home, she kept her head up and I could tell she was digging in. Those other fillies came to her but she showed a lot of heart and a lot of grit and I knew she wasn't going to let them by." 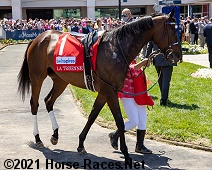 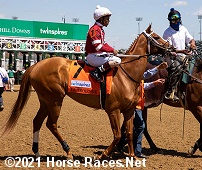 Left: Second place finisher Envoutante in the paddock. Her jockey Brian Hernandez Jr. said, "She ran hard. Turning for home when it opened up, I thought 'Oh good, I'm going to get through and win.' She spurted for me but the other filly just had more. On paper it looked like there would be a little more speed than they showed. I thought for sure somebody was going to press her, but the one filly that tried just wasn't good enough. She went for a half but that was it. The winner is a fighter and she got a breather out there and that made it tough."

Kicking off the Friday stakes sextet was the $400,000 Alysheba Stakes (G2) featuring 6 older horses going 1 1/16 miles on the main track. Santa Anita Handicap (G1) third place finisher Maxfield was sent off as the 1-2 favorite over 3-1 Roadster, 4th in the New Orleans Classic (G2), and 8-1 Chess Chief, winner of the New Orleans Classic. 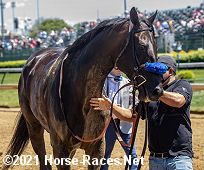 Left: Maxfield in the winner's circle. Winning jockey Jose Ortiz said, "I was very confident all the way around. We were right where I wanted to be. When it came time to go, he was there for me. He's one of the nice ones."

Right: Maxfield heads back to the barn. Winning trainer Brendan Walsh said, "I just told Jose (Ortiz) to get him in a nice rhythm, he likes to roll along and get into that cruising speed. He's an adaptable horse, so he's easy to ride under whatever the circumstances. Physically he's a stronger horse, as time's gone on, he's gradually filled out and he's up to his full maturity, which is exciting. He loves this track, and he hasn't done anything wrong. But actually he hasn't done anything wrong at any track where he's run. He's just a very good horse." 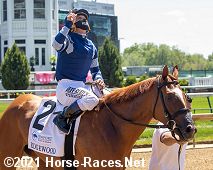 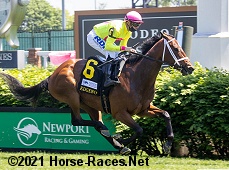 Left: Gift List heads to the winner's circle. Winning trainer Brian Lynch said, "Off the last race, in her first U.S. debut, she gave a great run that day (April 3 in the Appalachian-GII at Keeneland), in a race that had no pace. She's really trained so well from her last start to this, even though we had to work her on the dirt, which was a new thing to her. She was very comfortable getting over it, and was getting plenty out of her works. I had a good feeling going into this race, that if Aunt Pearl were to stub her toe, we'd have a good shot. She (Aunt Pearl) was a big obstacle, no doubt. Undefeated filly. Breeders' Cup winner. But we all know, and I've run into it myself with Oscar Performance, some of them take to this course and some just don't. It had a little bit of give in it today, and my filly had some good races on soft and heavy turf. Maybe that had something to do with it."

Right: Second place finisher and beaten favorite Aunt Pearl leads first time by. Her jockey Florent Geroux said, "She was traveling great, going to the back side, she was relaxing, I just had no horse down the lane. She's a very small filly. In my opinion, she did not move forward as much as some of those other horses."

The $300,000 Eight Belles Stakes (G2) featured a field of 12 three-year-old fillies sprinting 7 furlongs on the main track. Breeders' Cup Juvenile Fillies (G1) runner-up Dayoutoftheoffice was sent off as the 3-1 favorite over 7-2 Slumber Party, 2nd in the Beaumont (G2), and 5-1 Caramel Swirl, a maiden winner at 5th asking last out. Jockey James Graham sent 15-1 Euphoric to the lead out of the chute through fractions of 21.89 and 44.46 while pressed by 13-1 Windmill and stalked by Dayoutoftheoffice. Turning for home, Dayoutoftheoffice gained the lead through 3/4 in 1:09.16 but 16-1 Obligatory, last early under Jose Ortiz, came out 7 wide for room and rallied to win by a length in 1:21.89. It was another 1 3/4 lengths back to 24-1 Make Mischief third. 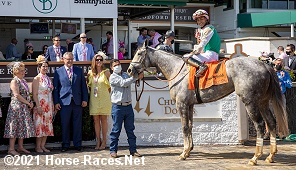 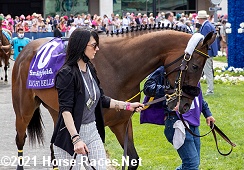 Left: Obligatory in the winner's circle. Winning trainer Bill Mott said, "I think she was a little confused when she ran two turns in New Orleans (Fair Grounds Oaks). She ran a very big effort at Gulfstream, had a little trouble, had to check coming around, you could see visually it was a very good effort. We thought she was good enough to go to the Fair Grounds Oaks, I think she's good enough, but she's green and the two turns confused the heck out of her. Maybe we could find out down the road that she's a better one-turn horse. I think five weeks away, they run the Acorn. I have no reason to believe she can't get a mile. And sometimes the two-turn deal could be a greenness thing. The pace today turned out good. We both knew there was a tremendous amount of speed in the race. She was able to close into it. She had a good kick. You just hope it didn't take too much out of her, she got the win and I think she earned a ticket into a good race like the Acorn."

Right: Second place finisher and beaten favorite Dayoutoftheoffice in the paddock. Her jockey Gerardo Corrales said, "She ran her heart out. I thought my filly was in a good position turning for home but could not hold off the winner."

Immediately before the Oaks, the $250,000 Twin Spires Turf Sprint (G2) featured a field of 11 older horses sprinting 5 1/2 furlongs on the Matt Winn Turf Course. Maryland Million Turf Sprint and Claiming Crown Canterbury Stakes winner Fiya was sent off as the 2-1 favorite over 7-2 Diamond Oops, 9th in the Mr. Prospector (G3), and 4-1 Fast Boat, winner of the Pulse Power Turf Sprint. 11-1 Just Might and Fiya dueled for the lead down the back and around the turn through fractions of 22.15 and 45.01 while stalked by 35-1 Ambassador Luna. In the stretch, the pacesetters tired badly after 5f in 57.11, as Fast Boat, 9th early, came out 5 wide under Irad Ortiz Jr. and outfinished fellow closer 5-1 Sombeyay to win by 1/2 a length in 1:03.29. It was another length back to 22-1 Classy John third. Fiya finished last beaten 8 1/2 lengths and was vanned off.
Results chart from DRF 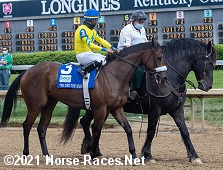 Left: Fast Boat in the winner's circle. Winning trainer Joe Sharp said, "With him its surface and, for some reason, all the rest of us love New Orleans and he's the exception. He was training too well,like his old self, but when we'd lead him over in the afternoon, we wouldn't see the Fast Boat that we knew was there. We saw it at Houston. We sent him back to the farm (after Sam Houston) and Rosie (wife Napravnik) let him be a horse for 30 days and legged him back on the farm. We brought him back in, worked him three times, and luckily we got some sun and wind today. He likes this turf course too, he's 3-for-4 on it, and everything fell into place. Brad Grady has been very patient with the horse over the years and giving him plenty of spacing between races."

Right: Last place finisher and beaten favorite Fiya in the post parade. Fiya, who came into the race off a 146 day layoff, contested the pace along the inside until the furlong marker, then faded fast and was vanned off. Owner Robert Masiello said, "Think most likely it's a case of heat exhaustion. He tends to be a sweaty horse but wasn't sweating at all in the paddock or after the race."