The highlight of the Belmont Park Fall Championship Meeting is the $750,000 Jockey Club Gold Cup (G1), a major prep for the Breeders' Cup Classic, contested at the Classic distance of 1 1/4 miles on the main track. A field of just 7 older horses went to post on Saturday afternoon before 10,481 fans under overcast skies and temperatures in the mid 60's, with Stay Thirsty sent off as the 6-5 favorite in his first start against older horses, after winning the Jim Dandy (G2) and Travers (G1). In to challenge him included the 7-5 Preston Stables entry of Woodward (G1) runner-up Flat Out and Brooklyn (G2) wnner Birdrun, and 8-1 third choice Drosselmeyer, 7th in the Sword Dancer (G1) last out.

Jockey Rajiv Maragh sent 11-1 Rodman to the lead on the clubhouse turn and he set easy fractions of 24.17, 48.56, and 1:12.66 over the muddy, sealed track while as many as 2 lengths ahead of Birdrun and Stay Thirsty stalking the pace second and third. On the far turn, Rodman tired as Flat Out, who sat 4th early, moved up to take a short lead through 1 mile in 1:37.29. 9-1 fourth choice Drosselmeyer, fifth early, put in a late rally, catching Stay Thirsty late, but was no match for Flat Out who cruised under the line 2 1/4 lengths in front in 2:03.17. Half a length separated runner-up Drosselmeyer and favorite Stay Thirsty in third. 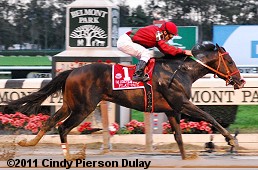 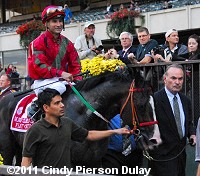 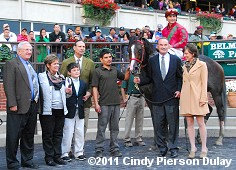 Right: Flat Out in the winner's circle with trainer Charles "Scooter" Dickey on the far left. Dickey said, "He likes to stay out, I think, but he doesn't have to. The less amount of dirt in his face the better. Alex rode him perfect. He did everything perfectly. I never was worried about the 1 1/4. It seemed to be a decent pace. I liked the 48 (seconds); that's just the way he likes to run. He seems to like this track, he's 2-for-2 and he ran two real good races at Saratoga. You can't knock those horses he ran against there. This is my first Grade 1 win; you wouldn't believe how big this is. I've been training since 1963. It's tremendous. It's hard to fathom, but I like it. We're going to be there and try (to beat Tizway, Uncle Mo, and Havre de Grace). We'll go back to Monmouth tonight and ship to Kentucky the day after tomorrow." 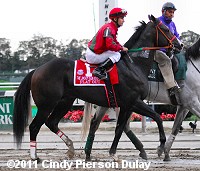 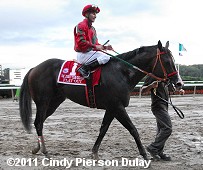 Left: Flat Out warms up before the race. Jockey Alex Solis said, "He handled the track fine. I talked to Scooter in the paddock. I said, 'The track is playing really fast. I might have to use him a little bit leaving the gate to make sure we stay close.' In a situation like today, I had to do that. It gets him out of his game a little bit, but it was something we had to do. He never really gives up, so I wasn't concerned about the distance." 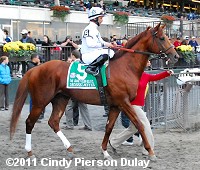 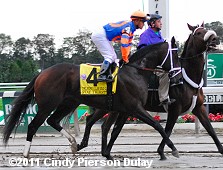 Left: Second place finisher Drosselmeyer heads out to the track. His jockey Jose Lezcano said, "He gave me a big run. Once he changed leads, he took off. He gave me everything he had coming down the stretch, but Flat Out wasn't coming back to us." Trainer Bill Mott added, "These guys were just too fast for him. Drosselmeyer ran real well. We'll have to see whether he goes to the Classic or the Marathon."

Right: Third place finisher and beaten favorite Stay Thirsty warms up before the race. His jockey Javier Castellano said, "He was in a great position and that's where I wanted to be. I wanted to be stalking, but I don't think he really handled the track at all. It's muddy and it wasn't the same the track as when we ran in the Belmont, that day was a little more of a sloppy track. Unfortunately today the track is more tiring, I don't think he liked it too much. It was a big difference for him, he broke good, but he kind of struggled."