The $200,000 Kelso Handicap (G2) is a major prep for the Breeders' Cup Dirt Mile (G1), but is also a potential Classic (G1) prep. After Sangaree scratched, just 4 went to post in this 1 mile trip around 1 turn of the muddy Belmont main track, with 2010 champion juvenile Uncle Mo sent off as the 3-5 favorite off his close second in the King's Bishop (G1) at Saratoga last out. In to challenge him were 5-2 second choice Jackson Bend, off wins in the James Marvin Stakes and Forego Stakes (G1) both at Saratoga, 3-1 third choice Jersey Town, second in both the Teddy Drone and the Forego, and 14-1 outsider Golddigger's Boy, 5th in the Forego.

Jockey John Velazquez sent Uncle Mo to the lead exiting the chute and he was allowed an uncontested lead of 2 lengths down the backstretch through fractiions of 23.47 and 46.03. On the turn, Jackson Bend moved alongside to challenge through 3/4 in 1:09.34, but Uncle Mo turned him away easily, drawing clear through the stretch to win by 3 lengths in 1:33.82 over the muddy, sealed main track. It was a long 8 lengths back to Jersey Town third. 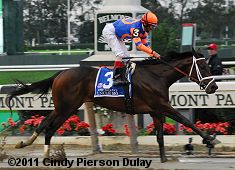 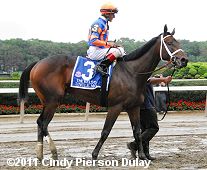 Left: Uncle Mo in the crowded winner's circle. Trainer Todd Pletcher said, "I would have been surprised if he didn't run really well. He had trained so brilliantly since the King's Bishop. He ran even better than I could have hoped. Jackson Bend put in a serious move around the turn. He was really running; in the form he's in, obviously, he's the horse you're mainly concerned about." 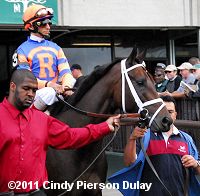 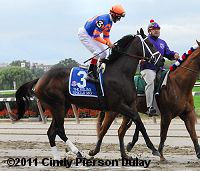 Left: heads out to the track before the race. His jockey John Velazquez said, "They told me to let him go and to leave him alone, so I just let him do whatever he wanted to do. I had plenty of horse, so when I asked him to run, he was there for me." 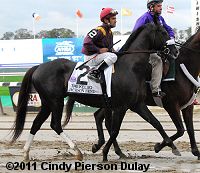 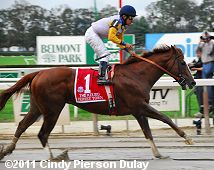 Left: Second place finisher Jackson Bend in the post parade. His trainer Nick Zito said, "Uncle Mo is a top horse. Johnny (Velazquez) came over a slight bit because he's so big. He couldn't get in there. Uncle Mo took his path. Jackson Bend came out and tried again. I'm just ecstatic. He ran great. I knew were were running against a top horse. Jackson left everything there. He proved how good he is. Now, we'll go onto the (Breeders' Cup Dirt) Mile race."