The $350,000 Beldame Invitational Stakes (G1) is the major New York prep for the Breeders' Cup Ladies' Classic (formerly the Distaff) contested at 1 1/8 miles around one turn of Belmont Park's main track. A short field of just 5 older fillies and mares went to post, with Havre de Grace sent off as the 2-5 favorite over her victory against males in the Woodward Stakes (G1) at Saratoga. In to challenge her included 2-1 second choice Royal Delta, winner of the Alabama Stakes (G1) last out, and 6-1 third choice Life at Ten, off her distant third place finish in the Delaware Handicap (G2).

Jockey John Velazquez sent Life at Ten to the lead exiting the chute and she set quick early fractions of 23.53, 46.41, and 1:10.69 over the muddy, sealed track while as many as 4 lengths in front of Havre de Grace and Royal Delta. On the turn, jockey Ramon Dominguez asked Havre de Grace for run and the favorite obliged, running right by the pacesetter at the 5/16 pole and opening up a 5 1/2 length lead in mid-stretch through 1 mile in 1:36.14. Royal Delta left the rest of the field behind her but was no match for Havre de Grace who finished up under wraps 8 1/4 lengths ahead in 1:49.39. It was a long 5 3/4 lengths from Royal Delta to 26-1 Satans Quick Chick third. 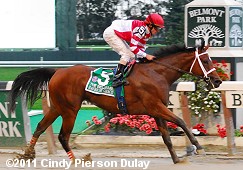 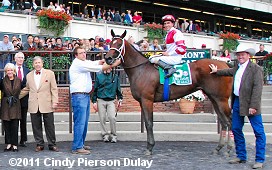 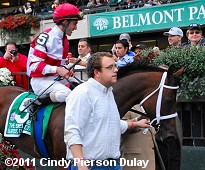 Left: Havre de Grace in the winner's circle with trainer Larry Jones at her hip. Jones said, "She had plenty in reserve. We didn't want to have to use 110 percent, but it was there if we needed it. I was a little concerned and had never seen her run over this type of track, but she responded. I don't think we had to ask for her best. She and I are still learning each other. I think we're starting to get there. We've got her fit now, and we don't have to put electrifying works in her. She's dead fit. I seriously think this is the closest I've ever witnessed the perfect race horse. I thought Secretariat was that when he retired. If she has a flaw anywhere, anyhow, I haven't found it. She has the speed to match up with (the Classic field). I'm sure we will see Uncle Mo in there." 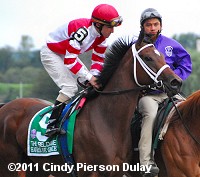 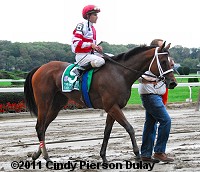 Left: Havre de Grace in the post parade. Her jockey Ramon Dominguez said, "It was very easy. She was in control the whole time, and turning for home I made sure I had her running. I got after her some, and when I took a peek back inside 3/16 she was in front by many, and she did it pretty easy. She's a special horse. Being a filly, it's like she's the underdog, so to speak. She's as good as the males, to me. Physically, the way she handled herself and her power, she's really a racehorse." 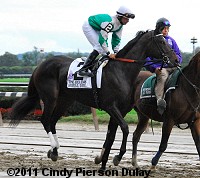 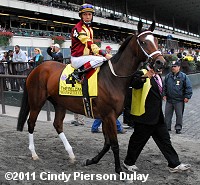 Left: Second place finisher Royal Delta in the post parade. Her trainer Bill Mott said, "She ran second to a very good filly. Havre de Grace is one of the top two fillies in the country. It's no disgrace to be beaten by her with a 3-year-old filly. I thought our filly ran well. I think the Breeders' Cup (Ladies Classic) is a possibility. We'll see."

Right: Third place finisher Satans Quick Chick heads out to the track before the race. The 26-1 shot was last 11 lengths back down the backstretch under regular jockey Edgar Prado, and passed two tiring horses late to get third beaten 14 lengths at the line. The Jeff Odintz trainee improved her record to 5 wins, 4 seconds, and 4 thirds in 20 starts, earning $436,890 for owner Jerry Jamgotchian.