The $500,000 Joe Hirsch Turf Classic Invitational (G1) is the major eastern prep for the Breeders' Cup Turf. A field of just 5 older horses contested this 1 1/2 mile trip over Belmont Park's Widener Turf Course, with Cape Blanco sent off as the 3-5 favorite off two straight wins, the Man o'War (G1) at Belmont and the Arlington Million (G1). In to challenge him included 2-1 second choice Winchester, winner of the Sword Dancer Invitational (G1) at Saratoga last out, and 8-1 third choice Grassy, off his win in the Bowling Green Handicap (G2) at Belmont.

Jockey Rajiv Maragh sent 12-1 Mission Approved to the lead first time past the stands and he set slow fractions of 25.52, 52.42, 1:19.37, and 1:44.92 while being pressed by favorite Cape Blanco just to his outside. On the far turn, Mission Approved tired allowing Cape Blanco to inherit the lead at the top of the lane through 1 1/4 miles in 2:09.80. 14-1 longest shot Dean's Kitten, who stalked the pacesetters in third the whole way, closed on the outside the length of the stretch but Cape Blanco held him off by a nose at the line, completing the trip in 2:36.61 over the yielding course. It was a long 8 3/4 lengths back to Grassy third. 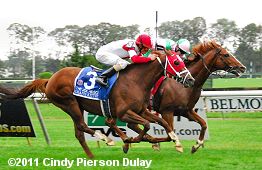 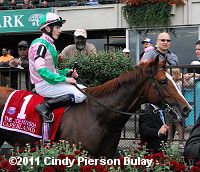 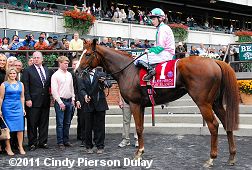 Right: Cape Blanco in the winner's circle. Charlie O'Connor, representing ownership group Coolmore said, "Very thrilling. I was a little bit nervous for a while. The ground was very soft, and it will just show you what a tough horse he is that he was still able to battle on and win. It was his third Grade 1 win over here, and it's fantastic." On Monday October 3, a slab fracture was discovered in his knee and he was retired from racing. Trainer Aidan O'Brien said, "Cape Blanco is an extremely talented and courageous horse with a tremendous attitude to his racing, so we will all be very sad to see him leave Ballydoyle. The fact that he never once changed leads in the home straight in spite of his injury just goes to prove what a brave horse he is." 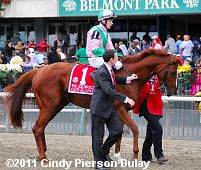 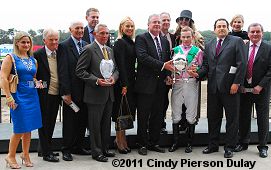 Left: Cape Blanco in the post parade. His jockey Jamie Spencer said, "He's a tenacious horse and tries very hard. The ground was very testing. It was sticky. His heart won it in the end. Whenever you ask him, he always finds more. I was glad to win, but the ground was totally against this horse. He wasn't handling the surface. This was also his first run in seven weeks. He's such a good horse with a big heart. That's why he won today. He needs room. He likes to get out and get galloping. He's got a big stride and he doesn't want his stride to get broken." 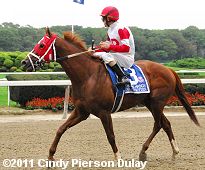 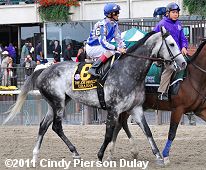 Left: Second place finisher Dean's Kitten heads out of the paddock. His trainer Mike Maker said, "He's just getting better and better. Obviously, he ran a great race in the Arlington Million, and ran a great race today. Maybe we'll get them at Churchill. We'll go on to the Breeders' Cup Turf." Jockey Ramon Dominguez added, "Turning for home, I tested the winner and just got unlucky on the head-bob. I thought I had a good chance to get up; I knew it was very close. The other horse was always running with his head very extended."

Right: Third place finisher Grassy in the paddock before the race. The 8-1 third choice sat fourth 3 lengths back under jockey John Velazquez, then passed the tiring pacesetter late to get third beaten 8 3/4 lengths. The Christophe Clement trainee improved his record to 5 wins, 3 seconds, and 3 thirds in 16 starts, earning $465,564 for owner-breeders Adele Dilschneider and Claiborne Farm.