A field of 6 older fillies and mares contested the $500,000 Flower Bowl Invitational Stakes (G1) at Belmont Park, a major prep for the Breeders' Cup Filly and Mare Turf. Stacelita was sent off as the 1-2 favorite in this 1 1/4 mile inner turf race off her win in the Beverly D (G1) at Arlington Park last out. In to challenge her included 7-2 second choice Deluxe, second in the Paris Opera Stakes at Saratoga, and 6-1 third choice Emerald Beech, off her win in the the Glens Falls (G3) at Saratoga.

Jockey Corey Nakatani sent 7-1 fourth choice Dynaslew to the lead first time past the stands and she set slow early fractions of 26.09, 53.48, 1:20.87, and 1:46.26 over the yielding going, while pressed by Deluxe a length and a half behind in second. Entering the stretch, Stacelita, who was 5th down the backstretch, passed the tiring pacesetter at the 3/16 pole and opened up a 2 1/2 length lead at the 1/8 pole. 42-1 longest shot Distorted Legacy, who stalked the pace in third early, attemped to close but was no match for Stacelita who cruised under the line 2 lengths clear in 2:10.39. It was another 1 3/4 lengths back to pacesetter Dynaslew third. 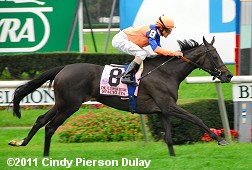 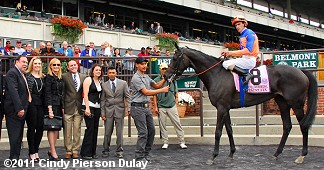 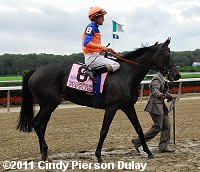 Left: Stacelita in the winner's circle. Her trainer Chad Brown said, "Ramon finds a way to work out a trip under adverse circumstances. I was feeling pretty good down the backside when I saw how much horse he had, and when he ranged up to the leaders in hand, obviously, I felt good. I thought, all in all, it was a great, patient ride by Ramon. She is a remarkable horse and she's had an outstanding career to this point. Hopefully she can cap it off with a win in the Breeders' Cup. Most likely we will stay here until the week of the Breeders' Cup and do all her training here."

Right: Stacelita returns after the race. 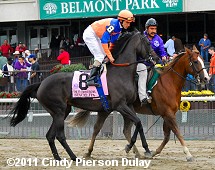 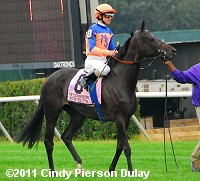 Left: Stacelita in the post parade. Her jockey Ramon Dominguez said, "I wasn't happy about being wide, but I was very pleased with the way she was handling herself. When she saw the light, she wanted to run. She felt like she was playing with those fillies. She was just really in control. Once she got to the backside and I tucked behind (Gitchee Goomie), I felt like she would have a pretty good kick, and she did."

Right: Stacelita behind the starting gate. 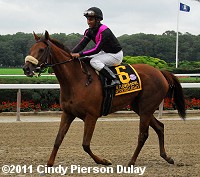 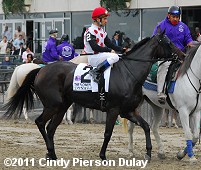 Left: Second place finisher Distorted Legacy returns after the race. Trainer Angel Penna Jr. said, "Every time you run well, you're happy. It was a Grade 1, and I probably got beat by the best filly in the country on the grass. I'm really happy and not surprised by any means. This filly is a good filly on the grass. With the way she runs, when the pace is a little fast she's so far back. To come from behind in those races is practically impossible. Now, today, because the pace was slower, she was a little closer. She keeps going, and she's a decent filly. I'm very happy today. I feel like I won it."

Right: Third place finisher Dynaslew in the post parade. The 7-1 fourth choice led for the first mile under new jockey Corey Nakatani, then tired in the stretch to finish third beaten 3 3/4 lengths. The Seth Benzel trainee improved her record to 5 wins, 5 seconds, and 1 third in 19 starts, earning $441,327 for owner-breeder Live Oak Plantation.