The $350,000 Vosburgh Stakes (G1) is the major eastern prep for the Breeders' Cup Sprint. A field of 8 older horses contested this 6 furlong main track event, with Trappe Shot sent off as the even-money choice off his close second in the A.G. Vanderbilt (G1) at Saratoga after winning the True North Handicap (G2) at Belmont. In to challenge him included 2-1 second choice Euroears, winner of the Bing Crosby (G1) at Del Mar last out, and 7-1 third choice Force Freeze, off his win in the Teddy Drone Stakes at Monmouth Park.

Jockey Cornelio Velasquez sent 12-1 Giant Ryan immediately to the lead and he set quick fractions of 22.10 and 44.36 over the muddy track while being stalked by Force Freeze the whole way. Giant Ryan led the field into the lane, still holding on to a 1 1/2 length advantage at the furlong marker through 5/8 in 56.28. Force Freeze attemped to close on the pacesetter but Giant Ryan easily held him off by 1/2 a length to win in 1:09.10. It was another 1 1/2 lengths back to late-running 11-1 Caixa Eletronica third, while favorite Trappe Shot finished another 1/2 length back in fourth. 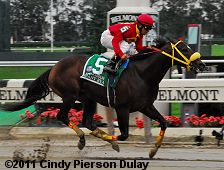 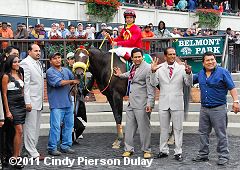 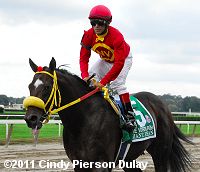 Left: Giant Ryan in the winner's circle. Trainer Bisnath Parboo said, "He not only was 2-for-2 on the wet track. He is 2-for-2 in 2011 at Belmont. 2-for-2 at Calder. He was already qualified for the Breeders' Cup 'Win and You're In' with the Smile. This is the 8th race for the year. He needed a break after the Smile."

Right: Giant Ryan returns after the race. Owner Shivananda Parbhoo added, "If he couldn't lead, he'd sit second. This is his home track. He loves Belmont Park. I will keep him here for a week or 2 and then he will ship directly to Churchill Downs. He will leave 3 weeks before the Breeders' Cup. This was to see if he could compete with the best horses." 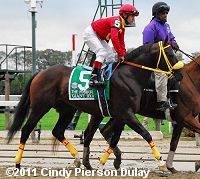 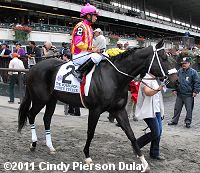 Left: Giant Ryan in the post parade. His jockey Cornelio Velasquez said, "My horse likes the sloppy track. He broke fast and wanted to go to the lead. I had a lot of horse at the top of the stretch. It's been a long time since he ran but he tries hard every time. I've had a lot of luck with him (5-for-5)."

Right: Second place finisher Force Freeze returns after the race. His trainer Peter Walder said, "He ran a monstrous race. Paco (Lopez) said if he liked the track a little bit, he thinks he would have caught (Giant Ryan). Other than winning, I couldn't be happier. I just can't win a race here. The last 3 horses that I ran finished second. There's no reason why he shouldn't be (in the Breeders' Cup Sprint). He deserves a chance. This was the toughest field he had all year. He proved he belonged here." 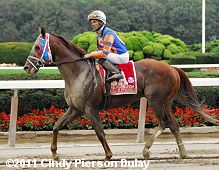 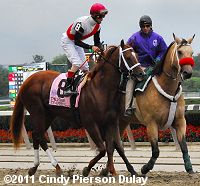 Right: Beaten favorite and fourth place finisher Trappe Shot in the post parade. His trainer Kiaran McLaughlin said, "We got squeezed a little bit at the break. Basically, (John Velazquez) said they weren't coming back. Speed held up. He didn't run that bad. When you're even money, it's disappointing. It seems like it's always something with the track or this or that. The same thing happened last time. It's just tough. He's such a good horse. It's a shame. We'll regroup and figure out what to do from here."