The first graded stakes on the Saturday card was the $500,000 Diana Stakes (G1) featuring a field of 9 older fillies and mares going 1 1/8 miles over the Mellon turf course. Unbridled Humor, undefeated in 4 career starts, was sent off as the 2-1 favorite off an allowance win at Delaware last out. In to challenge her included 3-1 second choice Aruna, winner of the All Along (G3) at Colonial and the Diatff Turf Mile (G2) at Churchill, and 5-1 third choice Aviate, 6th in the Just a Game (G1) at Belmont after winning the Distaff Turf Mile.

Jockey John Velazquez sent Unbridled Humor to the lead first time past the stands and she set easy fractions of 25.20, 50.31, and 1:14.02 over the good turf, while being pressed by 7-1 Bay to Bay a length behind. At the top of the stretch, 6-1 Zagora, who was 5th early, came out 4 wide to challenge for the lead, passing the favorite at the 1/8 pole through 1 mile in 1:37.52. Aruna, 8th early, put in a strong late rally but Zagora easily drew clear to win by 1 1/2 lengths in 1:49.19. It was just a neck back to Bay to Bay third, while favorite and pacesetter Unbridled Humor tired badly to finish 7th. 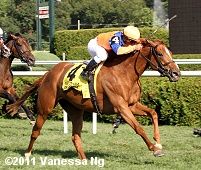 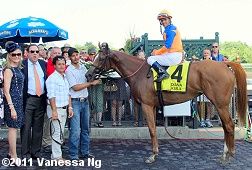 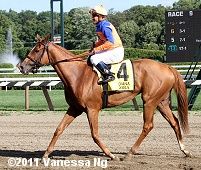 Left: Zagora in the winner's circle. Her trainer Chad Brown, celebrating his first Grade 1 winner, said, "Javier watched all her races and we had a plan going in. Plan A was to be laying third in the pocket, but Plan B was, if she didn't really didn't want to be involved, don't push her off the bridle. Just let her settle, and he did that. I thought he saved ground nicely, and instead of moving on the last turn, he waited until he straightened away. Saratoga has been good to me. We point for this meet every year, and we're going to continue to."

Right: Zagora returns after the race. 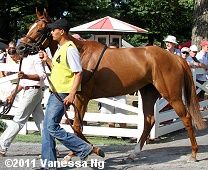 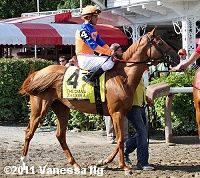 Left: Zagora in the paddock before the race. Her jockey Javier Castellano said, "I had a beautiful trip. She broke a little bit slow, but I tried to rush a little bit, put her in the game and on the first turn, I got my position and that's where I wanted to be. I saved all the ground in the first turn and turning for home I saw horses start backing up a little bit. I went around the two front-running horses and when I asked her, it was unbelievable. She's a really small filly, but she's got good heart. When I asked her she took off and she gave me a good kick." 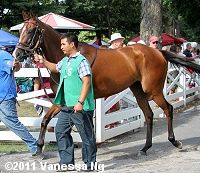 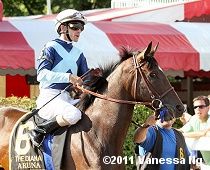 Left: Second place finsher Aruna heads out for the post parade. Her jockey Ramon Dominguez said, "My trip was good. It was just a slow pace in front of us. I'm not sure if it got her beat or not because everybody was running at the same pace late, but it wasn't the ideal pace, that's for sure. I'm very happy with the effort, though."

Right: Third place finisher Bay to Bay in the paddock before the race. The 7-1 shot stalked the pace second under jockey Alan Garcia, but could not improve late finishing 3rd beaten 1 3/4 lengths. The Roger Attfield trainee improved her record to 4 wins, 5 seconds, and 2 thirds in 13 starts, earning $641,161 for owner Robert Smithen.


The $500,000 Jim Dandy Stakes (G2) is the major local prep for the Travers (G1) to be run 4 weeks later. A field of 7 three-year-olds contested this 1 1/8 mile main track test, with Dominus sent off as the 9-5 favorite off his win in the Dwyer (G2) at Belmont. In to challenge him included 5-2 second choice Stay Thirsty, a close second in the Belmont Stakes (G1) last out, and 7-2 third choice Alternation, off a victory in the Peter Pan (G2).

Jockey Robby Albarado sent 18-1 Will's Wildcat to the lead first time past the stands and set early fractions of 24.00 and 47.66 over the fast track while being stalked by Dominus a length behind. Down the backstretch, Dominus took over the lead getting 3/4 in 1:11.39, but on the turn, Stay Thirsty, 4th early, came out for room and took over the lead at the 3/16 pole getting the mile in 1:35.81. 37-1 longest shot Moonshine Mullin put in a strong late move through the lane but Stay Thirsy was long gone, cruising under the line 4 lengths in front in 1:48.78. It was another 1 3/4 lengths back to favorite Dominus third. 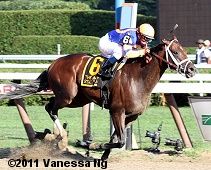 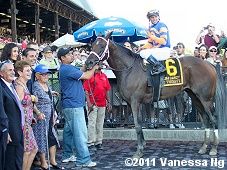 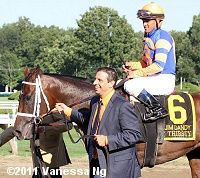 Right: Owner Mike Repole leads Stay Thirsty to the winner's circle. Repole said, "This horse just ran a special race today. I've been telling most of you guys that this is going to be a second-half 3-year-old and he'll be better at 4 than he is at 3. And I think that's what you saw today - a horse that's just getting better and better and better. He was training really good in Kentucky, but just didn't run the race Todd and I thought. He did it in the Belmont, now he's done it today, and if everything goes right, he'll be in the Travers." 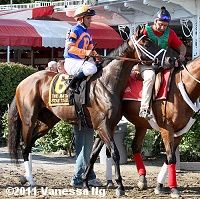 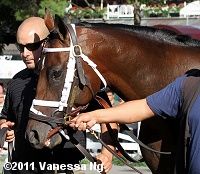 Left: Stay Thirsty heads out for the post parade. His trainer Todd Pletcher said, "We got a perfect trip. He let him find his rhythm down the backside and kept turning up the pressure as he went along. It was a great day. It was a breakthrough effort for Stay Thirsty; he's kind of been living in the shadows of his stablemate, Uncle Mo, all along. We always felt as if he had a performance like this in him, and it's a great place to do it here at Saratoga. I think he has established himself as one of the leaders in the division. The way he was training heading into this, we felt very optimistic."

Right: Stay Thirsty in the paddock before the race. 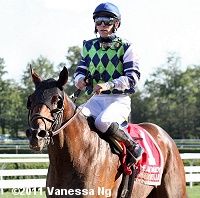 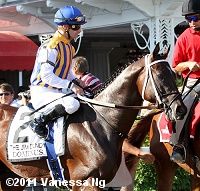 Left: Second place finisher Moonshine Mullin returns after the race. His jockey Emma-Jayne Wilson said, "I'm extremely happy with his race. My trip was as expected. There were a couple others with some pace on paper, and we were able to settle in tight behind them for a perfect stalking trip. When I was able to get him to the outside off the turn, he made a good run at them. He ran excellent."

Right: Third place finisher and beaten favorite Dominus heads out for the post parade. His jockey Julien Leparoux said, "He settled in nice and we got a great trip, and then (Moonshine Mullin) came by and passed me and that was it."


Kicking off the stakes action was the $80,000 Hattie Moseley Stakes for 3-year-old fillies going 1 mile on the inner turf course. 32-1 longest shot Japanese Garden battled for the lead with 22-1 Tapit Dancer through easy fractions of 24.92, 50.07, and 1:14.37, while being stalked by 10-1 Niji's Grand Girl. Entering the stretch, Japanese Garden tired allowing Tapit Dancer to inherit a short lead, but the pace duel set the race up for the closers. 18-1 My Redbyrd, 8th early, closed late to get up by 3/4 length over 3-1 second choice Ruthenia in 1:37.90. It was another 1/2 length back to 2-1 favorite Starformer third. 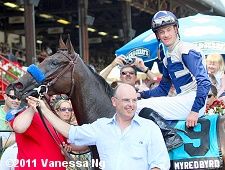 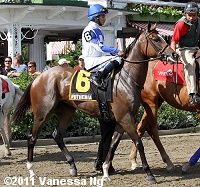 Left: My Redbyrd in the winner's circle. The John Terranova trainee has a record of 3 wins, 1 second, and 2 thirds in 8 starts, earning $97,603 for owner Newtown Anner Stud.

Right: Second place finisher Ruthenia heads out for the post parade. She is a full sister to Grade 1 winner Rutherienne.