The $1 million Travers Stakes (G1) is the highlight of the Saratoga meeting. The 142nd edition of the "Midsummer Derby" features the best 3-year-olds of the east going 1 1/4 miles over the historic oval in Saratoga Springs. Clouds rolled in during the day, with the feature run under overcast skies with temperatures in the low 80's before 43,050 fans in attendance. As expected, Stay Thirsty was sent off as the 5-2 favorite in the field of 10, off his win in the Jim Dandy Stakes (G2) after finishing a close second in the Belmont Stakes (G1). In to challenge him included 3-1 second choice Coil, winner of the Haskell Invitational (G1) last out after finishing second in the Swaps (G2), and 7-2 third choice Shackleford, winner of the Preakness (G1) 3 starts back but coming to Saratoga off a close second in the Haskell (G1).

Jockey Jesus Castanon sent Shackleford to the lead on the clubhouse turn and he set fractions of 47.63, and 1:11.91 over the fast track while being pressed by Stay Thirsty a length back and to his inside. On the far turn, Stay Thirsty passed the tiring Shackleford, taking the lead at the 1/4 pole through 1 mile in 1:36.74. 14-1 Rattlesnake Bridge, 6th early, came out wide for the drive and rallied well but was left with too much ground to make up as Stay Thirsty cruised under the line 1 1/4 lengths in front in a time of 2:03.03. It was another 1 1/2 lengths back to 33-1 J W Blue third. 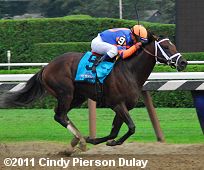 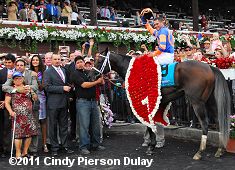 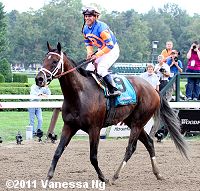 Left: Stay Thirsty in the winner's circle. Pletcher said, "The first turn was a little more complicated than we expected. He broke really well and we thought Shackleford might take a little more initiative than he did, and we kind of got jammed up in between horses. Finally, Javier got him back off the pace to where we wanted, stalking Shackleford, and as soon as we did that another wave of horses came. I thought it was a huge effort, considering he ran every step of the 1 1/4 miles. At the 1/8 pole, I could see he was finding more and I could see Rattlesnake Bridge revving up. I wasn't counting on anything until they got to the wire, but I felt pretty good at the 1/16 pole."

Right: Stake Thirsty returns after the race. Owner Mike Repole said, "Stay Thirsty separates himself from every 3-year-old by far right now. He should have won the Belmont, but he didn't. He recovered in the Jim Dandy. He ran great, Javier rode him great. There's no doubt in my mind he's the best 3-year-old in the country. The other three horses you could say were the best 3-year-olds in the country were in this race. To me, he won the 3-year-old championship right here, unless somebody steps up and wins the (Breeders' Cup) Classic." 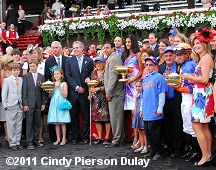 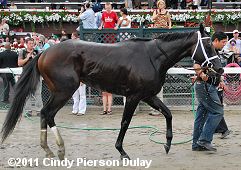 Left: The trophy presentation for the Travers.

Right: Stay Thirsty heads back to the barn. Trainer Todd Pletcher said, "The Jockey Club Gold Cup is the plan that we had coming into this. We need to see how he comes out of the race, and make sure that we want to have a start between now and the Breeders' Cup Classic, but he's in such a good rhythm right now, and he's doing so well that if he continues to progress the way he is, I think the Gold Cup fits." 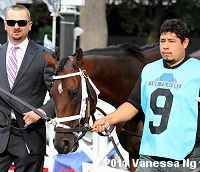 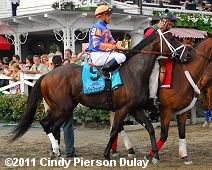 Left: Stay Thirsty in the paddock before the race.

Right: Stay Thirsty heads out to the track for the post parade. His jockey Javier Castellano said, "I didn't expect to be on the lead, but the way the race unfolded and the way my horse beat the gate, I ended up on the first turn about a 1/2 length in front of the rest of the field. I realized I needed to settle down my horse. I didn't know who was going to be the speed, but it worked out great because (Stay Thirsty) came back to me on the backside and I was able to settle him down. I was able to put him outside. I think that was the key to winning the race. I had a lot of horse. At some point, he was going to respond to me. He showed he's the best 3-year-old in the country and I'm so happy with the way he did it. He's like his father (2006 winner Bernardini). I am very lucky to able to ride his son. It means a lot to me (to win back-to-back Travers). I am so excited and happy because it's not easy to win races at Saratoga, especially races like the Travers. I am very lucky, blessed, and thankful." 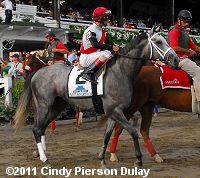 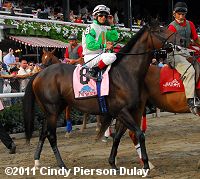 Left: Second place finisher Rattlesnake Bridge heads out to the track before the race. His trainer Kiaran McLaughlin said, "We ran great. We were second best; congratulations to the winner. We were pointing toward this race, we ran our race, and we were second-best." Jockey John Velazquez added, "Perfect trip and the other horse kept running. I grabbed him from the gate and took him back. I got up my position, and I was watching Javier. The horses were bumping. He was running as good as he could and couldn't get to (Stay Thirsty). No chance."

Right: Third place finisher J W Blue heads out to the track before the race. His trainer Tony Dutrow said, "Obviously we're very happy our horse ran very well in the Travers. However, our horse is still not realizing his full potential, and that's frustrating." Jockey Cornelio Velasquez added, "He was too green. He walked out of the gate. I had a good trip, he broke a little slow, but I like the horse. He's a nice horse. The distance doesn't matter."

The sprinting counterpart to the Travers is the $250,000 Foxwoods King's Bishop Stakes (G1) for 3-year-olds going 7 furlongs on the main track. Uncle Mo made his long-awaited comeback, and was sent off as the 6-5 favorite off his third place finish in the Wood Memorial (G1) in April. In to challenge him included 5-2 second choice Flashpoint, winner of the Jersey Shore (G3) last out, and 6-1 third choice Caleb's Posse, off his win in the Amsterdam (G2).

13-1 Runflatout and Flashpoint battled for the lead exiting the chute and set quick fractions of 22.23 and 44.92, while being stalked by 17-1 Poseidon's Warrior third. Uncle Mo sat just behind the lead trio in fourth, on the outside. Into the stretch, the pacesetters tired as Uncle Mo easily took over the lead and opened up a 1 1/2 length advantage at the 1/8 pole through 6f in 1:09.21. Caleb's Posse, who was last early, closed late to defeat Uncle Mo in a photo finish in 1:21.59. It was another 2 1/2 lengths back to late-running 24-1 Justin Phillip third. 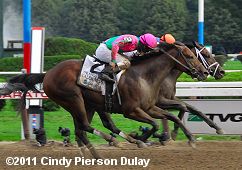 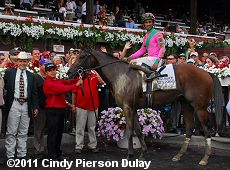 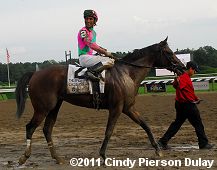 Left: Caleb's Posse in the winner's circle with trainer Donnie Von Hemel on the far left. Von Hemel said, "We were hopeful a speed duel would develop in front so we'd have a chance. Rajiv the ultimate patience, waiting. He swung out turning for home, and you could see he was going to make his run. Boy, it was just thrilling - for me, anyway - all the way down to the last jump. Uncle Mo is certainly the class of the field as a 2-year-old champion and a great horse, by all accounts. We're just proud to be in the same race and we're just thrilled to death for Mr. McNeill and Mr. Dobson. He's outperformed his pedigree, every jump of the way." 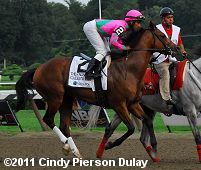 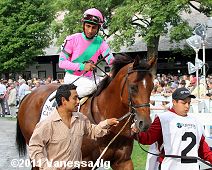 Left: Caleb's Posse in the paddock before the race. His jockey Rajiv Maragh said, "My horse is a closer. He broke well, but he wanted to settle back a little bit. I tried to time my run right, and I was fortunate to get up in time. It was close. I felt like I got it, but you never know, you never can tell. He's a good horse, he makes me look good. I think the thing is just letting him find his stride, just finish strong and let him get the chance to run his race. He comes with a strong kick." 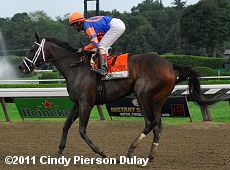 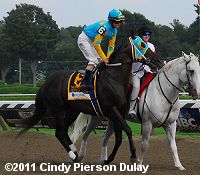 Left: Second place finisher and beaten favorite Uncle Mo returns after the race. His owner Mike Repole said, "Listen, I want to win. I think the horse ran great. He came off a liver disease and to lose like that, to come back from a 5 month layoff and to beat the speed bias the way he did, by the way - he just came up short." Jockey John Velazquez added, "He ran awesome. It was a tough task to ask him off the bench. I thought he ran a great race, just barely made it. I'm just glad to have him back. He was fighting the whole way around. That's what I like about him."

Right: Third place finisher Justin Phillip in the post parade. The 34-1 longest shot sat 6th about 6 lengths off the pace under jockey Ramon Dominguez, then rallied the final 3/16 to get third beaten 2 1/2 lengths. The Steve Asmussen trainee improved his record to 3 wins, 1 second, and 5 thirds in 12 starts, earning $294,028 for owner Zayat Stables.