The $6 million DP World Dubai Turf (G1) is an 1800-meter (about 1 1/8 mile) trip around one turn of the turf course at Meydan Racecourse. A field of 13 older horses went to post, with Japan's Filly Triple Crown winner Almond Eye sent off as the 4-5 favorite, winner of 6 in a row including the Shuka Sho (G1) and the Japan Cup (G1). In to challenge her included 5-2 second choice Dream Castle, winner of the Singspiel (G3), Al Rashidiya (G2) and the Jebel Hatta (G1), completing a sweep of the local preps for this race, and 8-1 third choice I Can Fly, 2nd in the Queen Elizabeth II (G1) but 12th in the Breeders' Cup Mile (G1). 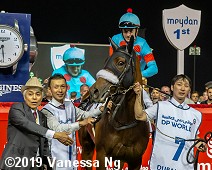 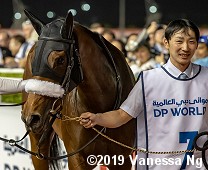 Left: Almond Eye in the winner's enclosure. Winning trainer Sakae Kunieda said, "It was a really great race. She broke well, settled well, got a good position and accelerated well to win well. It was the result I thought we could get and I'm happy she proved us right. I was nervous, I've lost my voice. Almond Eye can continue my dreams, so next we'll go to Europe, our dream is to take her to the Arc."

Right: Almond Eye heads back to the barn after the race. 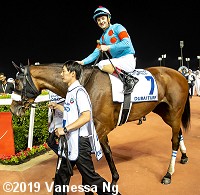 Right: The trophy presentation for the Dubai Turf with trainer Sakae Kunieda in the white hat. 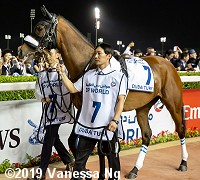 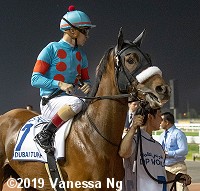 Left: Almond Eye in the walking ring. Winning jockey Christophe Lemaire said, "She was very impressive. The way she accelerated is unbelievable. Today was her first start of the year, and quite early on she was actually in front of the rest of the field. I think she relaxed a little bit and she had a bit of a margin on them. The distance was a little bit short for her today but she is so good that I had no fear about that. When you have the right horse and you have confidence in your horse, you can go out confident no matter what happens - and she's the right horse. Hopefully, there are some big victories on the horizon for her."

Right: Almond Eye heads out to the track. 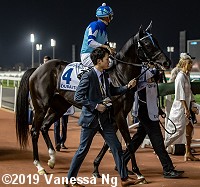 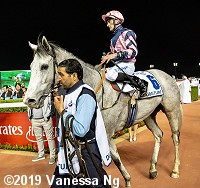 Left: Second place finisher Vivlos heads out to the track before the race. Jockey Mickael Barzalona said, "She has shown again that she loves Dubai and this race especially. She won it two years ago and now she has finished second twice. She met a better filly in Almond Eye, but Vivlos fought very hard for me to the end. Also I want to say well done to the connections because they were thinking about retiring her, but they wanted to try here once again as they know she likes Meydan so much."

Right: Third place finisher Lord Glitters returns after the race. Trainer David O'Meara said, "We were delighted with that run tonight. I thought it was a fantastic effort. Obviously, (Almond Eye) and Vivlos had won and placed in this race before and they bring a very high level of form here. We've beaten the rest of them very well. The plan was just to hold him up and get him to settle. Sometimes he can be a bit keen in his races and we had an idea we might end up behind her. It wasn't the plan to follow her, but I thought Danny (Tudhope) gave the horse a lovely ride and we had every chance. We were just beaten by two horses that were better than us on the day."