The world's richest race meeting highlighted by the $10 million Dubai World Cup (G1), will be conducted at Meydan Racecourse in Dubai on Saturday. On Wednesday afternoon the post positions were drawn for the main event, which features some of the best older horses in the world going 2000 meters (about 1 1/4 miles), two turns of the 1 1/8 mile dirt track. Post positions for the big race and the undercard races are available below. An online racecard is available from Dubai Racing Club where you can click on each horse's name to get a form summary.

As expected, Travers (G1), Breeders' Cup Classic (G1), and Pegasus World Cup (G1) winner Arrogate is the current favorite in the field of 14 at 4-11 (SkyBet at time of writing). Regular rider Mike Smith will be in the irons in post 9 aboard the current "World's Best Racehorse" for trainer Bob Baffert and owner Juddmonte Farm. In to challenge him include 13-2 second choice Gun Runner in post 5. He comes to Meydan off wins in the Clark Handicap (G1) at Churchill and then the Razorback Handicap (G3) at Oaklawn. Florent Geroux gets the call Saturday night for trainer Steve Asmussen. Hard luck horse Mubtaahij is the 11-1 third choice, winless since taking the UAE Derby back in 2015, and second in the Curlin Handicap at Meydan on February 23. Christophe Soumillon rides for trainer Mike de Kock out of the outside post 14.

Bob Baffert, after drawing 9 and jokingly trying to show it as 6, said of Arrogate, "You need racing luck—he has to break well and everything has to go right. This will be his toughest test. But he’s a big strong horse, and if he shows up and runs his race, he wins it." Baffert also has Hoppertunity from post 12, adding, "They are lucky colours. He couldn't be any better. He shipped well, he always get a piece of it and we hope one day he gets the whole enchilada. It's good for him. He likes to be out in the clear and then he'll come running." Gun Runner's owner Ron Winchell said, "His last run set us up well for where we are today. He's shipped well." Scott Blasi, assistant to trainer Steve Asmussen added, "We're very happy with it. If we could have picked one it would have been the five or six so we're happy." Trevor Brown, assistant to trainer Mike de Kock said of Mubtaahij's outside post, "What can we do? We're very happy with his progress since his last race. You have to take what you get."

The undercard features the two richest turf races in the world, the 2410 meter (about 1 1/2 mile) Sheema Classic (G1) and the 1800 meter (about 1 1/8 mile) Dubai Turf (G1), worth $6 million each. In the Sheema Classic, carded immediately before the main event, Postponed (post 7), Highland Reel (3), and Jack Hobbs (2) are expected to be favored in the betting, while Zarak (2) and Ribchester (1) are expected to go off at short odds in the Turf. Note that defending Turf champion Real Steel was scratched and did not make final entry. Top dirt sprinters go 1200 meters (6 furlongs) in the $2 million Dubai Golden Shaheen (G1), including Mind Your Biscuits and St. Joe Bay. The $1 million Al Quoz Sprint (G1) features turf sprinters going 1200 meters (6 furlongs) on the straightaway, a furlong longer than it had originally been run.

Along with the four Group 1 events, there are 2 Group 2 events and a Group 3 race carded. The $2 million UAE Derby (G2) features northern hemisphere 3-year-olds and southern hemisphere 4-year-olds going 1900 meters (1 3/16 miles) on the main Tapeta, worth 100 points to the winner as part of the Kentucky Derby Championship Series (although 4-year-olds do not qualify), with Thunder Snow and Epicharis expected to be favoried. The night starts off with the $1 million Godolphin Mile (G2) at 1600 meters (1 mile) on dirt followed by the $1 million Dubai Kahayla Classic (G1) for purebred Arabians, and the $1 million Dubai Gold Cup (G3) at 3200 meters (2 miles) on turf. Note that this is a change from past years, with the Mile and Kahayla switching places on the card.

The saddlecloth numbers correspond to post positions barring any late scratches. The World Cup goes off at 12:45PM (all times Eastern), while the first race the $1 million Godolphin Mile (G2) off at 7:45AM. The table to the right has all the post times.

Since betting is illegal in the UAE, the international wagering hub is located in South Africa and their rules apply. Win, exacta, trifecta, superfecta, daily double (Sheema Classic and World Cup), and rolling Pick 3 wagering are the same as the American versions, however, there is no show pool but bets to place pay to third place, like a show bet normally would. Since Dubai won't do odds, the morning line odds shown below are from SkyBet at time of writing.

The races will be shown live on TVG in the U.S. and HPI-TV in Canada, as well as at racetracks and simulcast sites. In addition, for the first time NBC Sports Network will show the four Group 1 races in a special telecast starting at 10:30am ET.

Below are the entries and post positions for the Dubai World Cup. All entrants carry 57 kg (126 lb) except mare Furia Cruzada who carries 55 kg (121 lb). 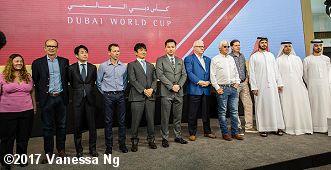 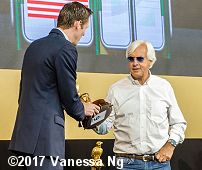 Right: Bob Baffert draws post 9 for Arrogate. He said, "Nine is fine. The main thing for him is to get away then it's up to Mike Smith to decide. I just didn't want to be number 14 or on the inside otherwise it really didn't matter. I know I have a great horse. If he just repeats his last race we'll be in good shape." 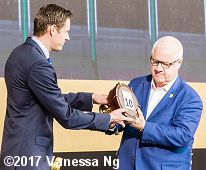 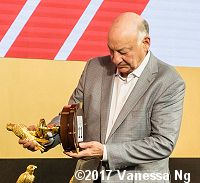 Left: Jack Wolf of Starlight Racing selects post 11 for Neolithic. Wolf said, "Lucky 11! The horse looked very good on the track this morning. It's so far so good." "I was told that posts three through eight are where you want to be, but I can't complain about (11). Keen Ice is directly inside and he likely won't be quick away from there. Directly inside him is Arrogate, so we will know where he is immediately."

Right: Jerry Crawford of Donegal Racing draws post 10 for Keen Ice. Crawford said, "He does his best running late from the gates so the draw doesn't make much difference. I was hoping for about the 7 or 8 and I got the 10. It was interesting where the other horses ended up, and I think it works out well for us. There's a lot of speed near us so I think Javier [Castellano, jockey] will have a lot of choices. If he's close enough when they turn for home he's going to be tough to deal with for everyone, except maybe Arrogate."

The draw board for the 2017 Dubai World Cup. Erwan Charpy, trainer of Furia Cruzada (post 8), the only distaffer in the field, said, "It's my first runner and it's exciting to be here. We've got speed inside and outside and I'm happy enough with midfield. She's adaptable. Realistically she's an outsider but she'll run to her best."

The draw was held in the Sky Bubble at Meydan which has a wonderful view over the walking ring with downtown in the distance with the Burj Khalifa, the world's tallest skyscraper, in the center.