The 35th Breeders' Cup World Championships kicked off on Friday at Churchill Downs in Louisville, Kentucky with the new "Future Stars Friday" format, with all the 2-year-old races including the new Juvenile Turf Sprint all on the first day. Conditions were typical for early November, with the 42,249 fans braving temperatures in the low 50's and mostly dark overcast skies with the main track "fast" and the Matt Winn Turf Course rated yielding despite being soaked with rain over the last two days.

Winning jockey Joel Rosario said, "He broke fine but it looked like they took my spot and I had to go wide. He seemed like he didn't mind that. He was comfortable. That's why we got him moving at that point, instead of getting inside and taking back. Turning for home the more I rode him the more he gave it to me." 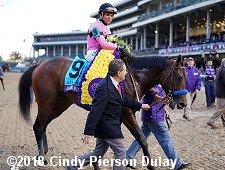 The $1 million Breeders' Cup Juvenile Turf (G1) featured a full field of 14 2-year-olds going 1 mile on the turf. Vincent O'Brien National Stakes (G2) runner-up and Dewhurst Stakes (G1) third place finisher Anthony Van Dyck was sent off as the 3-1 favorite over 7-2 Line of Duty and 6-1 Forty Under. 15-1 Somelikeithotbrown set the pace of 24.40, 48.46, and 1:13.60 while pressed by Forty Under and stalked by 34-1 Arthur Kitt. Somelikeithotbrown led to the 1/8 pole through 7f in 1:26.58 but Line of Duty, 6th early under William Buick, rallied on the outside but bumped into eventual runner-up 8-1 Uncle Benny at the 1/16 pole, outfinishing him by 1/2 length in 1:40.06. It was a neck back to Somelikeithotbrown third. Jockey Irad Ortiz Jr. aboard Uncle Benny claimed foul against William Buick aboard Line of Duty but the result stood after a lengthy inquiry.

Winning trainer Charlie Appleby said, "It's lovely to be here. William (Buick) gave him a great ride. He managed to get him wide and come with a clear run. It's great for the team and especially Sheikh Mohammed." Jockey William Buick added, "Obviously, I am relieved that we have kept the race. He has put up a great performance to go on and win." 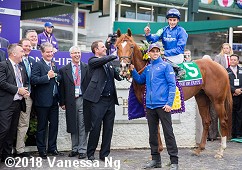 The $2 million Tito's Handmade Vodka Breeders' Cup Juvenile Fillies (G1) features the best 2-year-old fillies going 1 1/16 miles on the main track. Del Mar Debutante (G1) and Chandelier (G1) winner Bellafina was the 2-1 favorite over 3-1 Restless Rider and 4-1 Serengeti Empress. Jockey Joel Rosario sent 11-2 fourth choice Jaywalk to the lead first time by through fractions of 23.23, 46.76, and 1:11.48 while pressed by Serengeti Empress and stalked by Bellafina. Entering the lane Jaywalk opened up a 2 length lead through 1 mile in 1:37.02. Restless Rider put in a strong rally to no avail as Jaywalk cruised to a 5 1/2 length win in 1:43.62. It was 1/2 a length back to 35-1 Vibrance third, and 3 1/4 more to favorite Bellafina fourth.

Winning trainer John Servis said, "I didn't expect for her to go to the lead again. I really thought there was enough speed in here that she'd probably be sitting off it a bit. But, Joel (Rosario) said when she left the gate, he knew right then she had running on her mind. And, he just took it from there. Once she got the front, she started flicking her ears and looked nice and relaxed." 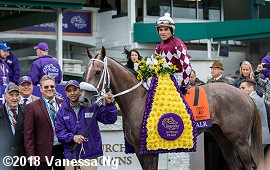 Winning owner Seth Klarman of Klaravich Stables said, "We've never won a Breeders' Cup race, so that's special. I think she's our most spectacular horse. We've never had somebody that emerged so quickly in her career, showed so much promise, and has fulfilled it." 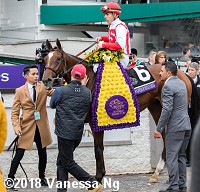 Kicking off the World Championships, the inaugural $1 million Breeders' Cup Juvenile Turf Sprint featured 12 two-year-olds going 5 1/2 furlongs around one turn of the turf. Flying Childers Stakes (G2) winner and Prix de l'Abbaye (G1) third place finisher Soldier's Call was the 5-2 favorite over 4-1 Bulletin and 5-1 Sergei Prokofiev. Jockey Javier Castellano hustled Bulletin to the lead through fractions of 23.19 and 46.89 while pressed by 25-1 Chelsea Cloisters and stalked by Soldier's Call. Bulletin continued to lead in the stretch through 5f in 59.01 and drew off to win by 2 3/4 lengths over Chelsea Cloisters in 1:05.54. It was another length back to 10-1 So Perfect third, whilc Soldier's Call checked in 6th.

Winning trainer Todd Pletcher said, "Fantastic way to start. He broke really well and was sharp.He took it to them the whole way. It was a big race. We wanted to leave there running. He finished up nicely. Nothing like winning one." Castellano added, "He broke like a shot and put me in a real great position. We were in good shape the whole way. I'm very impressed. He was very professional." 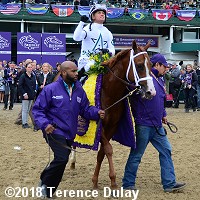 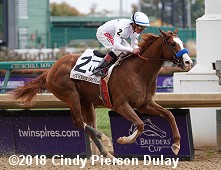 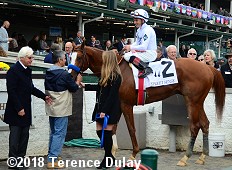 Jimmy Barnes, assistant to winning trainer Bob Baffert said, "I think he's a pretty exciting horse. He showed some talent in his debut and trained really well out in California. Hopefully this kick starts a fun weekend." Van Dyke added, "I knew I'd be just behind some of the early pace setters. I tracked the one that I thought was the better and when the hole opened up right after we passed the Big Board I moved him outside. He was very professional throughout the entire race." 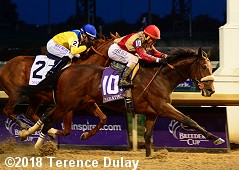 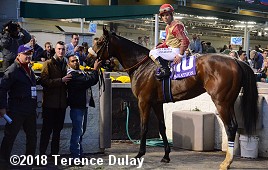 Winning jockey Joel Rosario said, "We had a great trip even with how long the race was. This horse tries so hard every time and it says a lot about a horse's ability when they continue to try hard after running that distance."