Wednesday morning at Churchill Downs was darker and gloomier than Tuesday with periods of heavy rain and bone chilling cold. The track was a sloppy mess so not as many horses were out as yesterday. Most just jogged or galloped, but one did do an actual timed work. While we saw more than the 16 horses pictured below, many of them were the same as on Tuesday so I omitted them today. Click the small picture to see a larger version. 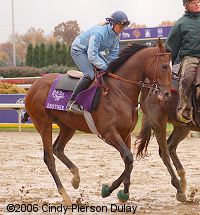 Brother Derek - Classic entrant jogged 1 1/4 miles on the main track. He will break from the rail on Saturday with regular rider Alex Solis aboard, and is a 30-1 longshot on the morning line. 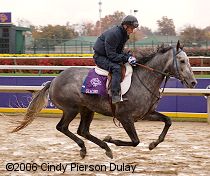 Giacomo - Classic entrant went out for a jog on the main track. The official notes said he simply "walked" but clearly he did more than that. Last year's Kentucky Derby winner drew post 9 as a 30-1 outsider and will have regular rider Mike Smith. 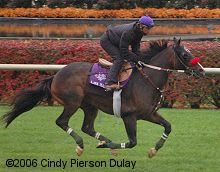 Lava Man - Classic entrant jogged 1 mile on the main track and then galloped 1 1/2 miles on the turf course. He is the 6-1 third choice on the morning line and will break from the 8 post with jockey Corey Nakatani. 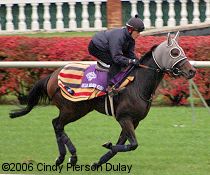 Ouija Board - Filly and Mare Turf morning-line favorite made an odd fashion statement with this thermal head-gear while cantering on the turf course. Frankie Dettori will be aboard the the 8-5 morning line favorite out of post 2. 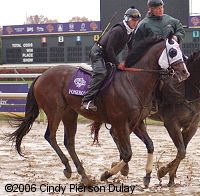 Pomeroy - Sprint contender galloped 1 3/8 miles over the slop. He drew the 8 hole as the 8-1 third choice, and will have Eddie Castro in the irons on Saturday. 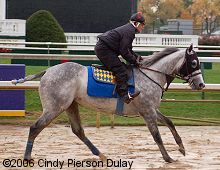 Too Much Bling - Sprint entrant went out for a jog on the main track. The 10-1 shot will have Garrett Gomez aboard and will break from post 9. 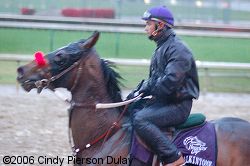 Areyoutalkintome - Sprint entrant galloped 1 1/2 miles in the pouring rain at dawn on the sloppy main track. He is a 30-1 outsider on the morning line, breaking from post 5 with Victor Espinoza in the irons. 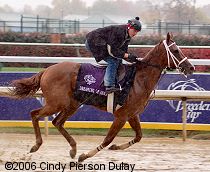 Dreaming of Anna - Juvenile Fillies entrant galloped 1 1/2 miles. She drew the rail as the 4-1 second choice with jockey Rene Douglas. 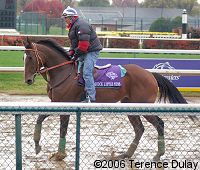 Quick Little Miss - Juvenile Fillies entrant jogged for a mile on the wet track and then schooled in the paddock. Jon Court will be aboard on Saturday, breaking from the 13 post at 30-1. 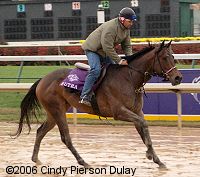 Sutra - Juvenile Fillies entrant galloped 1 1/2 miles on the main track. She drew post 2 as a 20-1 outsider with jockey Mike Luzzi. 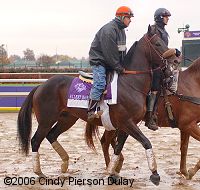 Silent Name - Mile entrant jogged for a mile on the slop. The Japanese-bred will have Victor Espinoza aboard on Saturday as a 20-1 outsider breaking from post 2. 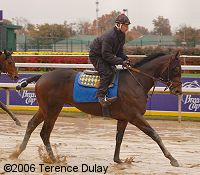 Malt Magic - Juvenile entrant went out for a jog on the sloppy track. Jon Court gets the mount on Saturday aboard the 30-1 shot who drew post 13. 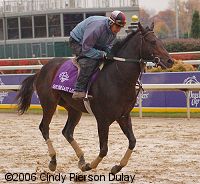 Got the Last Laugh - Juvenile entrant jogged on the main track on Wednesday. He drew post 11 and will have Rene Douglas aboard, and is listed at 20-1 on the morning line. 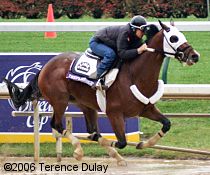 Teuflesberg - Juvenile entrant worked 3 furlongs in 38 4/5 seconds over the sloppy track with trainer Jamie Sanders in the irons. But the move was not planned, said assistant trainer Donnie Kelly. "Because the track wasn't good, we decided to do a two-minute lick (for a mile) instead of working, but he was getting a little strong. They ended up timing him. He has such a nice easy stride you think you're going slower. He went at least 1 1/4 miles before we picked him up with the pony." He drew post 8 and Robby Albarado will be aboard the 50-1 outsider. 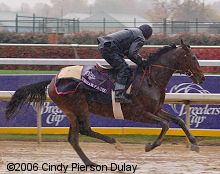 Hurricane Run - Turf morning-line favorite looked like he was running in a hurricane, galloping in a driving rainstorm over the muddy track. Christophe Soumillon will be aboard the 3-1 favorite breaking from the 7 hole. 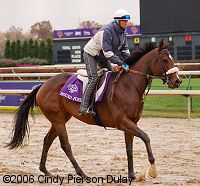 Round Pond - Distaff entrant jogged and cantered 2 miles on the sloppy main track. She drew the rail and is 15-1 on the morning line with Edgar Prado assigned to ride.