Thursday morning at Churchill Downs was a pleasant change with bright, clear sunny skies although the temperature was a bit chilly at 30 degrees. The track was still muddy but drying out as the morning progressed and the turf was not bad and should be firm by Saturday. All the New York horses arrived yesterday afternoon, so there were a lot of new faces to be seen. Trainer Todd Pletcher was not putting the named saddlecloths on his horses, so we have included the ones we could identify through their markings here. In total, there are 30 horses pictured for Thursday and most are ones we did not do on previous days. Click the small picture to see a larger version. 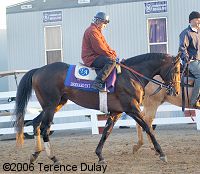 Bernardini - Classic favorite went out for a light 1 1/4 mile gallop and schooled in the starting gate. Trainer Tom Albertrani said, "He looks fantastic. He looks great. He's got a good, healthy coat on him and has been training well. We're pleased with the way he's coming into this race. I would have preferred being a little farther on the outside, but he's got enough speed to get away from there. I could see where he's maybe two or three lengths off the leaders and Javier will just put him in a position where he is happy and comfortable." 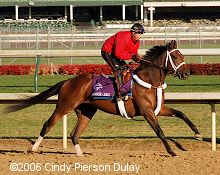 Invasor - Classic contender galloped 1 3/8 miles on the main track. Trainer Kiaran McLaughlin said, "The horse has never been better, has never looked better and has never trained better but the competition has never been better than it is in this race. He's doing fabulous. It's probably worked out in our favor, because we ran him back pretty quick after Dubai. Horses don't usually come back that quick after running in Dubai. It's given him a chance to recover. He's filled out in all the right places." 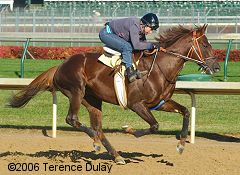 Aragorn - Mile contender galloped 1 mile on the main track under exercise rider Deborah Biggs. Trainer Neil Drysdale said, "I'm fine and so is the horse. All's good by us." 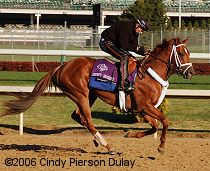 Henny Hughes - Sprint contender went out for a 1 3/8 mile gallop on the main track under exercise rider Barry Downs. Trainer Kiaran McLaughlin said, "Feeling too good to just jog. He was a boy last year. This year, he's a man. I'd really rather have post 9 and have the speed inside him. He'll have to cross over behind the heels of the speed to get position, but Johnny (Velazquez) will work it out." 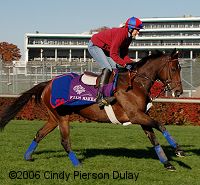 Film Maker - Filly and Mare Turf contender galloped 1 3/8 miles on the turf. "We were considering retiring her last year, but she was doing so well at the time that we decided to give her another chance to win the Breeders' Cup (Filly & Mare Turf)," trainer Graham Motion said. 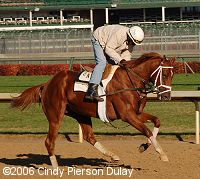 Lawyer Ron - Classic entrant jogged on the main track and schooled in the paddock. "Schooling in the paddock is something we do regularly for big races," said trainer Todd Pletcher, who has a record 17 starters in Saturday's Breeders' Cup World Championships. "We know our horses and their personalities, and if they handle the schooling, it will be an easy day on Friday." 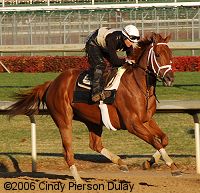 Pool Land - Distaff entrant went out for a jog on the sloppy track. Trainer Todd Pletcher said, "She has the most natural speed of the group, and I would think would be the most forwardly placed, Fleet Indian and Spun Sugar will also be close, but what I don't want to see is them going head-and-head down he backstretch." 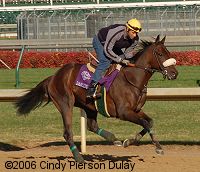 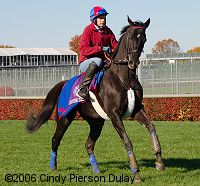 Better Talk Now - Turf contender and 2004 champion galloped 1 3/8 miles on the turf course under exercise rider Lisa Davidson, in preparation for his third straight appearance in the race. Asked if his charge has lost a step over the years, trainer Graham Motion said, "If he's lost a step, I don't see it. Maybe after he runs Saturday I'll say, OK, he has lost a step, but I haven't seen it." 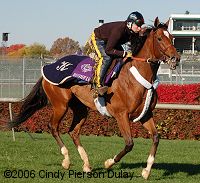 Bushfire - Distaff entrant galloped 1 1/2 miles on the turf. Trainer Eddie Kenneally said, "I'd rather not have her gallop over the main track when it's in that condition (wet). I had to do a little something with her, but I didn't want to risk anything in that slop. It was her first time on turf." Owner Ron Rashinski pondered, "Maybe we could run in the Mile next year?" 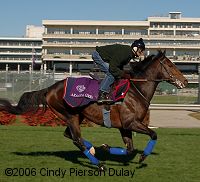 Araafa - Mile entrant went out for a 1 1/4 mile gallop over the turf course with jockey John Velazquez aboard. Trainer Jeremy Noseda said, "John was available and I wanted him to get acquainted with the horse a little. I'm hoping he'll be able to gallop Araafa again tomorrow. I'm very happy with the way he's coming into this race. He's in good shape, he's eating well, and doing well all around. I'm not worried about track condition, because he goes on any ground. The low draw (post three) was a big help. He runs on Lasix Saturday. We've worked him on Lasix at home, and he's done well with it."

Quiet Royal - Filly and Mare Turf entrant went out for a jog on the main track. Asked about why Olivier Peslier is riding one of his charges, trainer Todd Pletcher said, "Olivier is the contract rider for Wertheimer Farm over in France, and they decided they wanted their contract rider to ride in the Breeders' Cup." 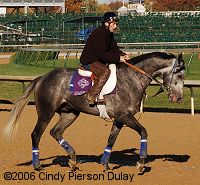 Giacomo - Classic entrant and 2005 Derby winner galloped 1 1/2 miles on the main track under exercise rider Steve Willard. "I flew in on a private jet," trainer John Shirreffs said. "Came with the Mosses (Giacomo's owners Jerry and Ann Moss). If you've got to go, that's the way to go. Nice." 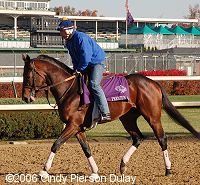 Premium Tap - Classic entrant jogged 2 miles over the sloppy track under exercise rider Jorge Munoz. Trainer John Kimmel said, "He's a horse that's obviously gotten better with age. He's still got room for improvement. I'm sure we haven't seen the best of him yet. We have a dead-fit horse and we've made the pilot change back to Edgar Prado. I think he's going to fire his best shot in the Classic." 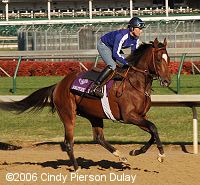 Brother Derek - Classic contender galloped 2 miles on the main track. Trainer Dan Hendricks said, "He went very well. Everything went well. He was getting over it well even as wet as it is out there. Coming off, he was frisky even though he went two miles. He's happy and relaxed. I'd rather have the favorite, but I think we have a legitimate shot. Still, it's nice to come in and not be scrutinized. It's easier to get around and do everything." 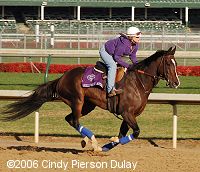 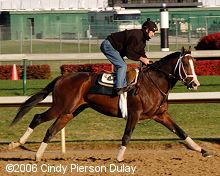 Icy Atlantic - Turf entrant jogged on the main track. Trainer Todd Pletcher said of his race strategy, "He has only one mission, and that is to get to the lead and create a target for English Channel." 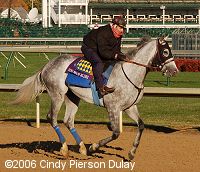 Too Much Bling - Sprint entrant galloped 1 1/4 miles on the sloppy track. Trainer Bob Baffert said, "Sprinters need to be fresh. He looks the best he ever has. He's one of these horses that doesn't really impress in the morning, but if you watch him in the afternoon he's a different horse. He's training great. He's ready. He's going to have to step it up. 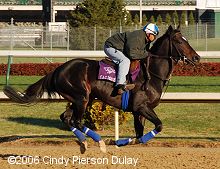 Cacique - Turf entrant galloped 1 1/2 miles on the main track under exercise rider Jose Cuevas. Trainer Bobby Frankel said, "He'll run on anything. (Wednesday) was the first time I ever trained him in the mud. I don't think I would have done that if this wasn't his last race coming. up Saturday. If the course comes up soft Saturday, that'll be fine with me. He runs good on the soft, and I'm not sure all the others do. There's not much that will stop this horse from running his race. He just needs a good run at them." 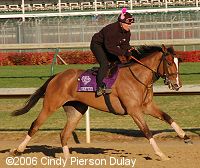 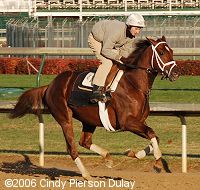 Flower Alley - Classic contender and last year's runner-up went out for a jog on Thursday morning. Trainer Todd Pletcher said, "It's a little frustrating to have to defend a horse who was second in the Classic. I don't know what happened at Saratoga, but I know the track was different – deeper and more demanding. We're hoping he can go back and re-discover his old form, because if he can run back to any of those races, he belongs right with these horses. Hey, he can run lights out on Saturday and be fifth. It's that tough a race." 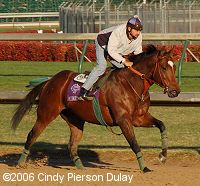 Siren Lure - Sprinter schooled in the paddock and galloped 1 3/4 miles under exercise rider Saul Velasco. Trainer Art Sherman said, "Everything is on schedule. I know you need to get acclimated like humans do when you are coming in from 80 degrees and then it drops down to the 30s. I didn't want to chance it." 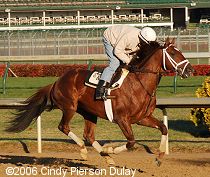 Go Deputy - Turf contender jogged on the main track and then schooled in the paddock. Trainer Todd Pletcher said, "He has a pretty solid record, and he's a Grade 1 winner. He earned his way into this race." 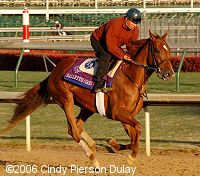 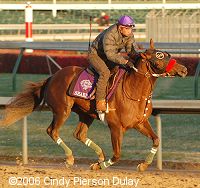 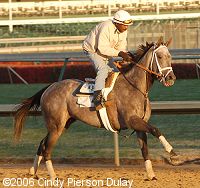 Wait a While - Filly and Mare Turf contender jogged on the main track and schooled in the paddock. Trainer Todd Pletcher said, "She has handled shipping, different surfaces and a brief layoff. She has raced and trained like she should handle the distance." 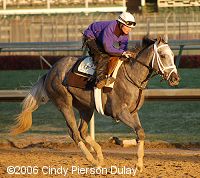 Octave - Juvenile Fillies entrant jogged on the sloppy main track on Thursday. Trainer Todd Pletcher said, "She has really responded and just missed in the Matron. She has looked very impressive." 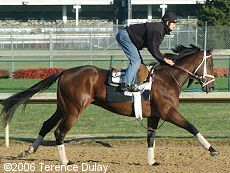 Scat Daddy - Juvenile entrant jogged on the main track and schooled in the paddock. According to trainer Todd Pletcher: "There are some horses that you look at as special. Scat Daddy was one my dad and I picked out, and one that I owned a quarter interest in until recently. "When you have this many horses, you can only stick with your program and with the business of getting them over there. But it was tough with Scat Daddy, especially after Circular Quay went by him to win the Hopeful at Saratoga. You were happy to win a Grade 1, but it probably cost us a million dollars." 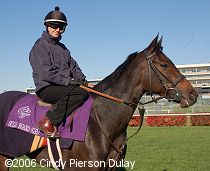 Ouija Board - Filly and Mare Turf favorite and 2004 winner breezed 3 furlongs on the turf in 44 seconds. Trainer Ed Dunlop said, "She has a great attitude, She flourishes wherever she goes and puts on weight whenever she goes abroad. I'm lucky my owner decided to keep her in training after she was injured at York last year. To be able to come once (to the Breeders' Cup) is a thrill, now we're here for a third time having won once and been second last year, and we want to win it again. There has been a lot of questions about the amount of racing she has had this year, but Ouija Board's a freak. She takes her racing well and looks after herself at home. She'll give her best (on Saturday), I hope." 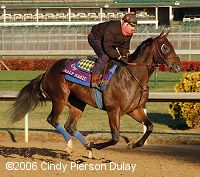