Friday morning at Churchill Downs was quite cold and crisp with clear, sunny skies. The track was mostly dry but a bit crunchy as the wet parts on top had frozen overnight and the turf course was covered with a thick layer of frost. Trainer Aidan O'Brien's horses had cleared quarantine and were out as were Patrick Biancone's fillies who finally shipped in from Keeneland. We also were able to identify some more of Todd Pletcher's horses through their markings today. In total, there are 23 horses pictured for Friday and most are ones we did not do on previous days other than a few of the big name horses like Bernardini. Click the small picture to see a larger version. 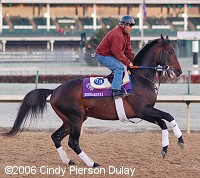 Bernardini - Classic favorite galloped 1 1/4 miles and then schooled in the paddock with regular exercise rider Miguel Gutierrez aboard. Trainer Tom Albertrani was asked whether a win in the Classic would enable Bernardini to clinch the Horse of the Year award. "I would certainly think so. Hopefully, that happens, but I don't want to be overconfident. The horse is doing well and hopefully he just runs his races that he has been running. I think there is more there that we haven't seen. He's done everything so easily right now. If you look back, I think he's only been hit three times in his last four or five races, really. Javier gave him a tap in the Travers and I think that is the last time he really even hit him. He's been easing him up at the finish pretty much every race." 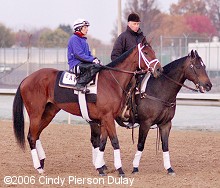 Cotton Blossom - Juvenile Fillies entrant galloped 1 1/4 miles on the main track. Here she is accompanied by trainer Todd Pletcher as she came onto the track. "If we knew then what we know now, the horses we ran at Keeneland would have been ridden differently," Pletcher said. "She's a nice filly who has trained well for what I believe is the most wide-open race on the card." 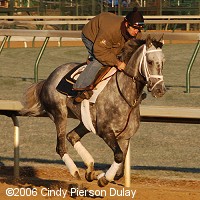 Honey Ryder - Filly and Mare Turf contender galloped 1 1/4 miles on the main track. "She is so tough and so consistent," said trainer Todd Pletcher. "The key with her is to save ground and get her clear for her late kick because she has as strong a kick as there is. There are some tough fillies in this race, but she has more than proven that she belongs, and if she gets the trip that allows her to deliver that big kick, she is going to be hard to beat." 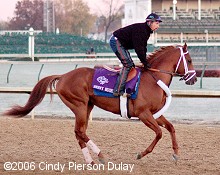 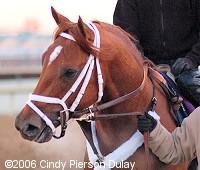 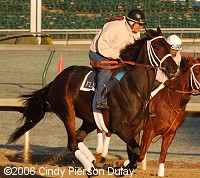 Bel Air Beauty - Juvenile Fillies entrant galloped one lap of the main track. "She's feeling great," said assistant trainer and exercise rider Lisa Sloan. "If it gets any colder, I'm not going to able to ride her. She loves this weather." When asked how he would like to see the race shape up, trainer Frank Brothers said "It's a 14-horse field of very young horses. I just hope for a clean trip." 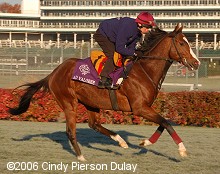 Ad Valorem - Mile contender cantered 1 mile on the turf course. The course was covered with frost on Friday morning. "This horse has plenty of pace. He won three six-furlong races as a two-year-old including the Group 1 Middle Park Stakes-so he can lay up with the pace," jockey Jamie Spencer said when asked about strategy for Saturday. 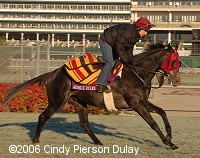 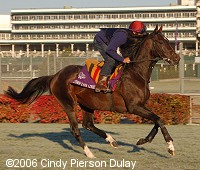 Scorpion - Turf entrant cantered 1 mile on the turf on Friday. Trainer Aidan O'Brien noted his two milers, in company with Turf entrant Scorpion, "just cantered a mile to give them a look at the place." 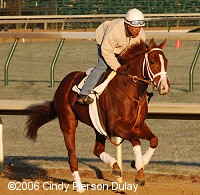 English Channel - Turf contender galloped 1 1/4 miles on the main track. "Even though he ran fourth in the Arlington Million, he proved himself against a strong international field," said trainer Todd Pletcher. "He is always capable of winning any race he is in." 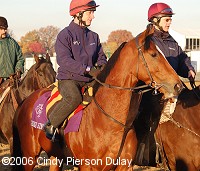 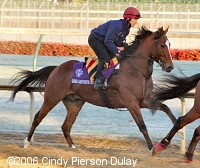 George Washington - Classic entrant cantered 1 lap of the main track. "He's here to run in the Classic so we'll find out if he's going to handle the dirt or be bothered by the dirt in his face," trainer Aidan O'Brien said. "Pat (Lillis) was on him today and he's happy with him. Mick (jockey Kinane) is happy with him," he said. "I'm just off to walk the track with him and the boss (John Magnier)."

We were talking to the guy handling him in the barn later in the day and he said George Washington was the best horse he had ever been around in his 15 year career. He said that the only thing that could beat him in the Classic was the crowd because he is a bad head case, or in his words "dead kinky." 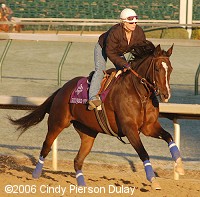 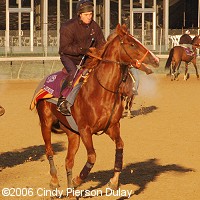 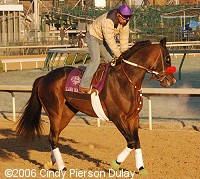 Lava Man - Classic contender jogged and then galloped 1 mile on the main track with exercise rider Antonio Romero. Trainer Doug O'Neill said, "He's showing all the signs of being ready to run a big, big race. He's a real warrior. We have a lot of the main contenders inside of us so that helps a lot, too. Being able to let them commit, or, if they don't commit, we can go on with it. It should be interesting." 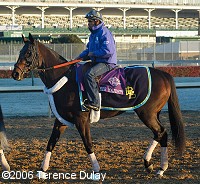 Her Majesty - Juvenile Fillies entrant jogged 1 1/4 miles and schooled in the paddock, shortly after arriving at Churchill from Keeneland. 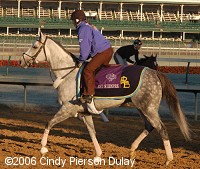 Asi Siempre - Distaff entrant vanned in from Keeneland at 7am and then jogged 1 1/4 miles and then schooled in the paddock at Churchill. 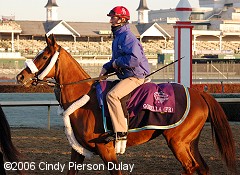 Gorella - Mile contender jogged 1 1/4 miles and schooled in the paddock. Asked how he felt about Gorella's status as 4-1 favorite, trainer Patrick Biancone said, "Any race I run I love being the favorite because it means we have more of a chance. I don't care, I don't bet anyway." 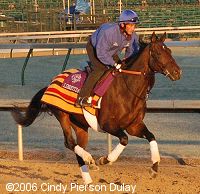 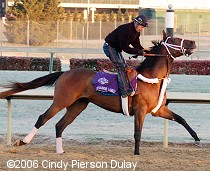 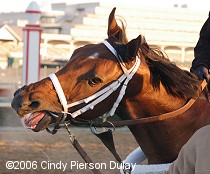 Invasor - Classic contender galloped nine furlongs on the main track with exercise rider Barry Downs. "It looks like there are three or four horses with speed inside of him," said trainer Kiaran McLaughlin while pondering a likely trip scenario for Invasor. "Hopefully, he gets a good start and will be able to slide in from the 11 post and be fifth to eighth, and then come running." 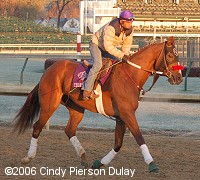 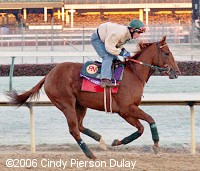 Lilly Carson - Juvenile Fillies entrant galloped 1 1/2 miles on the main track. When asked if his experience with Bill Mott has helped prepare him for this week, trainer Ralph Nicks responded "I think it's helped me probably the most. It's keeping me from getting too rattled at this early stage in my career." 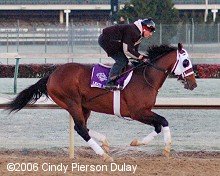 Lewis Michael - Sprint entrant went out for a 1 mile gallop on the main track. 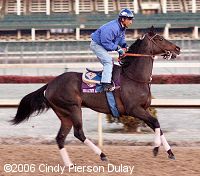 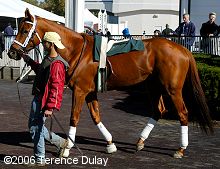 Lemons Forever - Distaff entrant and Kentucky Oaks winner galloped 1 mile on the main track early and then schooled in the paddock late Friday afternoon. Lemons Forever, co-owned by trainer Dallas Stewart and the Horton Stable, is scheduled to go through the auction ring Tuesday at Keeneland. 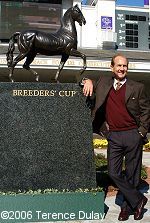 Jerry Bailey poses with the Breeders' Cup trophy in the center of the paddock at Churchill Downs. Bailey retired in January and holds the record for most Breeders' Cup Classic wins.