The world's richest race meeting highlighted by the $12 million Dubai World Cup (G1), will be conducted at Meydan Racecourse in Dubai on Saturday. On Wednesday afternoon the post positions were drawn for the main event, which features some of the best older horses in the world going 2000 meters (about 1 1/4 miles), two turns of the 1 1/8 mile dirt track. Post positions for the big race and the undercard races are available below. An online racecard is available from Dubai Racing Club where you can click on each horse's name to get a form summary.

North America is the 3-1 favorite (at Bet365 at time of writing) off wins in the Maktoum Challenge Round 1 (G2) in January and and Maktoum Challenge Round 2 (G2) in February. He drew post 3 and will have Richard Mullen in the irons for trainer Satish Seemar. In to challenge him include 7-2 second choice and defending champion Thunder Snow ot of post 12 with Christophe Soumillon aboard for Saeed bin Suroor, third in the Breeders' Cup Classic (G1) then 2nd in the Maktoum Challenge Round 3 (G1), and 5-1 third choice Capezzano, who defeated Thunder Snow in Maktoum Challenge Round 3, out of the 2 hole with Mickael Barzalona riding for Salem bin Ghadayer. American invader Seeking the Soul, 2nd in the Pegasus World Cup (G1) is the 13-2 fourth choice in post 5 with jockey Mike Smith, followed by Yoshida, 6th in the Pegasus World Cup Turf (G1) as the 8-1 fourth choice in post 10 ridden by Jose Ortiz.

As has been the tradition at the Dubai World Cup, the horse names are drawn randomly and then the drawn horse's representative comes up and is given 1 minute (timed by a Longines clock) to select one of the available positions. An Emirates flight attendant randomly chooses a jockey helmet replica, which was opened by a steward to reveal the horse name. The horse's representative (usually the trainer but could be owner or jockey) "autographs" the giant touch-screen and then 1 minute timer begins. Within that minute the representative places their hand on the starting gate position they want. The undercard races were drawn using the standard "double blind" system.

North America was the first horse drawn and jockey Richard Mullen chose post 3. He said, "We looked at it this morning and thought three or four would have been good. The problem with stall one is you are loaded up first. He hasn't put a foot wrong this year, we've schooled him out of the gates at home, and I think it was just one of those things. I'm happy with the draw and the horse is in great form. He's such a big-striding horse. People don't really realise how fast he is really going, because he looks like he's half-pacing it while he's actually moving along quickly. He's a powerhouse and his stride, he just kills horses off with it." He finished 10th last year but is the favorite this year.

Along with the five Group 1 events, there are 3 Group 2 events (for Thoroughbreds) carded. The $2.5 million UAE Derby (G2) features northern hemisphere 3-year-olds and southern hemisphere 4-year-olds going 1900 meters (1 3/16 miles) on the main Tapeta, worth 100 points to the winner as part of the Kentucky Derby Championship Series (although 4-year-olds do not qualify), with locally-based Divine Image (post 6) and Walking Thunder (post 1) expected to be favored. This spectacular night of racing kicks off with the $1 million Dubai Kahayla Classic (G1) for purebred Arabians, followed by the $1.5 million Godolphin Mile (G2) at 1600 meters (1 mile) on dirt and the $1.5 million Dubai Gold Cup (G2) at 3200 meters (2 miles) on turf.

The saddlecloth numbers correspond to post positions barring any late scratches. The World Cup goes off at 12:40PM (all times Eastern), while the first race is the $1 million Dubai Kahayla Classic for Purebred Arabians at 7:45AM. The table to the right has all the post times.

Since betting is illegal in the UAE, the international wagering hub is located in South Africa and their rules apply. Win, exacta, trifecta, superfecta, daily double (Sheema Classic and World Cup), and rolling Pick 3 wagering are the same as the American versions, however, there is no show pool but bets to place pay to third place, like a show bet normally would. Since Dubai won't do odds, the morning line odds shown below are from SkyBet at time of writing.

The races will be shown live on TVG in the U.S. and HPI-TV in Canada, as well as at racetracks and simulcast sites. In addition, NBC Sports Network will show the World Cup starting at 12:30pm ET. The locally produced show on Dubai Racing Channel can be viewed live here starting at 7:00am ET. Free Equibase past performances are also availsble. 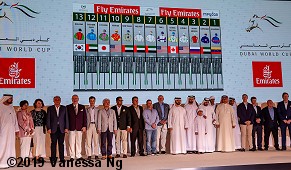 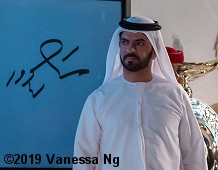 Right: Thunder Snow was the next to last horse drawn, leaving Saeed bin Suroor with just the 12 or 13 left, and he took the 12. He said, "We were hoping for something in the middle, 5 or 6. He won last year from Gate No 10 but is in 12 this time. It's still good from our side. I know the horse has a good turn of foot to take a good position early. But the horse is in good form. He worked very nicely on Saturday. We now hope he jumps out well and take a nice position early in the race. There are some nice horses in the race but I'd just like to see Thunder Snow in a handy position," he said. "Of course Thunder Snow has the experience of running at Meydan and it may be an important thing. But as much as that counts, it's also important to have that class, the pace, and there are so many things you need to look. I brought him twice here on Super Saturday. He's there now. The horse is doing good; he's a class horse" 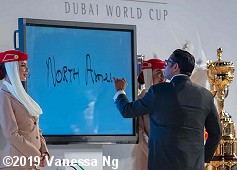 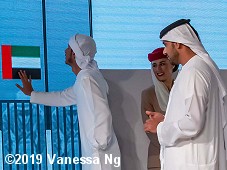 Left: Satish Seemar and jockey Richard Mullen got post 3 for North America. Seemar said, "This year we have gone up a little bit, but three is a safe draw for him, and we were hoping like to get three to five for him, or even six. He's done absolutely nothing wrong this season. He's good when fresh, and we allowed him a little more time by not running him on Super Saturday's Al Maktoum Challenge Round 3. We hope it works out perfect for him. As you know the 1 1/4 gate placement is right in front of the big screen, surrounded by the two most powerful speakers you'll ever know. The World Cup day was a different sound, different crowd, different noise."

Right: Salem bin Ghadayer chose post 2 for Capezzano. He said, "I believe in this horse and Gate 2 suits him fine for his style of running. The distance was a concern but he has proved he can handle it. He used to be a bit tricky but with experience he's much, much better than before. I'm now relaxed with his Gate 2 draw." 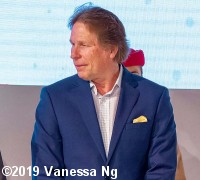 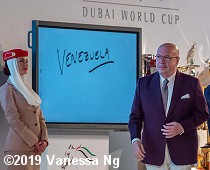 Left: Trainer Dallas Stewart chose post 5 for Seeking the Soul. He said, "We think we're going to run well in just a great group of horses. He was second in the Breeders' Cup and second in the Pegasus, so he has the credentials to be here. I think he has a heck of the shot." Jockey Mike Smith added, "When I got an opportunity to ride this horse I was very excited. It's always nice to come back and ride 00another World Cup. Regardless of whether you are the favorite or not, I still believe I am coming in with a good chance here. This horse is coming here a little bit under the radar and honestly, he is not the favourite either as he's been a bit unlucky during the last few trips. With a really good trip, I think I've got a good chance to win with him."

Right: Gunnevera's owner Solomon Del-Valle signed "Venezuela" for him when it was their turn to chose a post. His trainer, Antonio Sano, and owners Solomon Del-Valle and Guillermo Guerra are all from Venezuela.