The $2 million UAE Derby (G2) over 1900 meters (1 3/16 miles) on the main track at Meydan is the only age-restricted race on World Cup night, open to 3-year-olds and does score 100 points to the winner under the Kentucky Derby Championship Series, however southern hemisphere 3-year-olds are recognized as 4-year-olds in the north and are not eligible for the Kentucky Derby. Undefeated Polar River was sent off as the 3-5 favorite in the field of 7 off her wins in the UAE 1000 Guineas and UAE Oaks (G3). In to challenge her include 7-2 second choice Vale Dori, runner-up in the UAE Oaks, and 5-1 third choice Frank Conversation, winner of the California Derby and the El Camino Real Derby (G3) at Golden Gate.

Vale Dori and 71-1 longest shot On The Rocks battled for the early lead through fractions of 26.49 and 50.44 while stalked by Frank Conversation. On the far turn, 28-1 Yu Change, 5th early, moved up to take over the front through 3/4 in 1:14.14 and the mile in 1:38.90. 6-1 fourth choice Lani, last for the first 5 furlongs after an awkward start, came out for room to gain the lead in midstretch, and was all out to hold off late-running favorite Polar River by 3/4 length in a time of 1:58.41 over the fast main track. It was a neck back to Yu Change third. 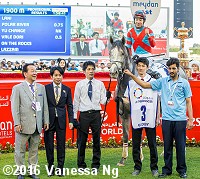 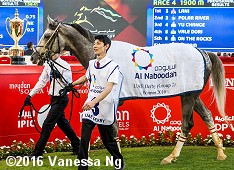 Left: Lani in the winner's enclosure. Winning jockey Yutaka Take said, "He's a very strong horse so I really thought I had a good chance in the race. Even though he tripped at the start he travelled really well throughout. Right now he's still rather immature so he's got a lot of growing up to do. He's getting better and better and I'd like to go to Kentucky. The owners have been very keen on the idea of going for the Kentucky Derby for some time, and I think that is still the plan."

Right: Lani with his new winner's blanket. Trainer Mikio Matsunaga said, "Of course, we will go to the Kentucky Derby, and I'd like to get the first prize." 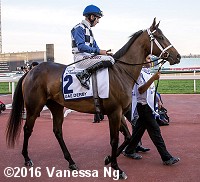 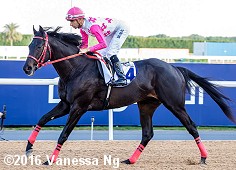 Left: Second place finisher and beaten favorite Polar River heads out to the track before the race. Trainer Doug Watson said, "She was tight for room at a critical point after the turn-in. She stayed on very well again at the end. If anything she's still a bit green. But going forward she's going to be a superb filly as she matures. It was still a good run."

Right: Third place finisher Yu Change warms up before the race. Jockey Joao Moreira said, "I went into the lead at about the 900m-marker. The pace was slow, I thought we were going to hold on but in the last 100m he tired. That 1900m is just a little too far for him.  He wasn't one of the horses that I expected to win but he nearly got it."