The world's richest race meeting and the world's richest horse race, the $10 million Dubai World Cup (G1), will be conducted at Meydan Racecourse in Dubai on Saturday. On Wednesday afternoon the post positions were drawn for the main event, which features some of the best older horses in the world going 2000 meters (about 1 1/4 miles), two turns of the 1 1/8 mile dirt track. Post positions for the big race and the undercard races are available below. An online racecard is available from Dubai Racing Club where you can click on each horse's name to get a form summary. AmWest Entertainment has free past performances here. A Form Guide which has past performances for the entire card is also available from Emirates Racing Authority.

As expected last year's runner-up California Chrome is the DRF morning line favorite at 3-2, despite drawing post 11 in the 12 horse field. Victor Espinoza gets the call again for trainer Art Sherrman. In to challenge him include Pennsylvania Derby (G2) and Al Maktoum Round 2 (G2) winner Frosted, who is 2-1 and will break out of the 9 post under William Buick for trainer Kiaran McLaughlin, and 8-1 third choice Mshawish, winner of the Donn Handicap (G1), who drew the 2 hole for trainer Todd Pletcher and new jockey Frankie Dettori.

Art Sherman, forced to choose the rail or the 11 for the favorite, said, ōThe outside draw is good if youÆve got the horse and I hope we have. There wasnÆt too much I could do about the draw. HeÆs got tactical speed so IÆm not going to worry about it.ö Frosted's trainer Kiaran McLaughlin said: "We were hoping to be outside of the speed. Special Fighter (post 5) is speed as is California Chrome. We didn't want to go all the way outside. There's a long run into the first turn which should help us secure position.ö Mshawish's exercise rider Nick Bush said, ōI think heÆs better on the dirt than the turf, for sure. Now that we are figuring him out, he is unreal. HeÆs versatile. HeÆs solid. He has a good foundation under him. HeÆs one of the best IÆve been on; IÆve never seen anything like him. HeÆs a big horse to watch (in the Dubai World Cup). IÆm thinking this is our chance to win.ö

The undercard features the two richest turf races in the world, the 2410 meter (about 1 1/2 mile) Sheema Classic (G1) and the 1800 meter (about 1 1/8 mile) Dubai Turf (G1), worth $6 million each. In the Sheema Classic, carded immediately before the main event, Postponed (post 7), Duramente (4), and Highland Reel (8) are expected to be favored in the betting, while Tryster and Intilaaq are expected to go off at short odds in the Turf. Top dirt sprinters go 1200 meters (6 furlongs) in the $2 million Dubai Golden Shaheen (G1), trainer Jorge Navarro shipped in his Gulfstream Park Sprint (G2) winner X Y Jet as the heavy favorite over Confrontation. The $1 million Al Quoz Sprint (G1) features turf sprinters going 1000 meters (5 furlongs) on the straightaway.

Along with the four Group 1 events, there are 2 Group 2 events and a Group 3 race carded. The $2 million UAE Derby (G2) features northern hemisphere 3-year-olds and southern hemisphere 4-year-olds going 1900 meters (1 3/16 miles) on the main Tapeta, worth 100 points to the winner under the Road to the Kentucky Derby (although 4-year-olds do not qualify), with Polar River and Vale Dori expected to be favoried. The night starts off with the $1 million Dubai Kahayla Classic (G1) for purebred Arabians, followed by the $1 million Godolphin Mile (G2) at 1600 meters (1 mile) on dirt and the $1 million Dubai Gold Cup (G3) at 3200 meters (2 miles) on turf.

The saddlecloth numbers correspond to post positions barring any late scratches. The World Cup goes off at 1:00PM (all times Eastern), while the first race available for American bettors, the $1 million Godolphin Mile (G2) off at 8:20AM. The table to the right has all the post times for the races being simulcast to the US. The first live race at Meydan is the $1 million Dubai Kahayla Classic for purebred Arabians (post time 7:45AM) and is not available for wagering in the US.

Since betting is illegal in the UAE, the international wagering hub is located in South Africa and their rules apply. Win, exacta, trifecta, superfecta, daily double (Sheema Classic and World Cup), and rolling Pick 3 wagering are the same as the American versions, however, there is no show pool but bets to place pay to third place, like a show bet normally would. Since Dubai won't do odds, the morning line odds shown below are from DRF at time of writing. 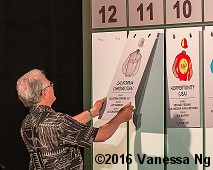 Left: The Dubai World Cup connections post for a group shot after the post position draw. Last's year's UAE Derby winner Mubtaahij is in the big event this year out of post 4. Matt De Kock, assistant to father Mike said, ōWe didnÆt want to be one but wanted to be on the inside as there has tended to be inside bias through the season. The horse is peaking at the right time and should give a good account of himself.ö 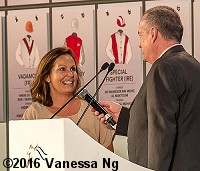 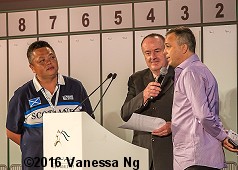 Left: Dana Barnes, assistant to trainer Bob Baffert, is interviewed by Meydan track announcer Terry Spargo after selection post 10 for Hoppertunity. Barnes said, ōThat was really our only choice ¢ one or ten and so we had to pick outside.ö

Right: Trainer Caspar Fownes is interviewed as owner Cheng Chung-Wah looks on after Gun Pit was drawn first to select a post position. They selected post 3. Fownes said, "IÆm very happy with that, it was a great opportunity, to get first crack at the draw. We decided to take 3, that gives us the chance to work out how the trackÆs playing on the night. If itÆs one-dimensional, like it was last time we were here, weÆll take advantage and go forward; if it seems to be a fair track, we have the chance to just sit in behind the speed and see what happens. Realistically, heÆs a top five finish, but if the trackÆs fair he has a chance to be in the first three or four.ö 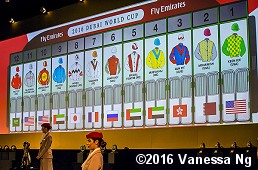 The draw board for the 2016 Dubai World Cup. Owner Jerry Crawford took the rail for Keen Ice. He said, "The thing that made it attractive was that it was that or the 11 or the 12. We have speed drawn to our immediate inside (Mshawish), so we should have room to maneuver and navigate from there. We are going to be first time blinkers so I think that will make him a little keener, excuse the expression."