The $5 million Dubai Sheema Classic (G1) is the last of four scheduled turf races held on Dubai World Cup night. A field of 10 older horses went 2410 meters (about 1 1/2 miles), one complete circuit of the turf oval at Meydan Racecourse in Dubai. Breeders' Cup Turf (G1) winner St Nicholas Abbey was sent off as the 9-5 favorite over 7-2 Cirrus des Aigles, second in the Prix Meydan Hotel last out at Chantilly, and 7-2 Beaten Up, undefeated in 3 starts including the St. Simon Stakes at Newbury.

Jockey Christophe Soumillon sent 15-1 Bold Silvano to the lead first time past the stands and he set fractions of 27.24, 53.44, and 1:18.64 over the good turf, while stalked by Cirrus des Aigles and 12-1 Songcraft. With half a mile to go, jockey Olivier Peslier sent Cirrus des Aigles to take over the lead, through 1 mile in 1:43.61. At the top of the stretch, Bold Silvano tired badly to finish last, with 8-1 Treasure Beach, 4th early, moving up to gain second through 1 1/4 miles in 2:07.21 before tiring as well. St Nicholas Abbey, 7th early, closed with a rush late but Cirrus des Aigles held him off to win by a neck in 2:31.30. It was another 3 1/2 lengths back to late-running 28-1 Jakkalberry third. 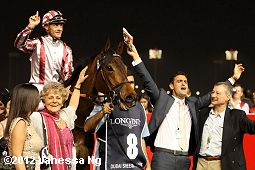 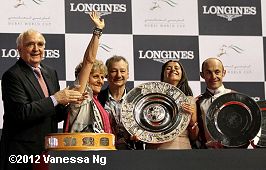 Right: The trophy presentation for the Sheema Classic with winning trainer Corine Barande-Barbe waving. Barande-Barbe is the first female trainer to win a race on the Dubai Gold Cup card. She said, "If a horse comes from behind it pushes him. It is a big emotion for me. I was very happy - with him he always comes better and better. It is just like a dream that never stops. He really likes very, very big racecourses." 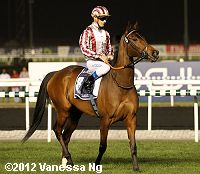 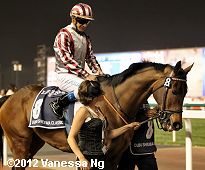 Left: Cirrus Des Aigles in the post parade. Winning jockey Olivier Peslier said, "We didn't go very fast but I knew I was on a horse that had a lot of speed so I went straight away close to the leader. There was hardly any pace and he started to pull so I just let him go and he finished really well. I could see St Nicholas Abbey and I knew it was going to be tight and he held on. The trainer said the horse was very tough and as long as you ask him, he's always very competitive."

Right: Cirrus Des Aigles in the walking ring before the race. 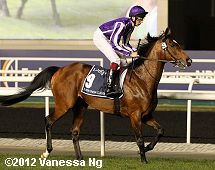 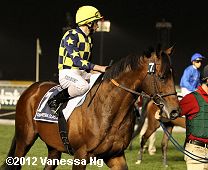 Left: Second place finisher St Nicholas Abbey in the post parade. Jockey Joseph O'Brien said, "They went very slow and he was giving them a bit of a start and the post came just a bit too soon." Aidan O'Brien, trainer of both St Nicholas Abbey and 4th place finisher Treasure Beach added, "I was delighted with them, they ran two great races for their first run of the season, great runs. The winner is a very good horse, and she does a great job with him."

Right: Third place finisher Jakkalberry in the walking ring before the race. Trainer Marco Botti said, "The plan would be eventually the Melbourne Cup, he is qualified for it and he will get in." Jockey Ryan Moore added, "He missed the break a little bit but the plan was to take our time. He finished off well. For him to be third in a race like that is very good."

The $1 million Dubai Gold Cup (G3), formerly known as the DRC Gold Cup and contested at 3200 meters (about 2 miles) on the turf, was moved to the World Cup card this year, and was originally scheduled as the 3rd race on the program. However, Godolphin entrant Fox Hunt broke down at the top of the stretch as the field went by the stands first time, and had to be euthanized on the course. Due to the location of the incident, the race was called off by the stewards and the field pulled up at the 7/8 pole. All bets placed on the race from North America were refunded. After consulting with the connections and having every horse checked by veterinarians, the decision was made to run the race at the end of the card, after the World Cup. The re-run was a non-wagering event in North America but the world pool was still in effect for other countries.

Opinion Poll was sent off as the 10-11 favorite in the field of 12, off 3 straight second place finishes including the Nad al Sheba trophy (G3) last out. In to challenge him included 9-2 second choice Barbican, off his win in the Wildflower Stakes at Kempton, and 8-1 Mikhail Glinka, winner of the Dubai City of Gold (G2) last out.

Makani Bisty went to the lead first time by and he set fractions of 27.18, 51.80, 1:17.17, and 1:43.54 over the good turf, while pressed by Mikhail Glinka and Irish Flame. At the 1/2 mile pole, Unusual Suspect, 6th early, moved up to take the lead through 1 1/2 miles in 2:33.64 before tiring. At the 1/4 pole, Opinion Pole. who had bided his time in 7th for the first mile, gained the lead, and was all out to hold off late-running Joshua Tree by 3/4 lengths to win in 3:23.73. It was a head back to Zanzamar third. The re-run was also marred by fatalities, as both Bronze Cannon and Grand Vent, both pulled up during the race, were later euthanized. 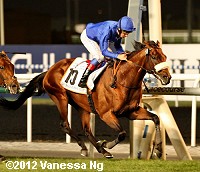 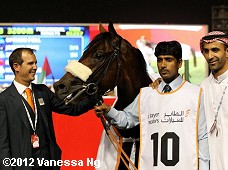 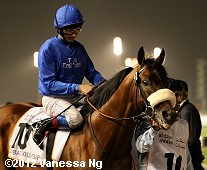 Left: Opinion Poll in the winner's enclosure. Jockey Frankie Dettori said, "It's been a great night for the team and I'm pleased it's gone so well for us. I was very happy to win this race and it all went according to plan. I think we'll target the Ascot Gold Cup in June."

Right: Opinion Poll heads out to the track before the race. 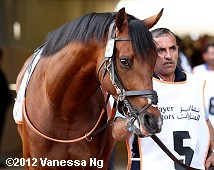 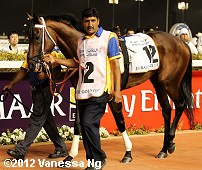 Left: Second place finisher Joshua Tree in the walking ring. Jockey John Murtagh said, "I got a bit held up at the turn. It cost me a bit of ground, but Frankie (Dettori) gave his horse a great ride and got first run on us and we could only get close to him at the finish."

Right: Third place finisher Zanzamar in the walking ring. Jockey Richard Hills, riding the last race of his career, said, "He ran a cracking race. We weren't sure if he would stay, but he did and there will be more races for him at this sort of distance."