The world's richest race meeting and the world's richest horse race, the $10 million Dubai World Cup, will be conducted at Meydan Racecourse in Dubai on Saturday. On Wednesday evening the post positions were drawn for the Dubai World Cup (G1), which features some of the best older horses in the world going 2000 meters (about 1 1/4 miles) on the main Tapeta synthetic track. Post positions for the big race and the undercard races are available below. An online racecard is available from Dubai Racing Club where you can click on each horse's name to get a form summary. Daily Racing Form has free past performances and other information here. A Form Guide which has past performances for the entire card is also available from Emirates Racing Authority.

Top American hope Game On Dude is the 3-1 morning line favorite and drew the outside post 14, last year's Breeders' Cup Classic (G1) runner-up, and coming to Meydan off a 5 1/4 length romp in the San Antonio (G2) at Santa Anita. Regular rider Chantal Sutherland will be in the irons for trainer Bob Baffert. In to challenge him include 5-1 second choice So You Think in the 4 hole, unraced since finishing sixth in the Breeders' Cup Classic (G1). New jockey Joseph O'Brien gets the call for his father, trainer Aidan O'Brien. Royal Delta, last year's Breeders' Cup Ladies' Classic (G1) winner, will attempt to become the first female World Cup winner and is one of three horses at 8-1 morning line. She finished a distant second last out at Gulfstream in the Sabin Stakes (G1). Regular rider Jose Lezcano will load into post 7 for trainer Bill Mott.

Bernie Schiappa, owner of Game On Dude, said, “Perfect (post) position. Lanni (part owner of Game on Dude who passed away last year) was born on March 14, so 14 is a special number for us. It’s perfect. The outside is fine with me. I can’t repeat what Bob (trainer Baffert, in hospital) said on the phone.” Jockey Chantal Sutherland concluded: “It’s fine. Whatever happens, I’ll deal with it. He has a tendency to sometimes break slow and if he was to do that, it could put us in a bit of a predicament on the rail, so on the outside we have more options.”

Bill Mott, trainer of Royal Delta said, “It’s the middle of the field. She’ll get a good look at the field from there and number seven has been our lucky number. We’d love for her to win. The reason we’re really here is to see if we can win. I can’t predict the outcome but she is doing really well – well enough to win a race like this.”

Along with the four Group 1 events, there are 2 Group 2 events and a Group 3 race carded. The $2 million UAE Derby (G2) features northern hemisphere 3-year-olds and southern hemisphere 4-year-olds going 1900 meters (about 1 3/16 miles) on the main Tapeta, with Lucky Chappy in from Florida for Graham Motion to take on Breeders' Cup Juvenile Turf winner Wrote. The night starts off with the $500,000 Dubai Kahayla Classic (G1) for purebred Arabians, followed by the $1 million Godolphin Mile (G2) at 1600 meters (1 mile) on Tapeta and the $1 million Dubai Gold Cup (G3), the newest addition to World Cup night, at 3200 meters (2 miles) on turf.

The saddlecloth numbers correspond to post positions barring any late scratches. The World Cup goes off at 1:40PM (all times Eastern), while the first race available for American bettors, the $1 million Godolphin Mile (G2) off at 9:15AM. The table to the right has all the post times for the races being simulcast to the US. The first live race at Meydan is the $250,000 Dubai Kahayla Classic for purebred Arabians (post time 8:35AM) and is not available for wagering in the US.

Since betting is illegal in the UAE, the international wagering hub is located in South Africa and their rules apply. Win, exacta, trifecta, superfecta, daily double (Sheema Classic and World Cup), and rolling Pick 3 wagering are the same as the American versions, however, there is no show pool but bets to place pay to third place, like a show bet normally would. Since Dubai won't do odds, the morning line odds shown below are from DRF's past performance file. 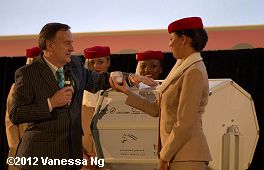 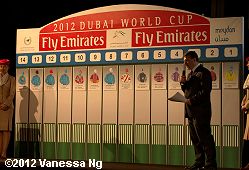 Boxes containing the horse's names were placed in the barrel, mixed up, then randomly drawn out 1 at a time. When a horse's name was announced, the connections hung the name on the gate they wanted. Game On Dude was the last out of the barrel and ended up with the far outside stall.